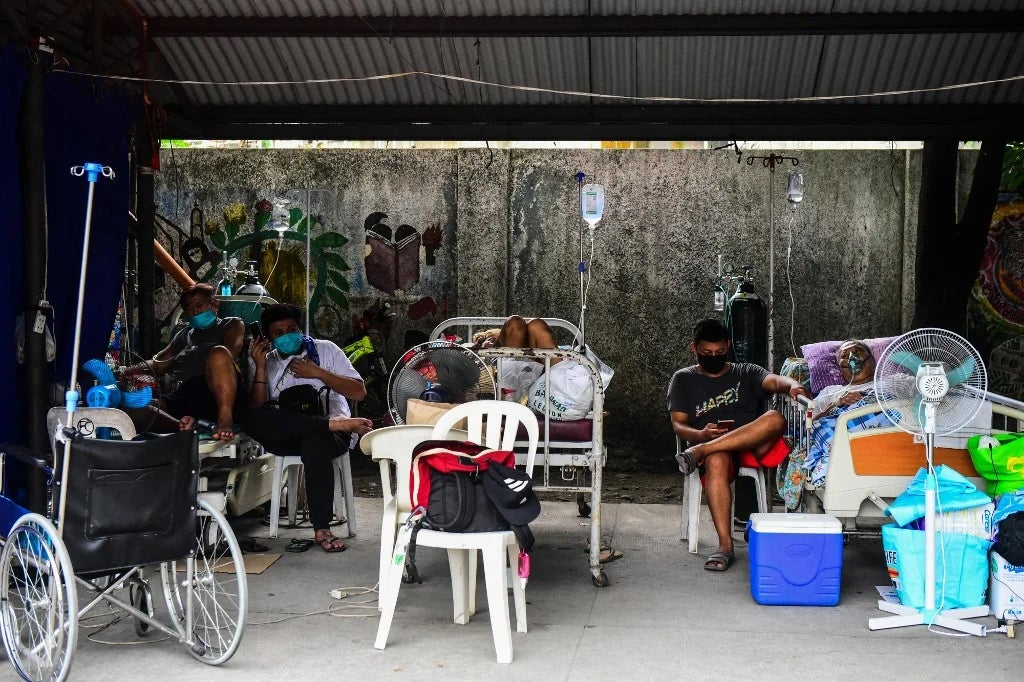 FILE PHOTO: Suspected Covid-19 patients and relatives rest in a parking lot turned into a covid ward outside a hospital in Binan town, Laguna province south of Manila on September 6, 2021, with record infections fuelled by the hyper-contagious Delta variant. (Photo by Maria Tan / AFP)

MANILA, Philippines—A 73 percent cut in funding for COVID response. An 11 billion-peso increase in the budget for a counterinsurgency task force created by President Rodrigo Duterte.

A close look at the numbers in the 5-trillion peso proposed national budget in 2022 would show where the Duterte administration, outgoing in several months, is headed in terms of spending preference in its last expenditure proposal to Congress.

As both chambers of Congress—Senate and House of Representatives—now deliberate on the proposed budget, it would be interesting to take a closer look at the numbers.

INQUIRER.net tries to break down the proposed P5.024 trillion national budget for 2022 based on documents from the Department of Budget and Management (DBM).

According to DBM data, the proposed P5.024 trillion national budget for 2022 increased by 11.5 percent or is P518 billion higher than the adjusted 2021 budget amounting to P4.506 trillion.

Proposed allocations per sector in 2022 were: 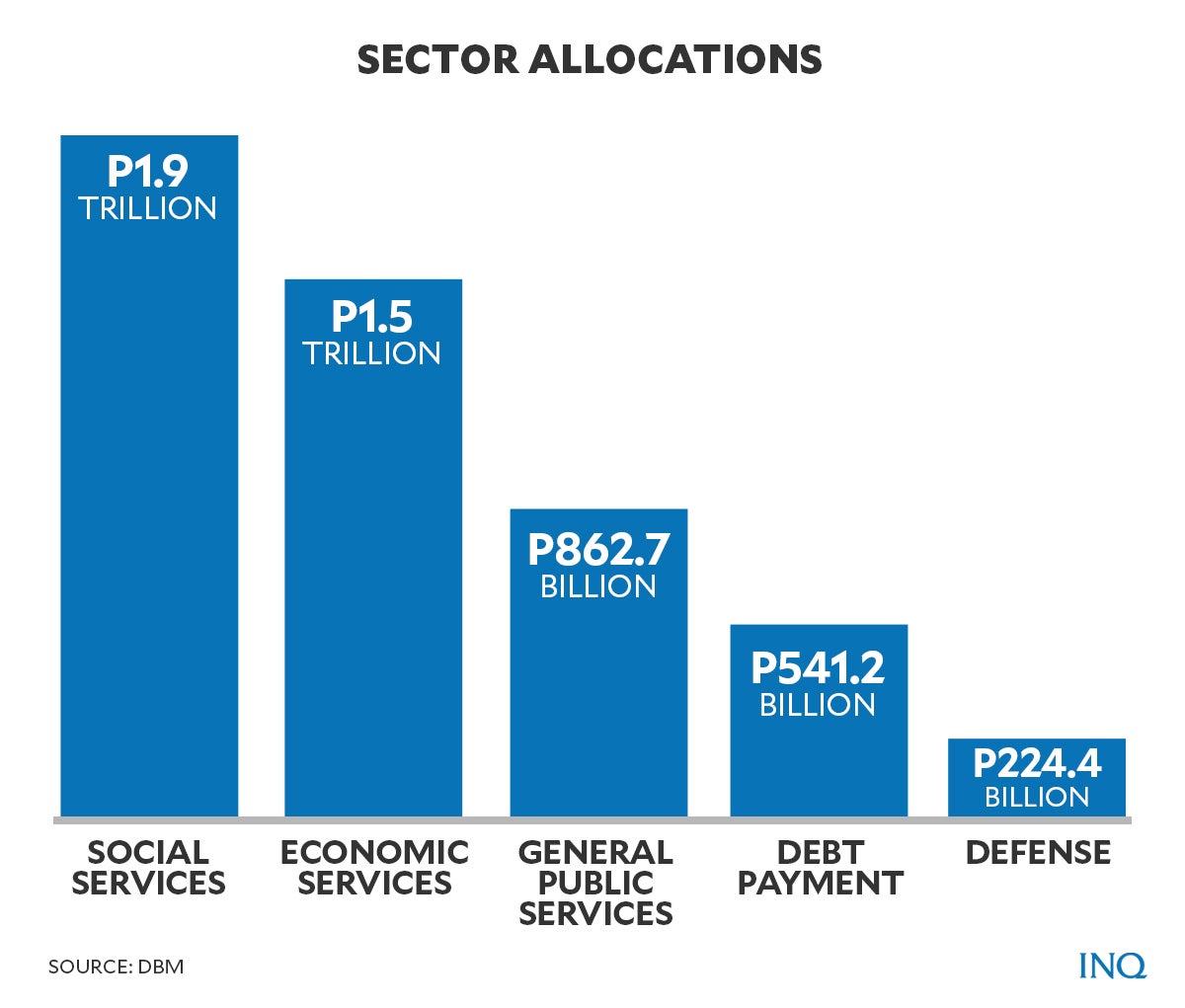 In the proposed 2022 National Expenditure Program (NEP) report, the DBM said the allocations “reflect the administration’s thrust to address the impact of the COVID-19 pandemic and resume the path towards inclusive economic growth.”

The proposed P5.024 trillion 2022 expenditure program will be divided among various government departments.

From the proposed P5.024 trillion expenditure program, at least P2.8 trillion would be allocated to departments. It is equivalent to a 5.76 percent increase from the P2.7 trillion allotted for departments this year.

According to documents from the DBM, the top 10 highest recipients of the proposed 2022 budget will get around P2.6 trillion, or 93.4 percent, of the total allocation for departments.

The education sector will again have the highest allocation with P773.6 billion—15.4 percent of the total 2022 budget—higher than P751.7 billion under the 2021 program.

The Department of Education (DepEd) will get a P630.8 billion budget for 2022. The DBM said this will cover “basic education, development, reproduction and delivery of learning resources for basic education-learning continuity plan, computerization program, among others.”

For tertiary education, around P75.4 billion will be given to state universities and colleges (SUCs), P52.6 billion for the Commission on Higher Education (CHED), and P14.7 billion for Technical Education and Skills Development Authority (TESDA).

The DBM said the appropriation will support the implementation of the law on universal access to quality tertiary education and other programs like financial assistance for students in SUCs and private educational institutions.

The second highest allocation, P686.1 billion, is going to the Department of Public Works and Highways (DPWH).

In 2020, DPWH also ranked second among the top 10 departments in terms of budget allocation. But the DPWH allocation in 2022 would be 1.4 percent—P9.6 billion—lower than the P695.7 billion that was given to the department in 2021.

The budget slash, according to the DBM, was caused by the devolution of some programs to local government units (LGUs) with the implementation of the Mandanas ruling of the Supreme Court which increased the share of LGUs in national revenue.

The DPWH is followed by the Department of Interior and Local Government (DILG) with P250.4 billion.

But the 2022 budget allocated for DPWH—which implements  Duterte’s Build, Build, Build program—and DILG were much higher than that for the Department of Health (DOH).

The DOH, which included PhilHealth, will get P242 billion in the 2022 spending program. The budget for DOH included funding for the country’s COVID-19 response for 2022. 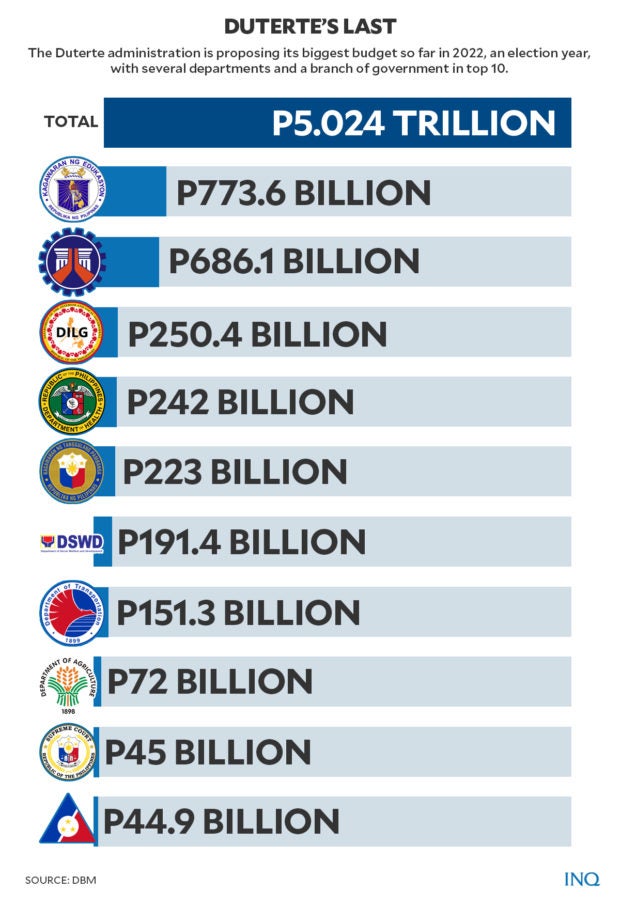 Also among the top 10 departments and branch of government with the highest allocation were:

But removed from the 2022 spending plan was the allocation for the DOTr’s “Libreng Sakay” program which offered free rides to workers and those on the frontline of the battle against COVID at the height of the still ongoing pandemic.

The P10 billion proposed budget by the DOTr to fund Service Contracting Program (SCP) and free-ride service was scrapped by the DBM.

At least P190.6 billion will be allocated to other departments that are not on the top 10 list.

Among the notable agencies outside the top 10 is the Commission on Elections (Comelec) with a proposed budget of P26 billion for 2022—80.41 percent higher than its 2021 budget of P14.8 billion.

But according to the Comelec, the DBM slashed 37 percent from its original P41.9-billion proposed budget. The agency said the budget cut will have an impact on preparations for the 2022 national and local elections.

“A lot of things in our budget will be affected. One of them is our COVID-19 preparation,” Comelec spokesperson James Jimenez said.

“The other big thing that will be affected is the request of our teachers,” he said. The DepEd, according to Jimenez, is asking for an increase in honoraria and other benefits of teachers who would be tapped for election duty.

The National Task Force to End Local Communist Armed Conflict (NTF-Elcac) is among the government agencies which will get a huge increase in its budget allocation for 2022.

Under the 2022 expenditure program, NTF-Elcac—the government’s counterinsurgency task force — will get a P29.2 billion budget, which is P11 billion higher than its 2021 budget. 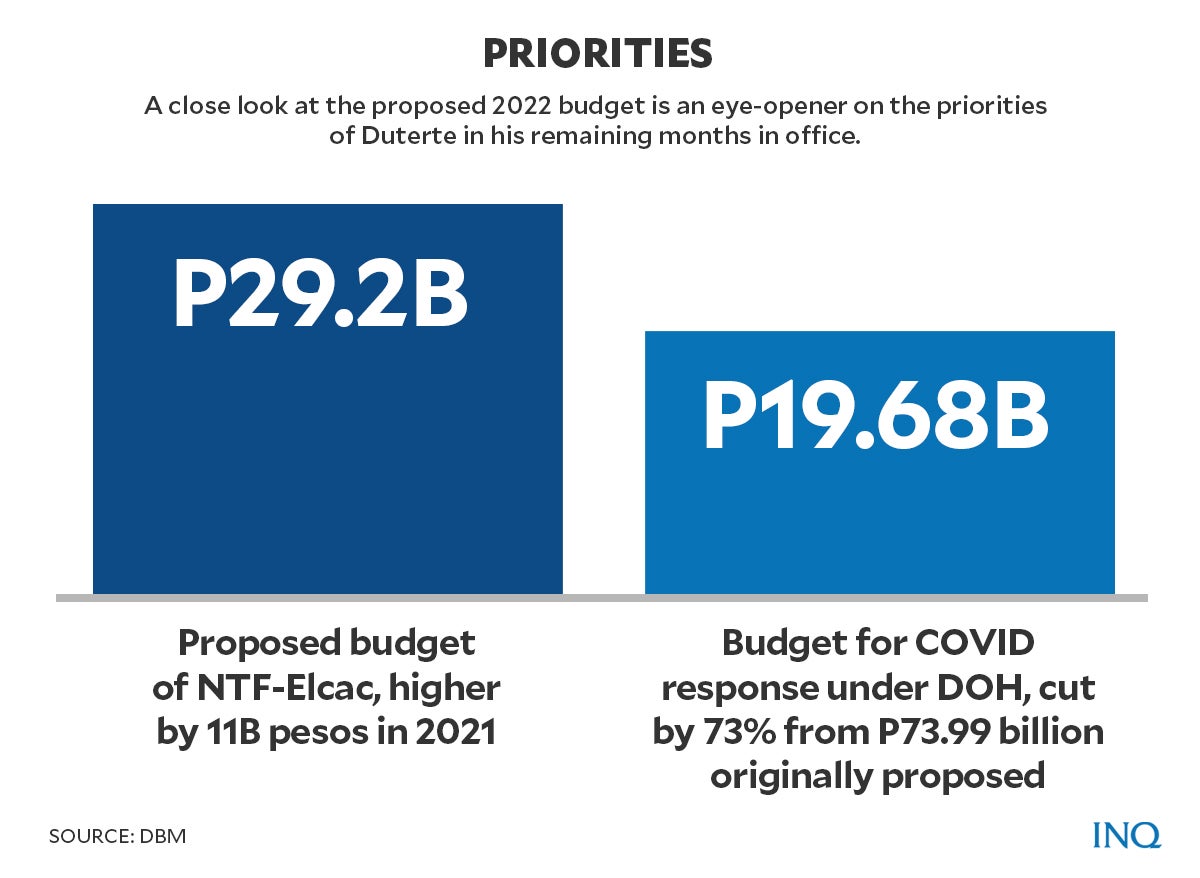 Budget Undersecretary Tina Rose Marie Canda, acting DBM chief, said the budget hike for the task force was due to an increase in the number of barangays that NTF-Elcac listed as beneficiaries of grants being given for development projects in villages already cleared of communist rebels.

“The rationale for the increase is that this year, 822 barangays were cleared,” said Canda. “That is the equivalent amount for the 2021 level and for 2022 the number of barangays cleared increased to 1,406,” she said.

Allocation for every cleared barangay is P20 million, Canda said.

The 75 percent increase in the NTF-Elcac budget, however, was questioned by many legislators amid cuts made by the DBM in other allocations considered as more important, particularly that for COVID response.

As the country continues to grapple with the impact of continuing infections by SARS Cov2, the virus that causes COVID-19, the DOH is getting only P19.68 billion for pandemic-related spending in 2022.

The DBM slashed at least 73 percent of the proposed P73.99 billion COVID response budget by DOH. 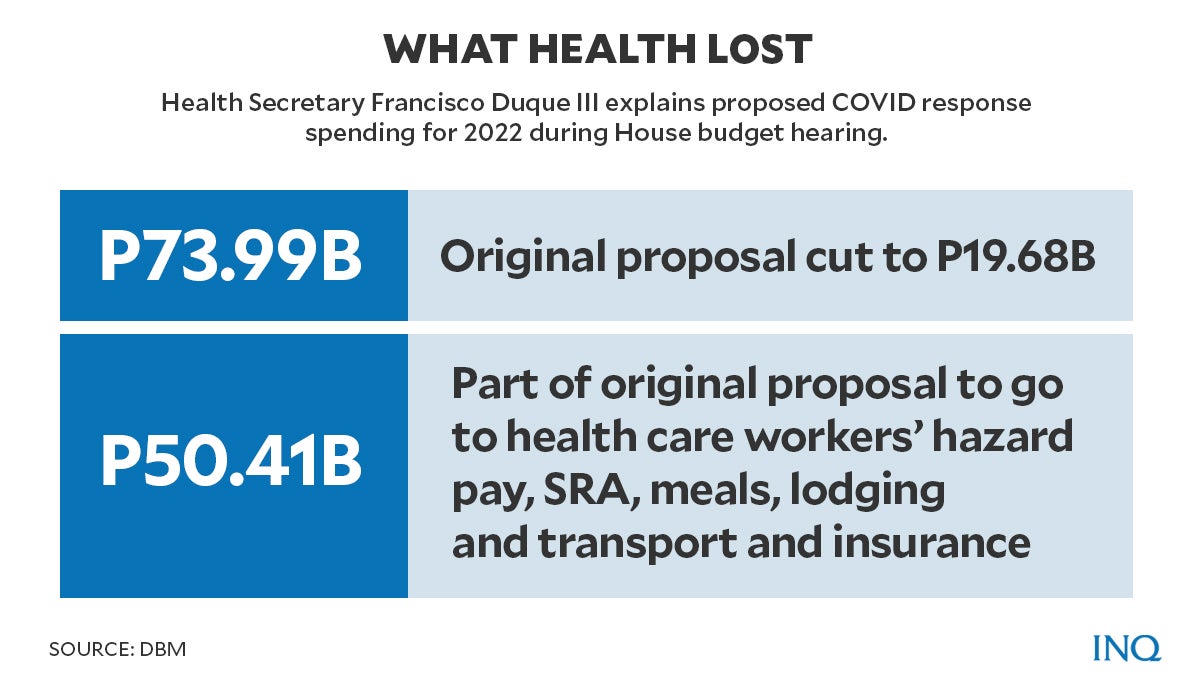 According to Duque’s spending list, these amounts were part of the proposed COVID spending by the DOH:

The proposed budget for the University of the Philippines (UP) also faces a P1.3 billion budget cut for 2022. The state university’s budget includes funding for the UP Philippine General Hospital—a major COVID referral center—and the Philippine Genome Center, the lead in bio-surveillance for genome sequencing of SARS Cov2 variants.

The Research Institute for Tropical Medicine (RITM), the country’s primary coronavirus testing center, also suffered a budget cut after the DBM approved only P223 million for it in 2022. In 2021,  the RITM received an allocation of P393 million.

Unlike NTF-Elcac, other departments also faced a huge decrease in their 2022 proposed budget compared to their 2021 allocations.

The Department of Science and Technology (DOST) proposed a P42-billion budget for 2022 but the DBM gave it only P24 billion, or nearly half.

Science and Technology Secretary Fortunato Dela Peña attributed the decrease in the proposed budget to a reduction in the DOST’s capital outlay spending. He said the department budget focuses on six areas:

Under DOST, the budget proposed by the Philippine Atmospheric Geophysical and Astronomical Services Administration (Pagasa) dropped from P1.8 billion in 2021 to P1.3 billion in 2022.

According to Dela Peña, the budget cut will affect the state weather agency’s modernization program.

The Philippine Institute of Volcanology and Seismology (Phivolcs) got more funding for 2022 with P544.5 million compared to its P529.2 million budget this year.

The Department of Information and Communications Technology (DICT) will also get a lower budget of P10 billion for 2022 from P12 billion in 2021.

The Office of the Vice President (OVP) was also not spared from budget cuts.

During budget deliberations, Vice President Leni Robredo said her office initially proposed P714.56 million for i2022. The DBM, however, approved only P713.41 million—21.50 percent less than the OVP’s P908.79 million budget this year.

Amid the continued increase of COVID cases, lawmakers believe that the P19.68 billion allocated for pandemic response in 2022 is a mirror of the lack of preparation by the Duterte administration against the disease.

The pandemic response budget cut will have a negative impact on health workers’ benefits, according to Duque. The cut was made even as health workers suffer from burnout, are overwhelmed by the pandemic, are underpaid, and are driven to resignation.

Robredo said that there seemed to be “a lot of disconnect” in the government’s declaration of pandemic response as a priority and what is in the 2022 national budget.

She said the proposed 2022 national budget does not appear like it was meant for COVID response.

READ: Robredo: 2022 nat’l budget doesn’t look like it was made for COVID response

Sen. Nancy Binay echoed the same sentiments as she noted the lack of funding for contact tracing, health workers, and financial aid for individuals who lost jobs during lockdowns.

“The 2022 budget is not ready for a war with COVID. There is so much that is lacking,” Binay said at the Kapihan sa Manila Bay forum last Sept. 15.

“COVID-19 is here to stay and is not going away anytime soon. They should have had this in mind when they were crafting the budget,” she added.

Despite getting a bigger share in the budget pie, Local Government Secretary Eduardo Año admitted at a House hearing that the department does not have funds for contact tracers.