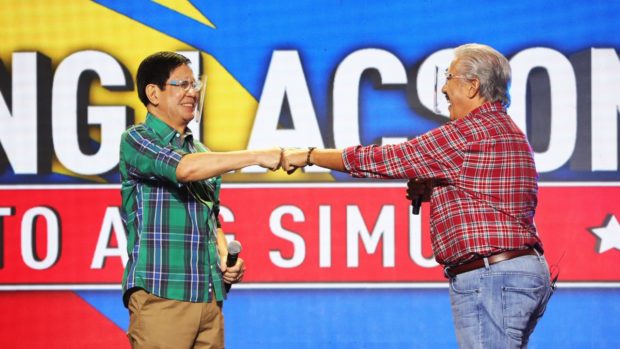 “We’re filing on October 6,” Lacson said in an interview on ABS-CBN News Channel.

Sotto also confirmed to INQUIRER.net the date of their tandem’s COC filing.

“We have the exact time to file because it is Senate President Sotto who decides on this matter because siya yung medyo may paniniwala doon sa mga consultations [he’s the one who believes in consultations],” Lacson added.

“Ako [For me] I always respect pagdating sa mga [such] hunches or whatever basis for timing the launch event and then the filing, si Tito Sen na yun, [That was the decision of Tito Sen]” he added.

Lacson and Sotto officially launched their 2022 bid last September 8, presenting themselves as a viable option to ensure that the country would arise from difficulties brought by the COVID-19 pandemic.

Aside from Lacson, Senator Manny Pacquiao and Manila Mayor Isko Moreno have declared their presidential bid for next year’s elections.