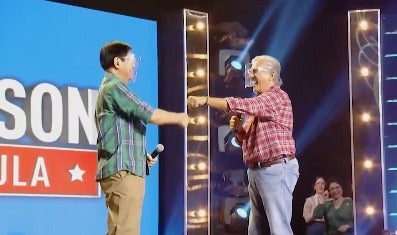 MANILA, Philippines — A “stronger” response to the COVID-19 pandemic will be the top priority of Senator Panfilo Lacson and Senate President Vicente Sotto III should they win as president and vice president, respectively, in the 2022 elections.

(We need a leader who will fight for what is right and will fight what is wrong. Hence, the first of our priorities is a stronger response to the pandemic. We have to fill the gaps and correct the wrongdoing.)

Lacson will be gunning for the presidency with Sotto as his vice presidential candidate running mate in next year’s elections.

“We have to prepare for sustainable recovery from this health crisis,” Lacson went on.

“I have no doubt that with a united citizenry, we will soon see the day that COVID-19 will no longer be a scare,” he added.

Further, the senator stressed the need for “strict discipline” in the management of public coffers.

(There will no longer be swindlers and exploiters, whether close friends or strangers. There should be only one standard for everyone to follow and enforce.)

(There are no sacred cows among those who will profit from the government.)

According to Lacson, he and Sotto are now in the process of drawing up a “roadmap” or a “master plan” that will serve as their platform of government which they intend to present to the Filipino public.

(After all, at the proper time, it is you who will decide if we are worthy of your trust in leading our nation.)

Sotto, for his part, acknowledged the different problems facing the country today, including the rising number of COVID-19 cases.

(We promise that we will not stop this fight until the order of our country is restored. That’s a promise. And when we make a promise, we will never break it.)

Lacson and Sotto are the first to announce their 2022 election bids.

They have yet to reveal their official senatorial slate but Lacson earlier said they are eyeing up to two “newcomers in politics” as “surprise” candidates for the Senate.