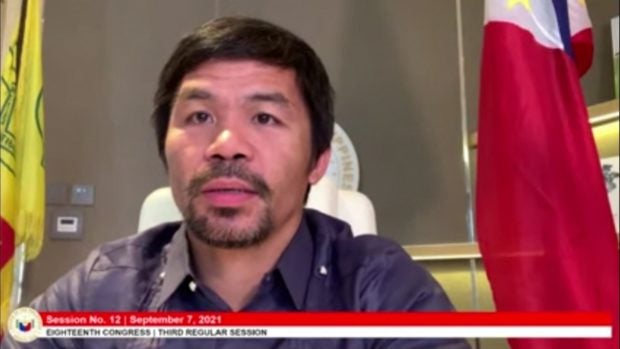 MANILA, Philippines — The PDP-Laban faction led by Senator Manny Pacquiao is set to hold a national convention on September 19 where members are expected to elect new officers, the lawmaker said Wednesday.

Pacquiao made the announcement on the same day that the PDP-Laban wing led by Energy Secretary Alfonso Cusi is set to hold his wing’s own national convention program, wherein they are also expected to vote on their faction’s official slate for the 2022 national polls.

(What I know is we will also hold a convention this September 19. Wait for it. We will elect a new set of officers of the party.)

The ruling party has split into two factions amid the two groups’ differing candidates in the 2022 polls.

The Cusi-led wing has endorsed the tandem of Senator Bong Go and President Rodrigo Duterte as standard-bearers for the coming elections. Meanwhile, the other faction led by Pacquiao and Senator Aquilino “Koko” Pimentel III eyes Pacquiao as a presidential candidate.

Pacquiao, however, has yet to confirm whether or not he will run for president in 2022, although he had already outlined a 22-point agenda in some media interviews. He claimed he would make the announcement soon.

(Right now, my mind is focused on work instead of politics. I will give a direct answer when the time comes. That will come soon. Let us wait before October 1 and then we will talk about politics.)

October 1 is the start of filing of candidacy for next year’s elections.