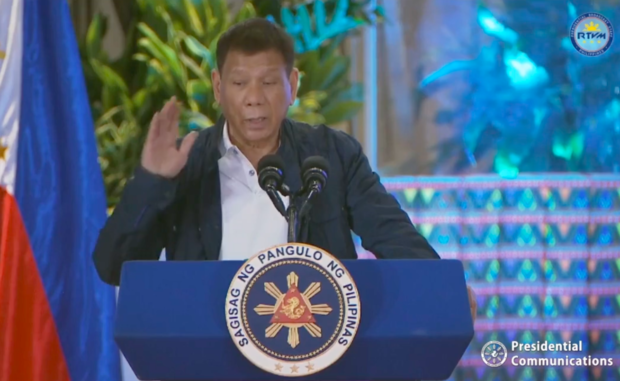 President Rodrigo Duterte: “I would like to continue serving my countrymates and leading the nation to greater progress.” The PDP-Laban Cusi wing held the party’s national convention and proclamation of national and local candidates for the 2022 elections on Wednesday in San Fernando City, Pampanga. Screengrab/RTVM

CITY OF SAN FERNANDO—President Rodrigo Duterte has announced he would run as vice president under the banner of the administration party Partido Demokratiko Pilipino–Lakas ng Bayan (PDP-Laban).

He announced his decision to run on Wednesday, Sept. 8, in this Pampanga capital during the party’s national convention and proclamation of national and local candidates for the 2022 elections.

“I thank the party for nominating me as vice president. I would like to continue serving my countrymates and leading the nation to greater progress,” he said.

He said felt like crying but joked that he was teary-eyed because of using eye lubricant.

“Why am I running as vice president. Out of ambition? Maybe. Love of country? Yes. I’d like to see a continuity of my efforts like against terrorism. Gusto ko nandiyan lang ako. Somebody just have to tell them, to nudge them. The sense of fulfillment, tapos na ako,” he explained.

Without calling Sen. Bong Go as his running mate, he described him as bright and coming from the wealthy Tesoro family in Zamboanga.

For his part, Senator Go reiterated his refusal to run for president, urging PDP-Laban to select a candidate who sincerely desires to run and can follow in the footsteps of Duterte.

(I reiterate: I am not interested in running for president in the upcoming polls. My heart and mind are focused on serving the people, and I don’t desire to compete for the country’s highest post.)

(Choose those who want it.)

Having declined the endorsement of the PDP-Laban, he hoped that the party would continue to respect his decision. With a report from Daphne Galvez

Duterte vows to ‘continue crusade’ to run for VP in 2022