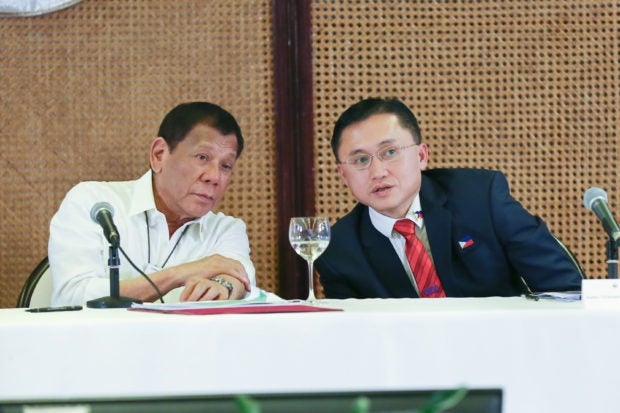 In honor of their earlier pronouncements, the PDP-Laban Cusi faction proclaims the Go-Duterte team for the 2022  presidential election.

MANILA, Philippines — The faction of PDP-Laban led by Energy Secretary Alfonso Cusi has nominated and proclaimed Senator Bong Go as its presidential candidate with President Rodrigo Duterte as his running mate in the 2022 elections.

In the party’s national convention held in Pampanga on Wednesday afternoon, PDP-Laban members voted to nominate the tandem as its standard-bearers in the upcoming polls.

ADVERTISEMENT
Earlier, the political group endorsed the Go-Duterte tandem for 2022 national elections in a resolution passed by the national executive council and officers during an online meeting last August.

In a speech during the event, President Duterte thanked the party for nominating him as its vice presidential candidate in the 2022 polls.

For his motivation to run for the second-highest position in the Philippines, he cited the country he loves and his desire to continue fights against illegal drugs and insurgency, which have been major issues in the country since independence.

“I am hopeful that this will allow me to continue serving the Filipino people and lead the entire nation towards greater progress,” he said.

“Alam mo kung bakit ako tatakbo ng vice presidency? Is it ambition? Maybe. But is it really a sense of love of country? Yes. Is it really because I want to see the continuity of my efforts even though I may not be the one giving the direction. Baka makatulong lang ako,” the President added.

(You know why I want to run for the vice presidency? Is it ambition? Maybe. But is it really a sense of love of country? Yes. It is really because I want to see the continuity of my efforts even though I may not be the one giving the direction. I can maybe help.)

For his part, Senator Go reiterated that he is not interested in running for president, urging the PDP-Laban to pick another candidate who truly wishes to run and is capable of following in the footsteps of Duterte.

(I reiterate: I am not interested in running for president in the upcoming polls. My heart and mind are focused on serving the people, and I don’t desire to compete for the highest post of the country.)

(Choose those who want it.)

He noted that he had declined the endorsement of the PDP-Laban, hoping that the party “will continue to respect my decision.”

In a press conference after the event, PDP-Laban Secretary General Melbin Matibag said they would give Go “enough time” to decide on his political plans for 2022.

For his part, the DP-Laban executive vice president, Cabinet Secretary Karlo Nograles, said “anything can happen” between the present and until the filing of certificates of candidacy from Oct. 1 to 8.

“Baka may change of mind. Decisions might be made, the landscape might change. Marami pang pwedeng mangyari,” he said in the press conference.

(They may be a change of mind. Decisions might be made. The landscape might change. There are lot of things that could happen.)