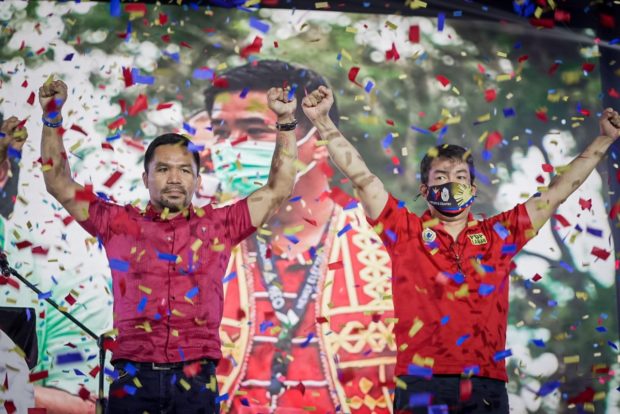 MANILA, Philippines — Manny Pacquiao, who rose to world fame with a phenomenal boxing career before somewhat fading in a lackluster political career, has thrown his hat in the presidential arena as the standard-bearer of a faction of the PDP-Laban, the ruling party now divided by his political tussles with President Rodrigo Duterte.

The 42-year-old boxer-turned-lawmaker said “yes, I accept” to his nomination on Sunday during a “national assembly” of his faction of the party that he and Sen. Aquilino Pimentel III, this faction’s chair, had called.

Elected House representative in 2010 and rising up the legislature in just six years when he was elected senator in 2016, Pacquiao now endeavors to make another bold leap, this time to the country’s highest post by 2022.

“I am a fighter and I will always be a fighter inside and outside the ring. In my life, I have never backed down because… I need to stand up and fight,” he said in his acceptance speech to cheers during the assembly in Quezon City that was also held as a video conference.

Using classic underdog rhetoric, Pacquiao said: “It’s time for the downtrodden to win. It’s time for our nation to rise up from poverty. It’s time for us to have a clean government where every centavo will go to every Filipino.”

“We are fed up with promises of change. Our people ask when their hardship will end. The time is now. We are ready to rise to the challenge of leadership,” he said.

Pacquiao was the second politician to declare his presidential bid after Sen. Panfilo Lacson more than a week ago.

The national assembly of his faction authorized him to choose his running mate.

Last month, Duterte’s faction of the party selected his longtime aide, Sen. Bong Go, as its standard-bearer and President Duterte as his running mate. But Go has so far refused to accept this nomination.

Both factions have petitioned the Commission on Elections to decide their respective claims to be the true party.

Pimentel said his group was ready to slug it out with the faction aligned with Duterte and led by his energy secretary, Alfonso Cusi.

“We will fight back against the hijackers. Ignoring them but resisting them, we will fight,” said the inheritor of the party that once fought the Marcos dictatorship.

Pimentel, the son of the late senator and PDP founder Aquilino Pimentel Jr., said: “If we compare PDP-Laban to a car, some boarded our car and are now trying to force us out. It seems they liked our car. Or maybe they are car collectors. They have so many cars, which means they are so selfish. We will not allow them to hijack our party.”

“We have only one party. Those on the other side kept jumping parties. If convenient for them, they will join, if no longer convenient, they will destroy,” he said in Filipino.

“Today we will happily elect our officers, under the dynamic, courageous, bold leadership of our party president, Manny Pacquiao,” Pimentel said, eliciting cheers at the assembly. “This is exciting because there’s a good chance we will win.”

“The true PDP-Laban will be running our government” when the elections are over, he added.

Acknowledged as one of the greatest boxers of all time and the only eight-division world champion, Pacquiao has captured the imagination of his countrymen and the world in a spectacular career running for more than two decades.

That record has not always been an advantage in politics. He lost his first congressional bid in South Cotabato province in 2007, but ran again three years later, this time winning two consecutive terms in Sarangani province.

Thereafter Pacquiao joined the senatorial race, making it to the Magic 12 in the 2016 elections.

Yet he kept fighting high-profile matches throughout his political career, resulting in a spotty attendance record.

He was among the top absentees in the House of Representatives, showing up for work only four days for the entirety of 2014.

Pacquiao maintained this attendance record in his early years in the Senate. But he began to register perfect attendance as the chamber shifted to online sessions amid the COVID-19 pandemic.

The Bible-quoting Pacquiao counts as his major legislative accomplishments the passage of the Handbook for Overseas Filipino Workers Act of 2018 and the National Bible Day Act. In the House, he passed seven laws, and in the Senate, he authored 12 measures that became law and coauthored six others.

In 2019, he declared a net worth of P3.17 billion, making him the second wealthiest senator after Sen. Cynthia Villar.

The Pacman has been a turncoat several times — from the Liberal Party to the PDP-Laban within three years of his first term in the House, then moving on to the United Nationalist Alliance in 2016 only to revert to the PDP-Laban after Duterte won as president that year.

He was seen as an early enabler of Duterte’s agenda, even leading the Senate in stripping a colleague, Leila de Lima, of her chairmanship of the committee on justice and human rights.

But with a potential change of the guard in the coming general elections, Pacquiao has become a vocal critic of Duterte and as a result has risked his standing in the ruling party and in the political scene at large.

Compounding his complicated prospects in politics is his defeat in boxing last month in the hands of Cuba’s Yordenis Ugas, which prompted suggestions of retirement from the Pacman himself.