Pacquiao thanks Robredo for trusting him, but still undecided on 2022 plans | Inquirer News

Pacquiao thanks Robredo for trusting him, but still undecided on 2022 plans 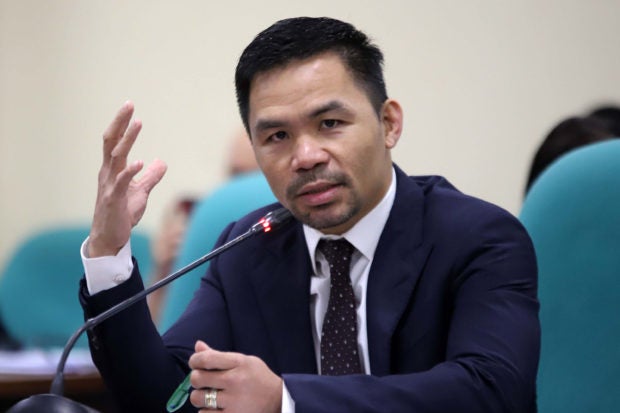 MANILA, Philippines — Sen. Manny Pacquiao thanked Vice President Leni Robredo on Monday for expressing willingness to support him should he run with Manila Mayor Isko Moreno in the 2022 elections — if their tandem was what it would take to end the political dominance of President Rodrigo Duterte.

“I’m thankful to Vice President Leni Robredo for her trust in me,” Pacquiao said in a statement.

Then shifting to Filipino, he added: “But as I already said, I’m still thinking hard about which of my three options I would pick — [run for] the presidency, run for senator, or completely retire from politics,” the senator said

Robredo was expressed her possible support for Pacquiao in an interview with ABS-CBN News Channel’s “Headstart.”  She was asked whether she had already talked with Pacquiao and Moreno — two of the possible presidential candidates in the 2022 elections.

READ: Robredo to back Isko-Pacquiao tandem if it will bring end to current regime

According to Robredo, she had already talked with Pacquiao once and scheduled a meeting with him on his return from the US after his match Cuban Yordenis Ugas.

She has not confirmed, however, whether she had discussed the elections with Moreno, but the two had earlier collaborated in setting up the drive-thru COVID-19 vaccination program in Manila.

READ: Robredo admits talking with Pacquiao, other politicians about 2022 elections

For his part, Pacquiao said he would continue working to fight poverty and corruption — whatever his decision would be. He then made an appeal to Robredo.

“In case that I decide to run, I hope you will support me in my desire for peace and progress in our country,” he said.

“I want to see in prison the thieves in our government who are the reasons why our countrymen are suffering. Again, thank you so much for your trust,” he added.

Pacquiao and Moreno are among those rumored to be making a presidential bid in 2022, along with Robredo herself and Senators Panfilo Lacson and Richard Gordon — all of whom the vice president vowed to talk with.

READ: Gordon bares another meeting with Robredo; says open to alliance with 1Sambayan

Robredo said she was considering running for president as well — if that would be the best option for the opposition.

As of now, she has not given out her decision  However, her spokesperson, Barry Gutierrez, said last Wednesday that Robredo was close to nearing her self-imposed deadline on her decision.

Robredo still open to run for president in 2022