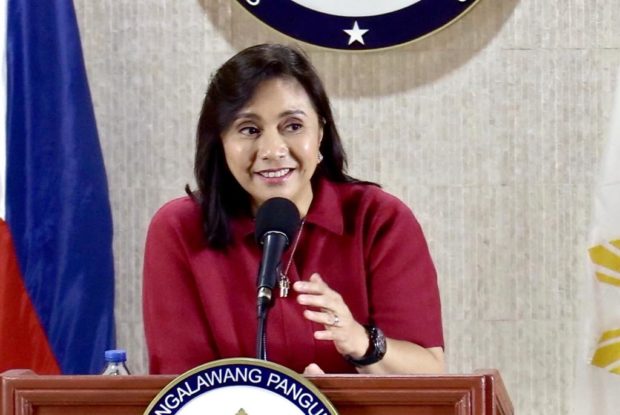 MANILA, Philippines — Talks of Vice President Leni Robredo aiming for the Camarines Sur gubernatorial post was amplified Monday as a local political party assured her of support should she run for the local post in 2022.

In a manifesto posted by former Camarines Sur 1st District Rep. Rolando Andaya in his Facebook account, the Anduyog party said they would support Robredo if she chooses to vie for the gubernatorial spot. Other Camarines Sur politicians posted the same manifesto in their respective social media accounts.

“We, the undersigned, believe that now, more than ever, we need to have a leader who has a genuine concern for our beloved province.  A leader who will put the needs of the province and its people first before oneself.  Someone who will bring our province out of poverty and into economic progress,” Anduyog members said in the manifesto dated March 15.

“We believe that Vice-President Leni Robredo is the governor that Camarines Sur needs right now.  She will be able to lead the province into recovery from the devastating effects of this pandemic,” they added.

Andaya was designated as the group’s point-person who would convey the manifesto to Robredo.

“Should she rise to this challenge, we express our support to her candidacy as the governor of the province of Camarines Sur,” they noted.

In Andaya’s Facebook post on Monday, he also denounced several community pages saying they endorsed Robredo’s candidacy for president — a post the vice president is also rumored to be looking at for 2022 — saying it seems that possible political opponents in the province are afraid of Robredo coming into the fray.

“This kind of tactic is one of the reasons why we need a change in the leadership. This is the reason why we will support Leni,” he said.

The Manifesto signed last May 15, 2021 was to express support for VP Leni Robredo should she pursue her candidacy for…

Robredo stressed during her Sunday radio program that she has not made any decision yet regarding her next political plans even if some of her allies insinuated that she has already decided to run for governor of Camarines Sur in next year’s elections.

She also admitted during the program that a local post looks more appealing to her now although she quickly clarified it is only one of her options.

The Vice President, nevertheless, said her current focus is on helping the country fight the COVID-19 pandemic.

READ: Robredo eyes local post in 2022 polls, but ‘open to all possibilities’

It could be remembered that last week, Liberal Party (LP) ally Senator Antonio Trillanes IV announced his intention to run for president in the 2022 election and urged the 1Sambayan coalition to elevate his status from a backup presidential candidate to a primary nominee as he claimed that Robredo had already fixed her eyes on the gubernatorial post.

Trillanes, however, was rebuffed by Robredo’s spokesperson, Atty. Barry Gutierrez, who urged allies of the Vice President to avoid forcing or pressuring her to make a decision immediately.

Gutierrez also noted that it is “funny” for some opposition members to want a quick answer from Robredo when people like them actually loathe overeager candidates.