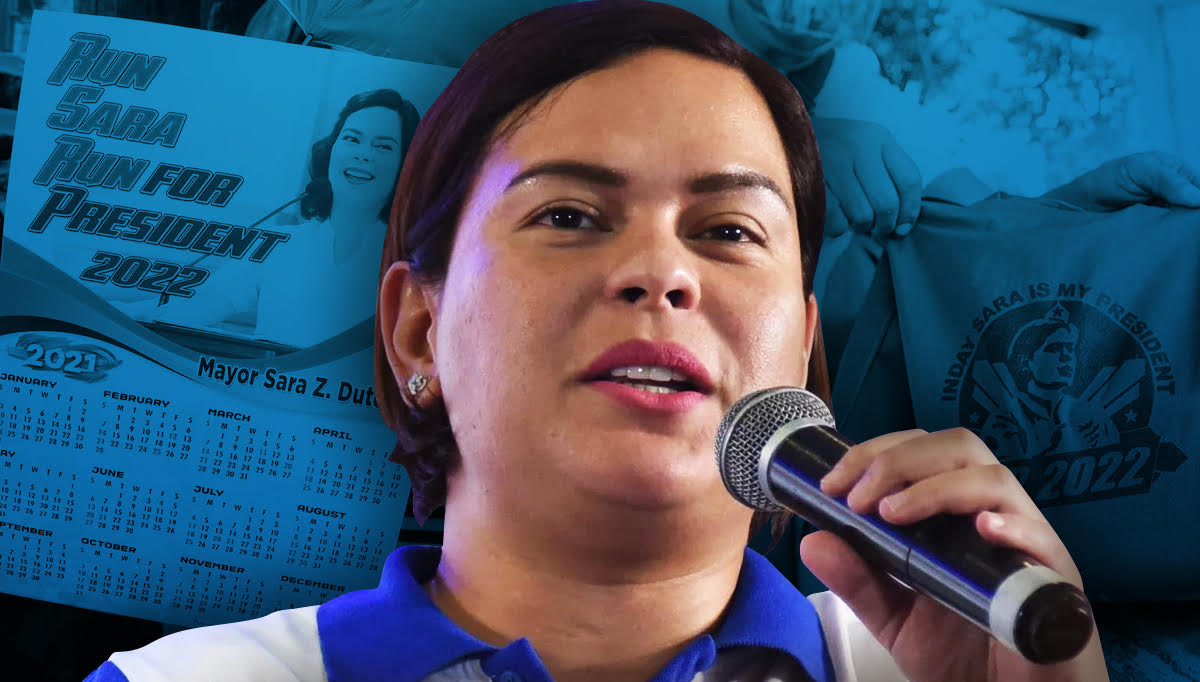 MANILA, Philippines—A now viral video of several men seemingly proud of what they’re doing—loading onto a plane what one of them said were campaign materials for Sara Duterte—has raised more questions than answers especially after the President’s daughter disowned the activity.

As Sara said she was open to the idea of running for president in a bid to replace her father, it apparently drove those hoping she would join the race to escalate efforts to prop President Rodrigo Duterte’s second eldest child.

Even as Sara, currently mayor of the Duterte hometown Davao City, has yet to make her decision final, several groups and individuals are already busy preparing for her plunge into the presidential race. 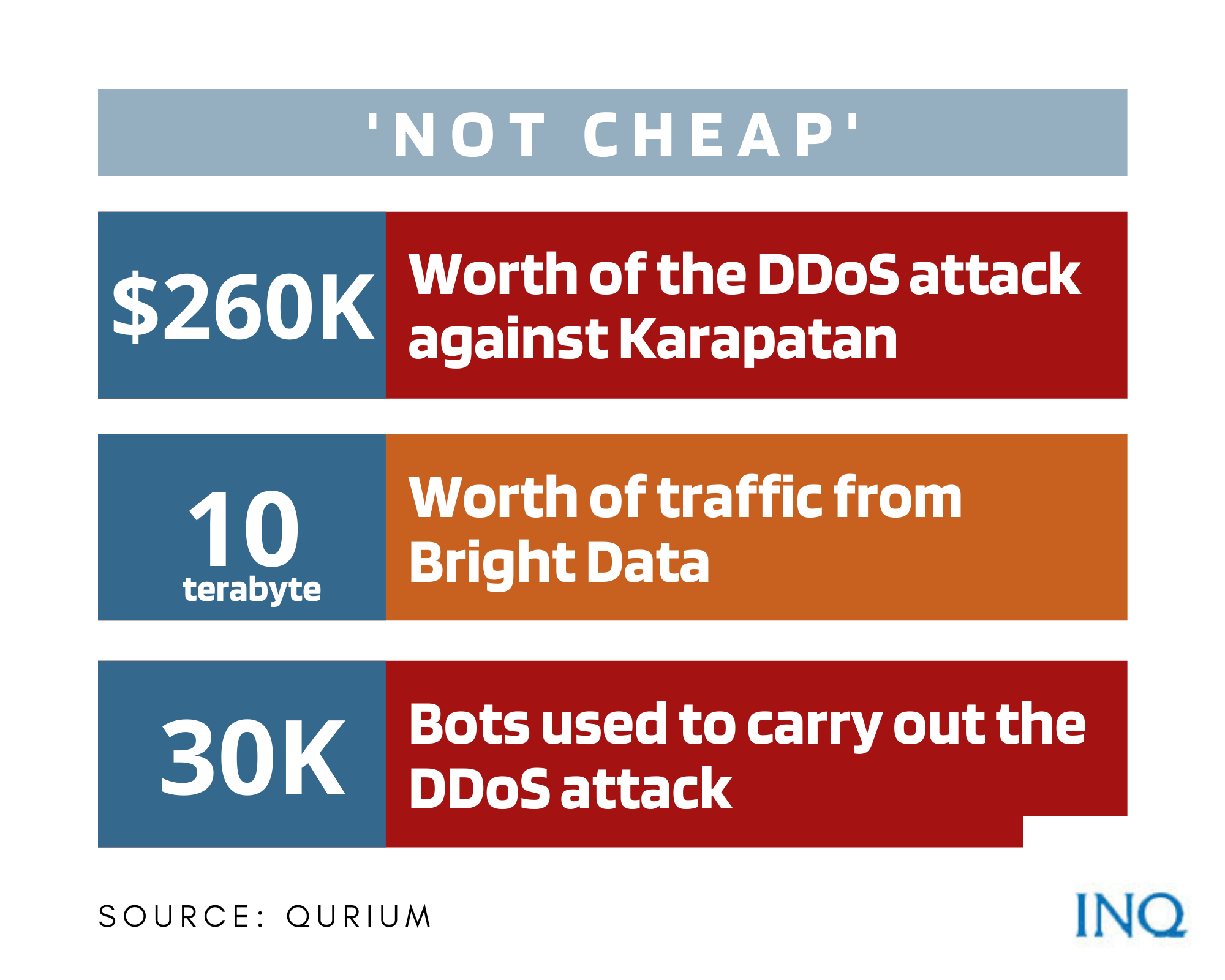 The video showed the three—a certain Gino who was referred to as manager of PSI Air 2007 Inc in Mindanao, Angeles City Councilor Joseph Ponce who is secretary general of the Ituloy ang Pagbabago Movement (IPM) and Rene Gabriel, IPM political affairs head—having fun as they loaded what was described in the video as campaign materials for Sara.

Here’s the dialogue recorded in the now viral video: 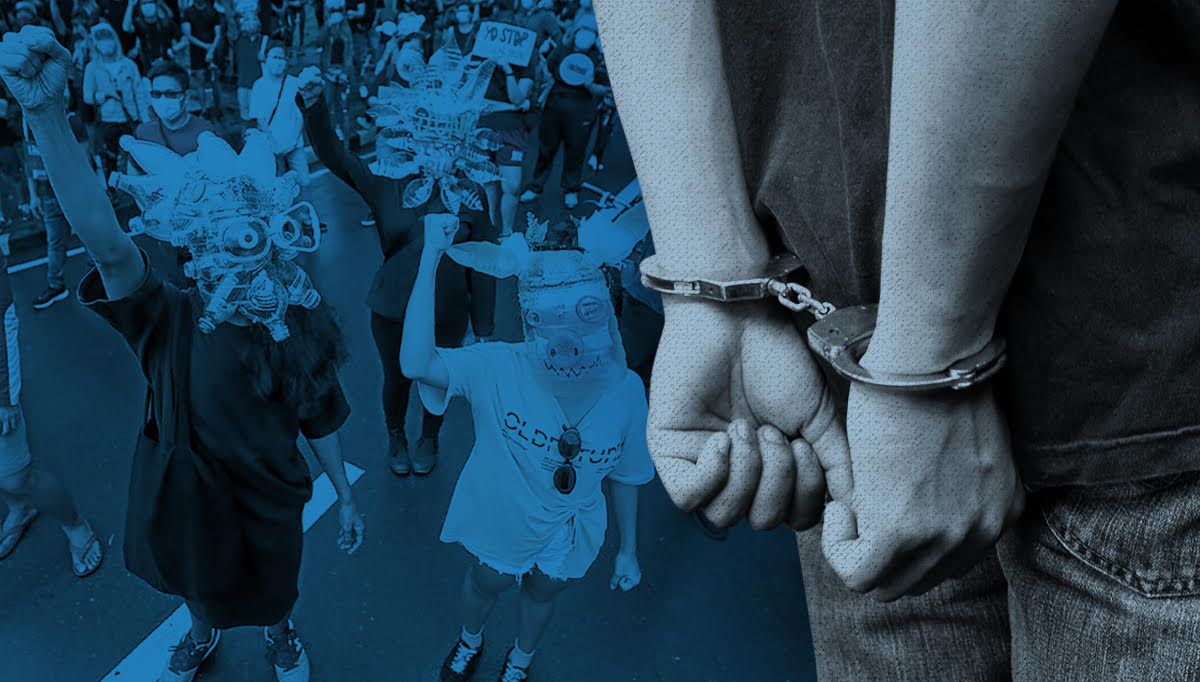 Sara has since denied that she had talks about the use of a cargo plane to transport campaign materials for her, saying that she never told anyone that she will run for president and that she does not know the men who took a video of themselves at the Davao International Airport.

READ: Inday Sara refutes viral video: ‘I have never told anyone that I am running for President’

In an interview with INQUIRER.net, Ponce stressed that he did not state that they had talks with the Davao City mayor.

The video showed boxes being loaded to the cargo plane. Ponce said that the cargo airline will provide “transportation services” for free. However, he explained that the boxes did not contain campaign materials and that those were not from IPM. 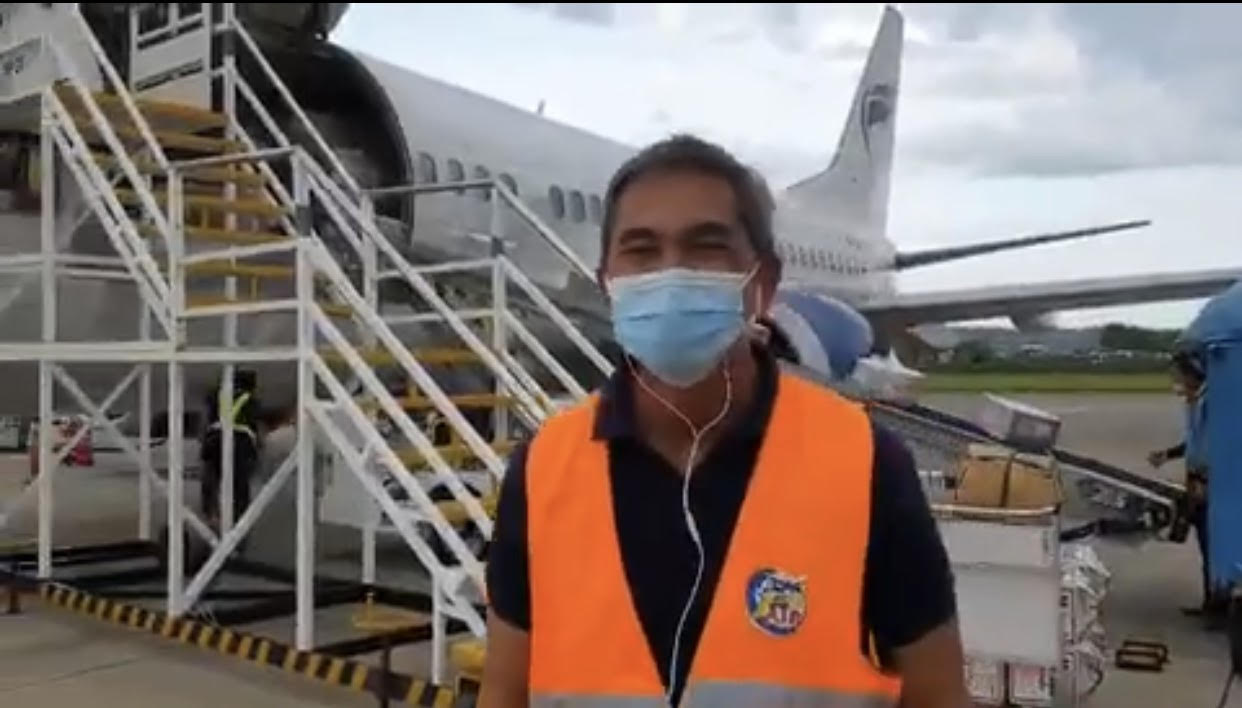 A certain Gino who was referred to as the manager of PSI Air 2007, Inc. in Mindanao wears a vest with the logo of the airline cargo company. SCREENGRAB FROM PONCE’S VIDEO

Sara stressed that she is not part of IPM and is not privy to the group’s activities. She warned those who are pushing her to run for president against using her name “in their personal transactions” because she does not tolerate such practices.

“I do not tolerate these activities and I do not hesitate to pursue legal action against those who besmirched my reputation even if they are supporters,” she said.

Last July 9, Sara said she is willing to run for president in 2022, saying that “what is important now is that we know the sentiments of the people and what they really want.”

Two weeks later, the Hugpong ng Pagbabago (HNP), the regional political party that was formed by Sara, launched the IPM “grand caravan” to back the Davao mayor’s possible presidential bid in 2022. 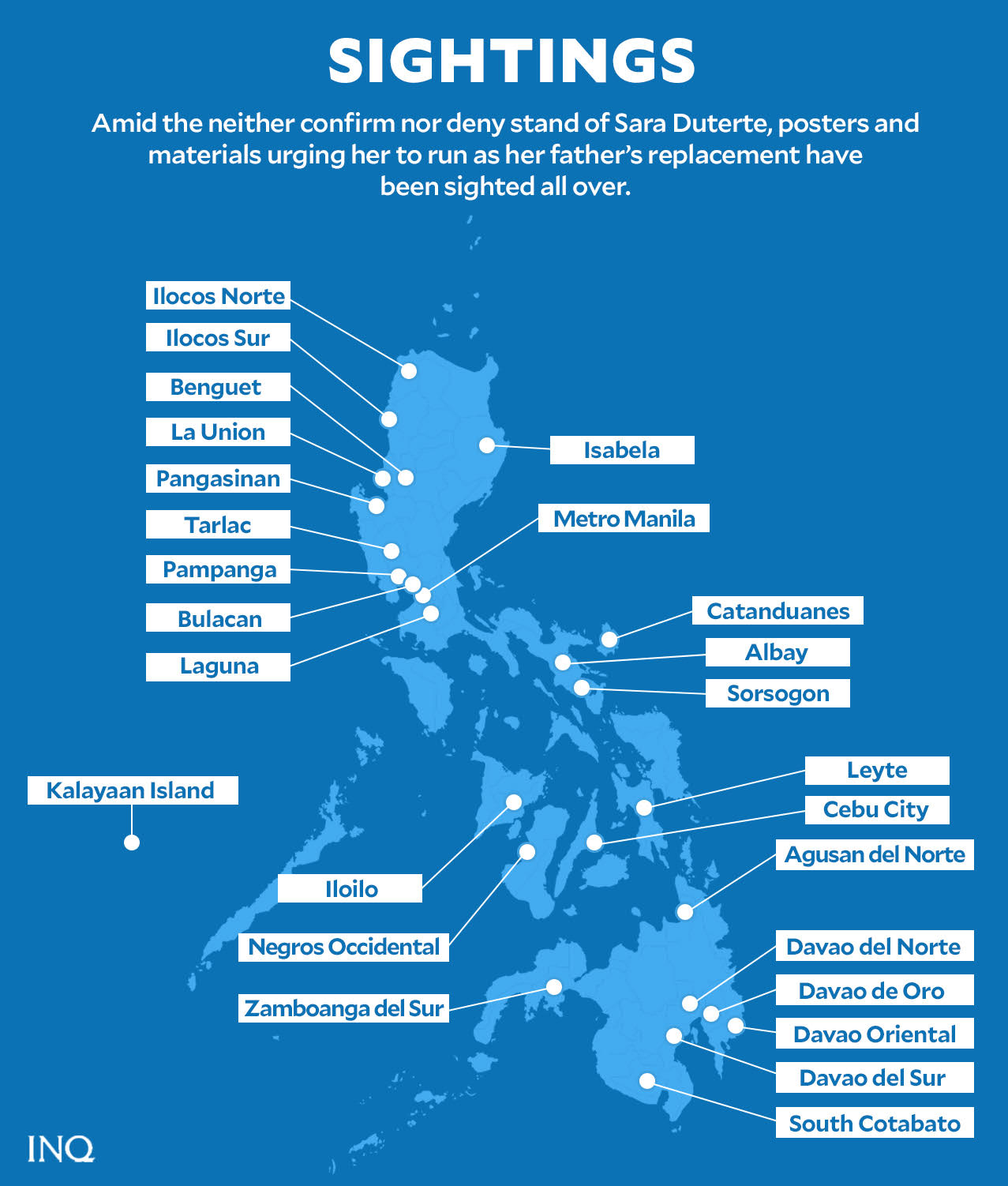 Results of a Pulse Asia’s survey, said Sara was “most preferred” presidential candidate with 28 percent of 2,400 respondents saying they would vote for her if elections were held on the day of the survey.

Present at the launch of IPM was IPM National Chairperson and Davao Occidental Gov. Claude Bautista who is also the president of HNP and the father of Dumper–PTDA Rep. Claudine Bautista, the partylist group mentioned in the viral video.

The Philippine News Agency (PNA) described a photo from the IPM caravan as “the successful launching of IPM organized by the pillars of HNP” and that it brought political leaders and political groups together to endorse Sara for president.

The PNA report said that Sara, after learning of the result of the caravan, expressed gratitude to all individuals who have given her trust and confidence.

The video mentioned several individuals and groups being credited for the supposed operation to transport campaign materials for Sara. Those mentioned were, however, not ordinary Filipinos just expressing support for their preferred presidential candidate.

Ponce is a lawmaker in Angeles City, an ally of the President in Central Luzon, who was expected to be the third nominee of Dumper–PTDA, a partylist group endorsed by Sara in 2019. Ponce and Dumper were mentioned in the controversial video.

In 2020, the group’s representative, Claudine Diana Bautista, was one of 70 congressmen who killed the franchise of ABS–CBN, the Philippines’ broadcast giant that found itself at the receiving end of the President’s expletives.

Bautista was one of the authors of a July 2020 resolution which called for an investigation of the Development Bank of the Philippines’s supposed condonation of a P1.6 billion loan to companies belonging to the Lopez family which owns ABS–CBN.

In the video, Ponce also mentioned Bong Acquia who, he said, was with him in the meeting. Acquia is a businessman and the former chairperson of the Presidential Anti-Smuggling Group in Southern Mindanao who ran for Sarangani governor and lost under the ruling Partido Demokratiko Pilipino–Lakas ng Bayan (PDP–Laban).

He is presently serving as the operations head of the IPM.

In 2011, Acquia was referred to by 1st Lt. Rio Anthony Gammad of the Charlie Company of the 73rd Infantry Battalion as one of the alleged financiers of an illegal small-scale mining activity in Sarangani.

In an interview with INQUIRER.net, Acquia dismissed the allegation as “baseless and pure hearsay,” saying that he himself will not permit illegal activities in Sarangani.

PSI Air 2007, Inc. was contracted by the Office of the Civil Defense (OCD) in 2020 as an air cargo service for its COVID-19 response through a P25 million deal.

The contract was signed by OCD and officials from PSI Air 2007. Inc., including its chief executive officer Amirhossein Moghaddasi who, Ponce said, is his “friend”.

Since last year, despite the absence of confirmation from Sara herself, several groups posted streamers in many areas asking her to run.

A quick search on Facebook and Google showed that “Run, Sara, Run” posters reached 26 areas in the Philippines – from Metro Manila to the Kalayaan Island Group in the West Philippine Sea.

Recently, a billboard convincing Sara to seek the presidency was ordered removed by the local government of Sorsogon City for “non-compliance with the requisite permit.”

READ: ‘Run Sara Run’ tarps to be taken down in Davao, Cebu

Run, Sara, Run streamers were likewise removed in Cebu City for being “illegal.” In several parts of the Philippines, like Laguna, posters of Sara were vandalized.