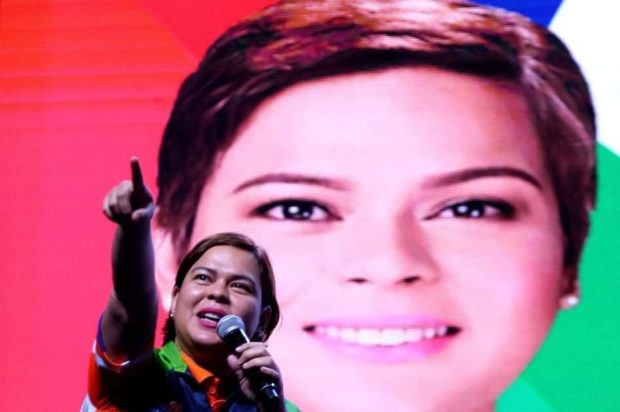 Del Rosario is a known ally and years-long confidant of the mayor, now the presidential frontrunner in every major poll.

“We, her officers and members of the HNP, will support whatever she decides. If she decides to run for president or remain as Mmayor, we will support her. The final decision is hers,” Del Rosario told Inquirer.net, speaking partly in Filipino.

HNP is a regional political party established in 2019 with the presidential daughter as the chairperson.

In an earlier statement, the younger Duterte said she was aware of the momentum of the insistence of several groups — the HNP included — for her to run for the presidency, adding that she was  “listening” but reminded her friends and supporters that there are more pressing issues at the moment.

Del Rosario said that while they respected the statement of their chairperson, they were hoping that by October, “things will be clearer” on what her decision would be.

“Mayor Sara is a strong and determined leader. She listens. And she’s known for always doing the right thing,” Del Rosario added.

The HNP Secretary-General also said that a possible Sara Duterte in the Presidency by 2022 means continuity.

“It’s clear that in the last five years, President Rodrigo Duterte has done a lot for the Philippines. He has done many good things for the people,” Del Rosario said.

The Davao City mayor is frequently in touch with HNP officers, but the 2022 elections is not on the agenda.

“We text regularly. Last week we had a face-to-face meeting in Davao City. As we know, we have this pandemic now. So it’s on Zoom. Unlike when there was no pandemic, sometimes we go for lunch to discuss pressing problems and how we can help,” Del Rosario said.