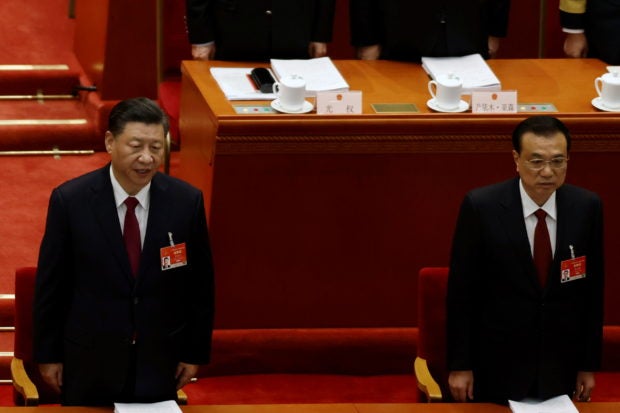 Chinese President Xi Jinping and Premier Li Keqiang sing the national anthem at the opening session of the National People’s Congress (NPC) at the Great Hall of the People in Beijing, China March 5, 2021. REUTERS/Carlos Garcia Rawlins

BEIJING — Chinese Premier Li Keqiang pledged on Friday to promote business ties with the United States based on “mutual respect” that benefit both countries.

The world’s two largest economies have been at odds over trade and economic policy, especially when it comes to U.S. efforts to restrict tech exports to China and tariffs both have put on each others goods.

This week, President Joe Biden singled out a “growing rivalry with China” as a key challenge facing the United States, with his top diplomat describing the Asian country as “the biggest geopolitical test” of this century.

In his annual work report at the opening of the annual meeting of China’s parliament, Li said his country wanted to work with the United States.

“We will promote the growth of mutually beneficial China-U.S. business relations on the basis of equality and mutual respect,” he said, without giving details.

The United States has also repeatedly complained about market access problems in China for its companies.

Biden’s U.S. trade representative nominee, Katherine Tai, said on Monday she would work to fight a range of “unfair” Chinese trade and economic practices and would seek to treat Chinese censorship as a trade barrier.