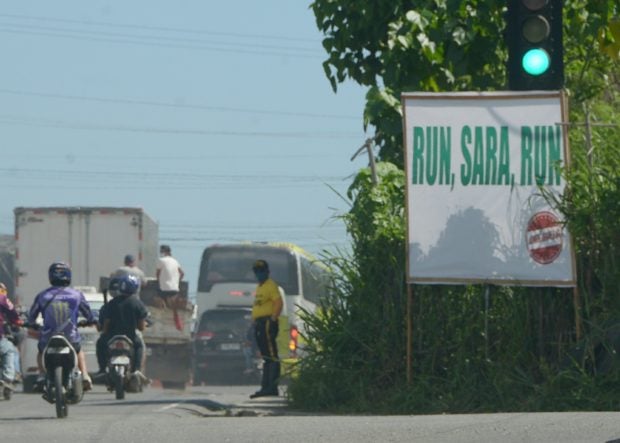 CAN’T MISS IT Motorists passing through this busy road in Davao City will not miss a streamer urging Mayor Sara Duterte to run for president in 2022. The mayor has ordered the dismantling of similar posters put up in the city without the required permits. —BING GONZALES

DAVAO CITY, Davao del Sur, Philippines — Mayor Sara Duterte said she would order the removal of tarpaulin streamers and posters urging her to run for president in next year’s elections, saying those behind the display of these materials did not apply for permits and violated a city ordinance.

Duterte, speaking over Davao City Disaster Radio, said City Ordinance No. 092 set corresponding fees for setting up billboards and similar advertising materials and prohibit the putting up of materials in places that would obstruct the view of Mt. Apo and the Island Garden City of Samal.

A campaign to draft the daughter of President Duterte as presidential candidate, mainly through the “Run, Sara, Run” movement, has been started by different groups. Tarpaulins bearing the same message have sprouted in Metro Manila and in other areas around the country. Organizers have also tapped social media.

Duterte thanked those behind the campaign for trusting her leadership, but she maintained that she was sticking with her announcement in January that she would not seek the presidency.

“Right now, there is no chance for me to change my mind,” she said.

Duterte said those urging her to run for higher office might have missed her message because she did not reveal the reason for her decision. She said she would just keep silent because “I might offend [some people] or hurt them.”

Duterte also told Davao village officials to refrain from organizing activities geared at pressuring her to run for president.

In Surigao del Sur province, the President brushed aside calls to have his daughter run for president in 2022.

At a briefing in Tandag City on Tuesday on the damage wrought by Tropical Storm “Auring” (international name: Dujuan) in Caraga region, Gov. Alexander Pimentel told the President that he was “very, very worried because your term will be ending” and that the efforts to quell the communist insurgency might not be sustained.

“What we request is continuity. And one from the current administration must continue what you have done,” Pimentel said, addressing Mr. Duterte.

“That is why we need to convince Inday Sara or Sen. Bong Go,” Pimentel said, drawing applause from the crowd. In jest, the President responded: “Iyan lang pala eh (Oh, so that’s just it).”

But Mr. Duterte followed up his remark with a pronouncement: “Inday Sara is not running. I have really, really put my foot down.”

In Cebu City, officials have ordered the removal of “Run Sara Run” tarpaulins.

Florante Catalan, chief of the city building office, said he had not received any application to put these up on walkways in the city. “No applications whatsoever for those tarpaulins,” he said in a text message.

Catalan ordered the removal of the streamers from a group calling itself “Friends of Sara Cebu.”

Mayor Edgardo Labella, an ally of President Duterte, said the streamers should be taken down since these did not have permits from the city government.

—With a report from Nestle Semilla