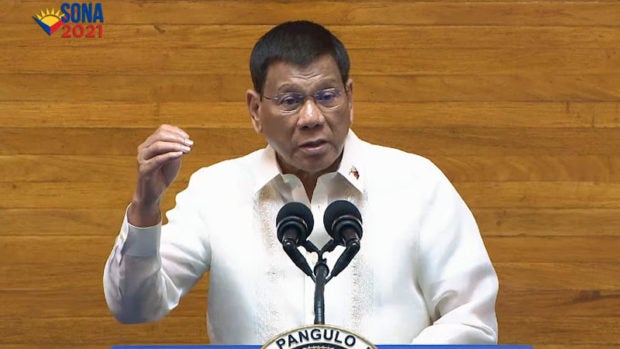 President Rodrigo Duterte delivered his final State of the Nation Address on Monday, July 26, 2021. (Screenshot from an RTVM YouTube livestream)

MANILA, Philippines — President Rodrigo Duterte delivered on Monday his final State of the Nation Address (Sona), the longest one in the post-EDSA Revolution era.

The presidential chopper landed at the Batasang Pambasa complex in Quezon City just before the  4 p.m. schedule for the event.

Duterte went on and off-script as he delivered his final address — taking about two hours and 45 minutes, beating the 2015 SONA of the late President Benigno “Noynoy” Aquino III, which lasted two hours and 13 minutes.

Duterte touted his administration’s achievements, especially in the war against illegal drugs and the implementation of infrastructure projects. He also mentioned the passage of some bills that he had endorsed, touched on his so-called independent foreign policy, and the COVID-19 pandemic, which marred his last years in office.

Here are some of the important points mentioned that Duterte made.

Duterte said the Philippine economy was emerging as “one of the fastest-growing economies in Asia” until the pandemic happened.

Saying nobody knew when COVID-19 would go away, the president urged Filipinos to say a prayer as the country continued to grapple with the health crisis.

READ: Duterte: We can only pray to God amid the COVID-19 pandemic

The President also expressed alarm over the COVID-19 Delta variant, prompting him to again issue a warning of a possible lockdown should it become more widespread.

On vaccination, Duterte called out a local government unit, which he did not name, for allowing people to lineup even during a flood for their COVID-19 vaccination.

The president also gave a special mention of medical and economic frontliners, the private sector, LGUs and the international community for their sacrifices and help his administration in its fight against the COVID-19 pandemic.

With his term ending, Duterte said he had fewer visions and more remembrances to offer the people.

He said his administration’s campaign against illegal drugs “led to the surrender of millions of drug dependents and neutralization, capture, and prosecution of thousands of drug personalities.”

READ: Duterte: We made strides in addressing root causes of communist insurgency

“With the creation of NTF-Elcac, we have made strides in addressing the root causes of this conflict by empowering our kababayans who have been used by this communist pursuit for many decades. In our continuing efforts for safe and conflict-resilient barangays, we have worked towards the sustainable rehabilitation and development of communities where the communist used to operate,” Duterte said.

On transportation, Duterte said the government had already taken away the “misery of public commuting,” thanks to the infrastructure projects completed under his watch.

READ: We have taken away the misery of public commuting — Duterte

Apart from gains, Duterte also admitted some shortcomings like the still incomplete rehabilitation of the war-torn Marawi City.

“Rebuilding a better Marawi remains today still not completed. To Task Force Bangon Marawi, we need to race against time and you have to finish the necessary work to rehabilitate the war-torn city and bring its families back home,” Duterte said.

He urged lawmakers to pass the military and uniformed personnel pension reform bill, as well as the measure providing free legal assistance to law enforcers.

To make the Philippines resilient to future pandemics, Duterte also asked Congress to pass laws establishing the Philippines’ Center for Disease Prevention and Control (CDPC) and a virology institute.

Duterte expressed confidence the Filipino could soon develop its own vaccines, “no matter how poor” the country.

He also raised the amendments of priority legislative measures such as the Foreign Investments Act, the Public Service Act, and the Retail and Trade Liberalization Act.

Duterte touched on some of his controversial issues, one of which is the Philippines’ maritime dispute against China over the West Philippine Sea.

He rehashed what critics call his defeatist stance on the issues, saying there would be “a massacre” if it would go to war against China.

READ: Go to war with China over West PH Sea? It will be a ‘massacre’, says Duterte

In the same breath, Duterte still brought up how he raised before the United Nations the country’s victory against China at the Permanent Court of Arbitration.

Duterte said he had no problem with the network, but he proceeded to claim ABS-CBN had not been paying its taxes — something that’s already been cleared before in congressional hearings.

Veering away from his prepared speech from time to time, Duterte also had several light moments as he delivered his final SONA.

At one point, he admitted being confused with the flow of his own speech, saying the teleprompter operator might already be feeling drowsy.

The president, who has a penchant for cursing, said he would be a “good boy” and not curse during the SONA since “religious” people were watching him — but to no avail.

Duterte just dropped the volume of his voice to a whisper whenever he cursed.

READ: In last Sona, Duterte tries not to say bad words; spews out at least 4

Duterte even joked about getting COVID-19 and looked for an ambulance in the middle of his speech.

“I can’t pronounce this well. Maybe I already have it. Do we have an ambulance here?”  he said in Filipino.

Towards the end, Duterte went as far as joking about dying because he was having a hard time breathing.

“I’m short of breath. I might die here as president. My heart is beating differently,” he said.