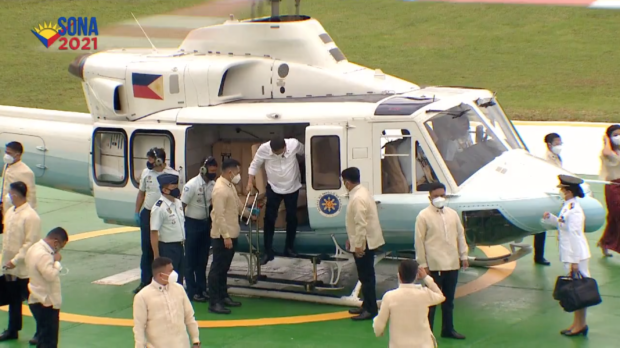 MANILA, Philippines — President Rodrigo Duterte arrived at the Batasang Pambansa in Quezon City on Monday afternoon to deliver his final State of the Nation Address (Sona).

The presidential chopper carrying the President touched down at the Batasang Pambansa before 4 p.m.

Malacañang said Duterte is expected to discuss Philippines’ improvements under his watch the past five years, focusing on peace and security, infrastructure and foreign policies.

Communications Secretary Martin Andanar said the President’s final Sona will focus on his administration’s “heirloom legacies” and will surely be “memorable and significant to the Filipino people.”

The President’s final Sona will be helmed by Radio Television Malacañang (RTVM) director Danny Abad, who had directed the Sonas of past presidents.

Singer Morissette Amon will sing the national anthem, while some of Duterte’s favorite songs rendered by the Philippine Philharmonic Orchestra will be played during the President’s final Sona.