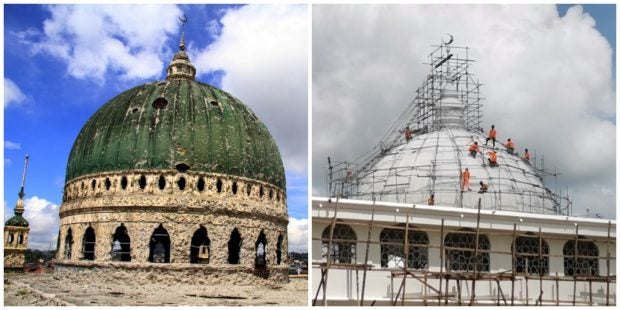 FILE –  The Grand Mosque, an icon of Islamic faith in Marawi City, underwent major reconstruction after it was heavily damaged during combat operations to flush out militants who laid siege to the city. —FILE PHOTOS BY RICHEL V. UMEL AND DIVINA M. SUSON

MANILA, Philippines — President Rodrigo Duterte admitted Monday that the rehabilitation of the war-torn Marawi City is still “not completed.”

Duterte made the remark in his final State of the Nation Address (Sona) in Batasan Pambansa in Quezon City as he called on the Task Force: Bangon Marawi to fast track the rehabilitation of the city.

“Rebuilding a better Marawi remains today still not completed. To Task Force Bangon Marawi, we need to race against time and you have to finish the necessary work to rehabilitate the war-torn city and bring its families back home,” Duterte said.

The Maute group laid siege to the city for five months, starting on May 23, 2017, resulting in widespread damage to property and infrastructure, as well as the loss of lives.

Thousands of local residents were forced to flee and live in temporary shelters provided by the government during the siege.