In last Sona, Duterte tries not to say bad words; spews out at least 4 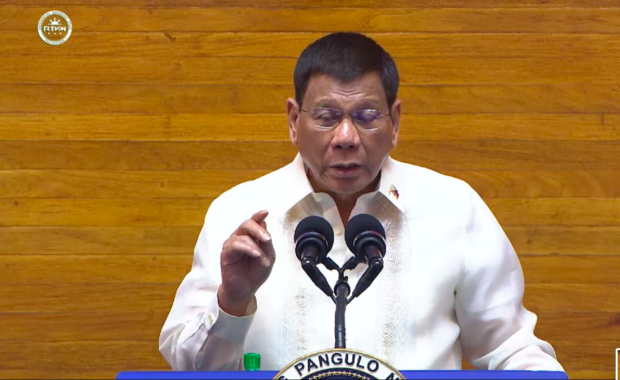 In a rant against communist rebels, President Duterte spat out a barely audible expletive. Screenshot/RTVM

MANILA, Philippines — In his final State of the Nation Address (Sona) on Monday, President Rodrigo Duterte could be observed making an effort not to spew out bad words, as he is known to do in public.

During the course of his speech, which spanned for about two hours and 45 minutes, Duterte could be observed suddenly dropping his voice volume to almost whisper when he was speaking harshly.

In at least four instances, Duterte failed to curb his expletive use.

In a rant against communist rebels, Duterte spat out a barely audible expletive.

When talking about corrupt cops, he also used a foul word.

“There are people charged with corruption and even going to prison for just maybe not telling the truth in their assets and liabilities, nakukulong. Eh p***.. Itong mga pulis who are doing their things, their drugs, there were the distributor of drugs,” he said.

He also let out two expletives when recounting watching TV and watching Filipinos standing in line for vaccination despite the heavy rains.

In his previous Sona speeches, particularly in 2016 and 2018, Duterte avoided using curse words.