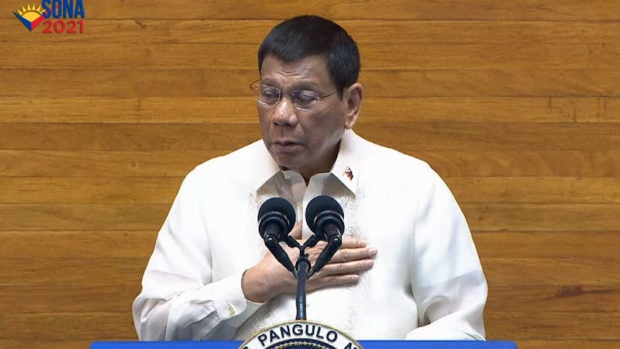 President Rodrigo Duterte delivers his final State of the Nation Address on Monday, July 26, 2021, at the Batasang Pambansa. Screenshot from RTVM youtube live

MANILA, Philippines — Towards the end of his almost three-hour last State of the Nation Address (Sona) on Monday, President Rodrigo Duterte had to stop and catch his breath, and then joke that he just might die right at the rostrum of the Batasang Pambansa’s plenary hall.

Duterte’s final Sona appeared to be the longest ever for a President of the country. Unofficial clock count indicates that he started his speech at 4:13 p.m. and ended it at 6:58 p.m. – roughly 2 hours and 45 minutes.

The presidential communications office earlier said the President will deliver an hour-long Sona.

But Duterte’s Sona this year was filled with ad-libs or deviations from his prepared speech.

It also has pieces of jokes, as usual.

During his speech, Duterte joked about probably having COVID-19 symptoms since he could no longer pronounce his words. He touched his neck as if testing his temperature and then asked if there was an ambulance nearby.

READ: Another joke? Duterte mulls return of Balangiga bells to keep US away

There was even a point when, upon noticing that he has been talking too long at the podium, he asked the audience in the plenary to raise their hand if they already want to go home, and then went on to claim that he himself wanted to end his speech because he already felt like peeing.