The shifting sands of vaccination in PH | Inquirer News

The shifting sands of vaccination in PH 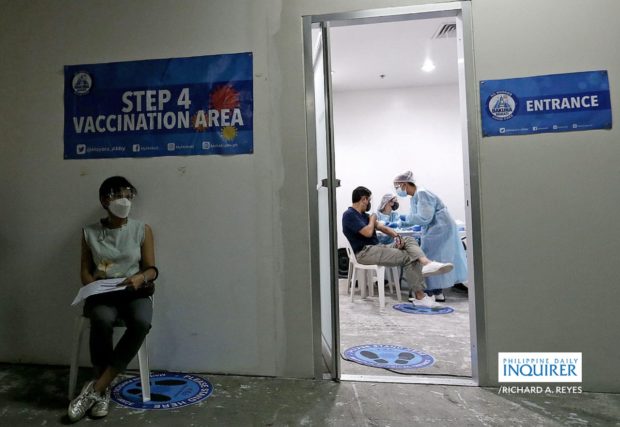 People under A4 category or economic essential workers receive their first dose of Sinovac’s Coronavac jab at the newly-opened vaccination site in Makati City on June 10, 2021. (Richard A. Reyes/Inquirer)

MANILA, Philippines—The government is clear about its goal in vaccination—achieve herd immunity.

The path to get there, however, is strewn with uncertainties, mainly about supply availability, that also leave one question unanswered—when?

The recent detour of COVID-19 cases from their ground zero in the past weeks, National Capital Region (NCR), to areas outside the capital has rearranged a key component of the vaccination plan—where to deliver the doses first.

As cases decline in NCR, COVID-19 takes a detour to provinces

Last May, vaccine czar Carlito Galvez Jr. had disclosed a game plan to beat the pandemic—give priority in vaccination to what he said were strategic areas with high infections. These are areas that can deliver the “highest economic and social impact” through herd immunity. NCR was the main priority.

But a surge in infections outside the capital is redrawing the mapped strategy.

Galvez endorsed an organization’s call to include more areas outside the NCR Plus 8 bubble as priority recipients of vaccines amid increasing cases of COVID-19.

Mayors ask for more jabs outside NCR Plus

While the government tries to maneuver its way to achieving herd immunity amid shifts in priorities and changes in policies, it would be interesting to know how the vaccination program is proceeding.

Progress made so far

As of Thursday (June 10), the Philippines has received a total of 12,608,210 vaccine doses, according to the National Task Force (NTF) against COVID-19. Around 64 percent, or 6,580,000 doses, of total vaccine supply were procured using the P72.5 billion allocation for the vaccination plan.

Several manufacturers, led by China’s Sinovac, had already delivered vaccines to the Philippines resulting in these brands being available:

NTF data said that as of Monday (June 7), at least 8 million doses had already been distributed nationwide. 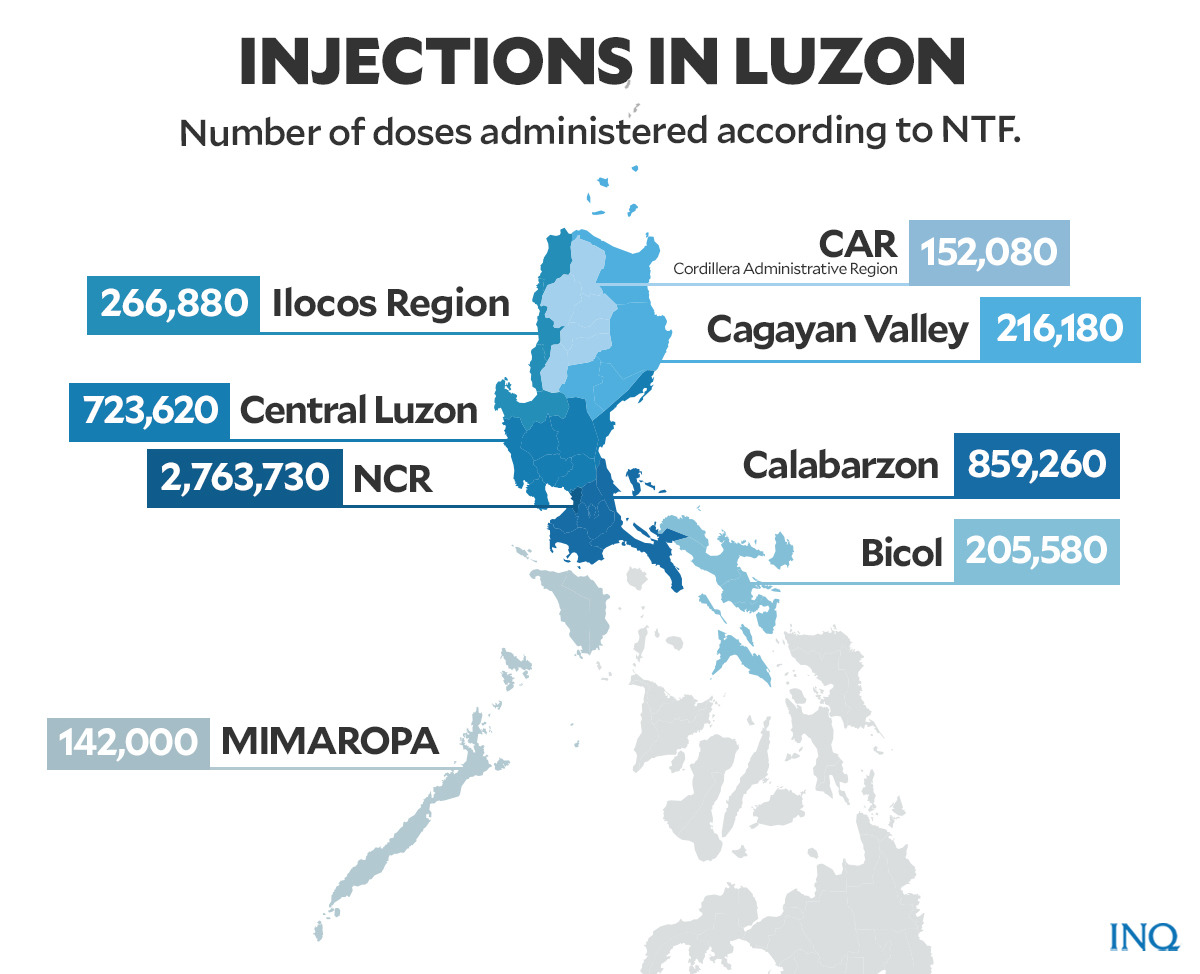 While there was no breakdown on how many doses were sent per region out of the 8,328,860 recently distributed vaccines, data from May 18 showed the following regions receiving their share: 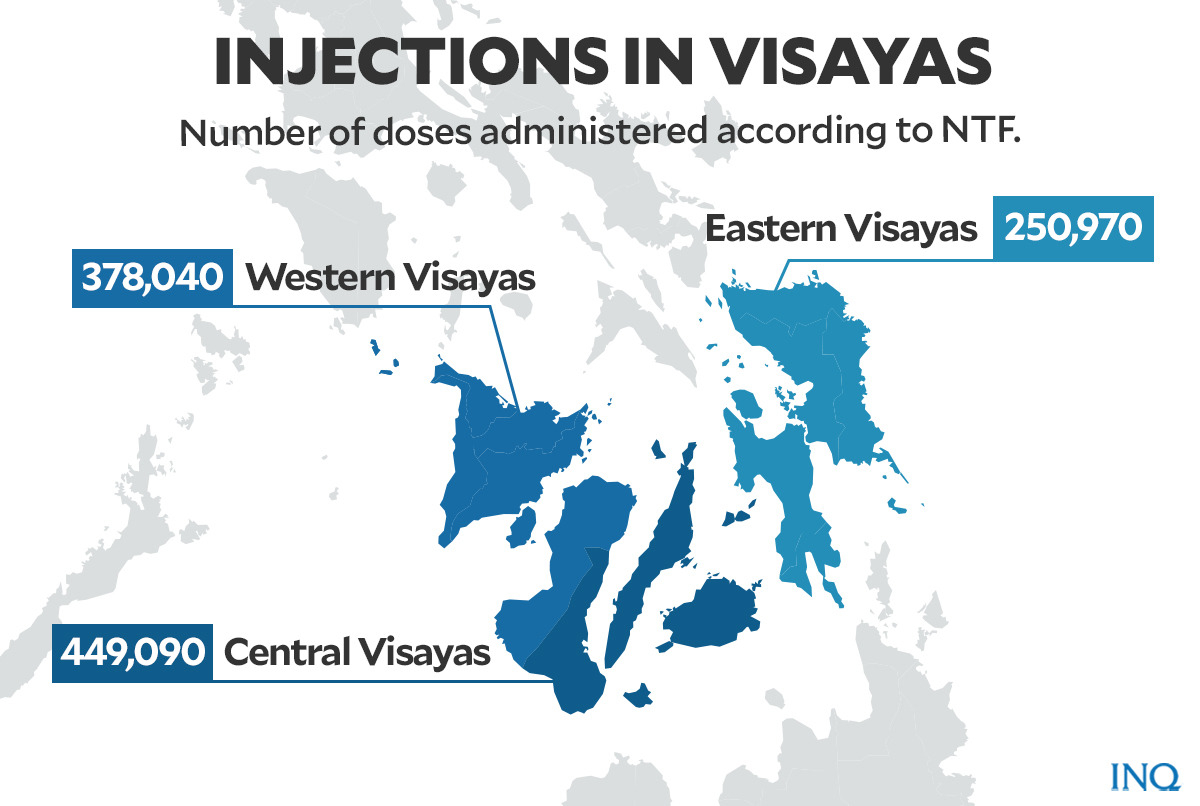 According to Galvez, a total of 1,604,206 individuals have been fully vaccinated as of June 7.

Toward the end of May, the League of Cities of the Philippines (LCP)—a national organization of city mayors—appealed to the government to expand areas on the vaccine priority list. 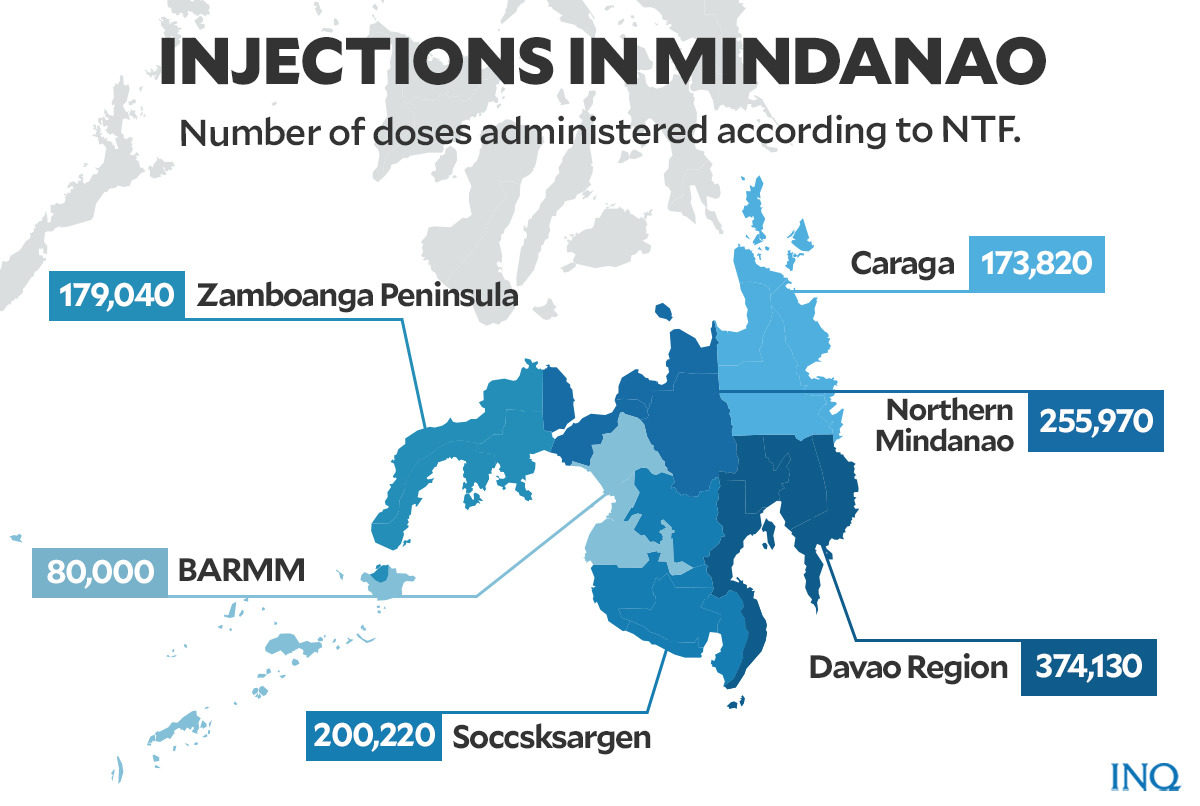 In a letter signed by LCP national president and Bacolod City Mayor Evelio Leonardia and Calapan City Mayor Arnan Panaligan, the mayors outside NCR appealed for more vaccine shipments to places where infections are rising and outside the NCR Plus 8.

Other areas outside the NCR Plus 8 bubble, like Cagayan de Oro City, also saw a spike in new infections with an average of 118 daily cases from June 1 to 7. Bacolod had 112 average cases per day. Iloilo City had 111 per day and General Santos City had 72 cases per day.

Octa also tagged these as areas of concern:

The shortage in vaccine supply and unequal distribution of doses in past weeks were felt not only in areas outside the NCR Plus 8 but also in some cities within the bubble.

Just last week, as the government prepared to roll out vaccination for economic frontline workers, officials of Antipolo City announced a suspension of injections because of lack of supply.

Bukod sa A1, A2 at A3, MALAPIT NA din daw payagan ang A4 simulan … pero wala namang bakunang dumarating 😭May…

“Aside from A1, A2 and A3, it was said that A4 would be injected, too,” said Jun Ynares, Antipolo government spokesperson. “But no vaccines are coming,” he said in a Facebook post.

“Even if supplies arrive, IATF and DOH will give priority to those from NCR or Metro Manila,” he said. “If Manila and Quezon City received an estimated 500,000 doses each, what Antipolo received was less than 10 percent,” he said in Filipino.

Galvez, a few days after the vaccine rollout for essential workers, said sorry for the shortage of doses.

Galvez said some vaccination sites in Metro Manila had a shortage in doses after the government allocated 80 percent of 1 million Coronavac doses, that arrived last June 6, to areas outside NCR Plus 8.

After acknowledging and admitting supply shortages in Metro Manila and nearby provinces, Galvez said more doses are coming that would stabilize supply by June 14.

He said at least 3.2 million more doses of Coronavac, the Chinese-made vaccine, and 2.2 million from Pfizer had been expected to arrive last June 10.

“We see that we will have a supply this coming June 14,” Galvez said.

“By June 14, our supply will normalize,” the vaccine czar said on Wednesday (June 9). 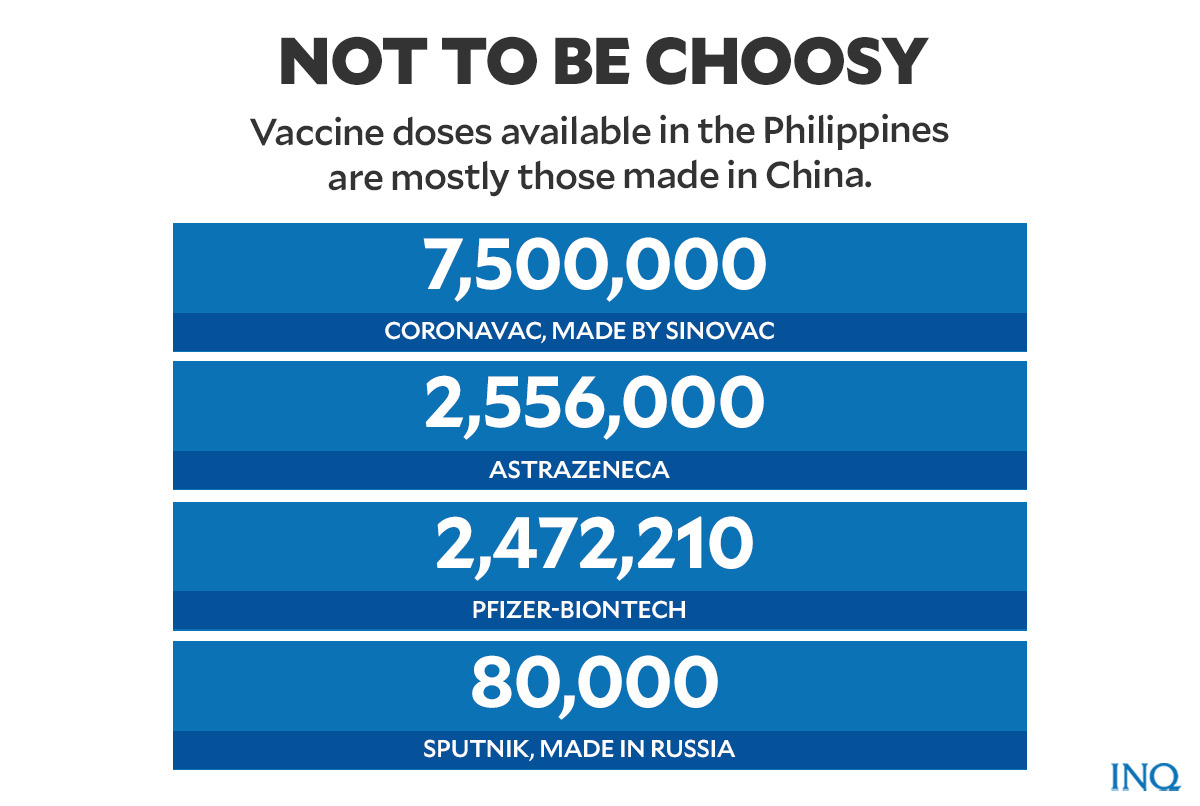 Last April, OCTA Research urged the government to focus on NCR and areas with high cases in vaccine distribution.

Prof. Ranjit Rye, of Octa, said the group was drawing up two vaccine models with the same objective of “optimizing” vaccine deployment to NCR Plus 8.

The models, according to Rye, will not help much in achieving herd immunity, but will result in a decline in COVID infections.

“If we do this, we might not achieve herd immunity but we will achieve a situation of decline in cases and a very good basis for opening up the economy,” he said.

The Department of Health (DOH), however, was not in favor of the group’s recommendation which the department described as “not feasible” and “not appropriate.”

“They have recommended allocating 90 percent of the supply to the NCR Plus bubble,” said Health Undersecretary Maria Rosario Vergeire at an online press briefing last May 24. “We think this is not possible because there are also other regions that need our attention,” she said.

According to Vergeire, the government is already implementing a “focused intervention” in hopes of slowing down cases.

She said allocating 90 percent of the Philippines’ vaccine supply to NCR Plus 8 is not yet appropriate since overall supply is insufficient still.

Companies in the private sector, on the other hand, said that they were committed to helping the so-called NCR Plus 8 by donating doses of AstraZeneca COVID-19 vaccines for allocation only in areas within the bubble, according to businessman Joey Concepcion, presidential adviser for entrepreneurship.

The private sector, local government units and the national government have signed a tripartite agreement for a total of 17 million doses of AstraZeneca jabs.

Some 2.5 million doses of these vaccines would arrive in July and August and would prompt the start of the private sector-led vaccination of its workers.

Aside from expanding the priority list to essential workers, the national government had also expressed interest in buying an additional 60 million vaccine doses to inject the youth.

At a press briefing, Galvez said at least 39 million doses would be needed. “The implication of that is we need to buy more vaccines. More or less 60 million doses,” he said.

He said the NTF is currently negotiating with manufacturers for more doses to increase the original target of doses from 158 million to 202 million. These would include doses from the World Health Organization’s Covax facility.

Galvez made the statements after the US Food and Drug Administration approved the use of Pfizer vaccines on children between 12 and 16 years old.

In addition, the private sector vaccination for employees was expected to start in July, according to Concepcion.

Private sector to start vaccinating workers vs COVID-19 in July

Despite the series of discussions and revisions, the government on May 28 was able to finalize and simplify criteria for the vaccination of essential workers or those in the A4 priority group.

Previously, the government’s list of persons in the A4 category were transport workers, market vendors, religious leaders, OFWs and others.

The list of priority vaccine recipients was not the only variable in the vaccination program. Changes have also been made in policies.

Around May, the DOH pushed for a “brand agnostic” policy, meaning people getting injected won’t know what kind of vaccine they’re receiving until the needle is already ready to pierce their arms.

The policy was suggested after large crowds turned up in vaccination sites in Manila and Parañaque when local officials announced the brand of vaccines awaiting the people.

The same policy is being enforced by the Department of the Interior and Local Government (DILG).

READ: Vaccine brand preference is not unique in PH

Another change in policy was on the tripartite agreement between the government and private companies which previously required the private sector to donate half of the vaccines they would buy.

On Tuesday (June 8), Concepcion cited Galvez as saying the private sector would no longer be required to donate vaccines as a condition for the tripartite purchase deals.

“They’re making it official that there’s no need for us to donate anymore,” said Concepcion in an interview with ANC.

“I asked him why and he said the government will have sufficient doses,” the business leader said.

It should be noted, however, that despite the many changes in vaccine policies, there remained the need to heed basic health protocols.

As WHO said last year, vaccines are not enough to defeat COVID-19.

“Vaccines and vaccination will add a major, major, powerful tool to the tool kit that we have. But by themselves, they will not do the job,” Ryan said.