Vaccine brand preference is not unique in PH 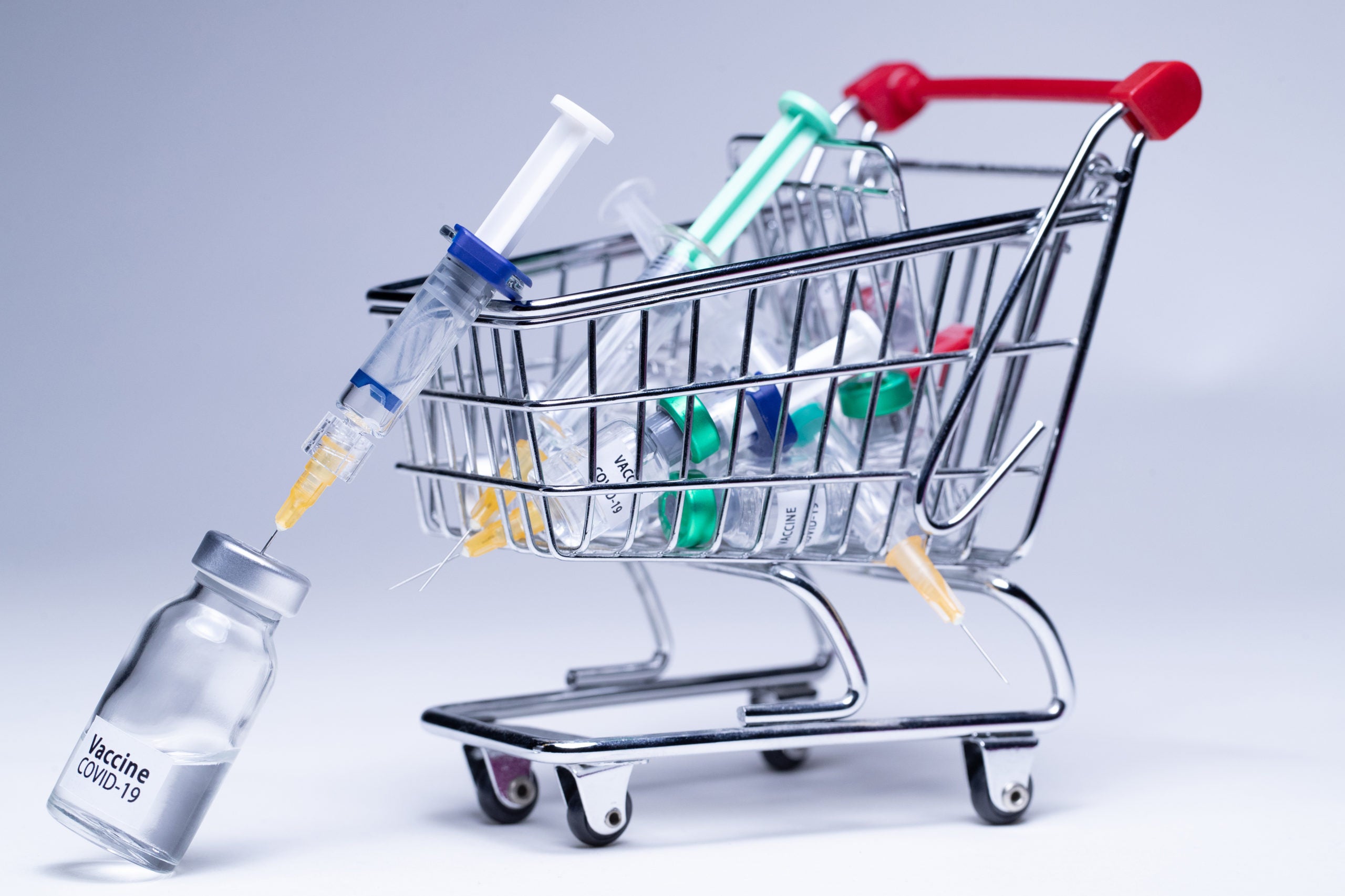 This illustrative photograph taken in a studio shows a miniature shopping cart with syringe and bottles reading “Covid-19 Vaccine”, in Paris, on January 8, 2021. (AFP)

MANILA, Philippines—Six out of 10 Filipinos tend to prefer coronavirus vaccines made in the United States, according to results of a recent survey by Social Weather Stations (SWS).

The SWS survey results, from a field of 1,200 respondents, showed that 63 percent of Filipinos wanted to get injected with US-made vaccines.

Most Filipinos prefer US as source of anti-COVID vaccine

Vaccines made by companies in China, Japan, Australia and the United Kingdom were on the list of the top five preferred countries of vaccine origin among Filipinos.

In terms of brand preference, SWS reported that 39 percent of Filipinos would agree to get injected with Coronavac, the vaccine made by China’s Sinovac BioNTech, which had sent over 5 million doses (1 million donated and 4 million purchased) sent to the Philippines.

Around 33 percent of respondents said they wanted jabs from Pfizer-BioNTech, while 22 percent selected Oxford-AstraZeneca.

Vaccine brand preference among people in the United States, which has so far vaccinated 130.01 million of its total population, has also been revealed in a recently published survey.

What US residents say

To see the vaccine brand preference in the US, a survey of 1,000 people by M Booth Health, a health communications consultancy, and Savanta, a market research and advisory company, was conducted last April.

The survey, however, covered only three vaccine brands, all of which are made in the US—Pfizer, Moderna and Johnson&Johnson.

Of 1,000 respondents, 74 percent said it already had a preferred vaccine brand.

Driving factors and the ‘comparison shopping’

In terms of the factors that might have possibly influenced respondents’ preference for a specific brand, most respondents who favored Pfizer and Moderna cited the brand’s vaccine efficacy as their primary consideration.

Those who preferred Johnson&Johnson attributed their choice to the vaccine brand’s “one and done” nature.

“This is what we really want to see, after all, it’s a life-saving drug,” Westhall said.

The US survey results, however, showed that positive news reports and social media posts are likely influencing factors in vaccine brand preference.

Westhall said these factors ranked higher in influence among vaccine users than “being recommended by a medical professional.”

“What you’re seeing here is how these huge levels of news coverage combined with consumers sharing these brands on social media have directly influenced preference on something – which when you think about it, should only be about whether or not the drug works safely,” he said.

This kind of consumer behavior seen among people toward vaccine brands was given the term “vaccine brand comparison shopping” by international news organization Quartz.

This is when individuals or consumers “look to the news, social media and even friends to determine which potentially life-saving medicines they should take,” as described by Westhall.

“This behavior conversation has intensified rapidly,” he said.

Brands administered by manufacturers in US

Pfizer was not only the most sought-after vaccine brand but also majority of the total of 285.51 million vaccine doses administered in the US were manufactured by it, according to data from the science online publication Our World in Data (OWID).

As of May 23, a total of 285.51 million vaccine doses had already been administered in the US. At least 154.12 million doses were made by Pfizer-BioNTech.

At least 121.13 million doses of Moderna’s vaccine had been injected and 10.27 million doses came from vaccines produced by Johnson&Johnson.

In terms of which vaccine brand has been ordered or bought the most across the globe, British-Swedish multinational pharmaceutical and biopharmaceutical company AstraZeneca topped the list.

Data in a report published by data consumer company Statista showed that as of March 2021, around 3.009 million doses of vaccine doses from Oxford AstraZeneca had already been purchased.

It is followed by 1.404 million of NVX-CoV2373 vaccines made by Novavax, a late-stage US biotech firm.

Pfizer-BionTech has sold a total of 1.220 million doses of BNT162b2 mRNA vaccines against COVID-19. Moderna, on the other hand, secured around 816 million procurements for their vaccines.

While vaccine brand preference is not something unique in the Philippines or among Filipinos, the government is still urging the people to get vaccinated no matter the brand or country of origin.

Following reports about a queue for Pfizer vaccines that went out of control in Paranaque City, President Rodrigo Duterte ordered vaccine program enforcers to keep vaccine brands unknown until people are about to get injected with those.

The Department of Health (DOH) last week said it was open to reviewing the proposed vaccination “brand agnostic” policy where local government units (LGUs) will no longer announce in advance the brand of vaccine to be administered.

The policy was based on a directive by Duterte which aims to address vaccine hesitancy and brand preference.

The World Health Organization (WHO) had expressed support for the administration’s policy which WHO said would help in preventing crowds and would also convince people to get whatever vaccine is available.

The Commission on Human Rights (CHR), however, reiterated that human rights should never be compromised in dealing with the health crisis.

“This position stresses the four elements of availability, accessibility, acceptability, and quality (also known as the AAAQ Framework) in the enjoyment of the right to health by all,” De Guia said

“Time and again we stress that, in ending this pandemic, respect and promotion of human rights must always be at the center of all government actions,” she said.

“Human rights are not to be compromised, but should rather be prioritized. Ending this pandemic, after all, is in pursuit of the people’s right to health and a safe and healthy environment,” De Guia added.

Local officials and lawmakers had warned that keeping vaccine brands unknown until injection could only worsen hesitancy among Filipinos.