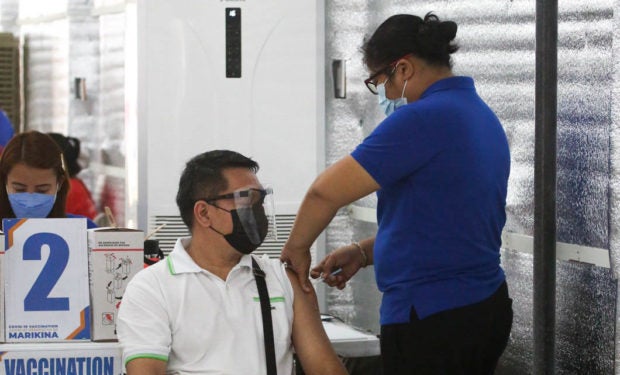 MANILA, Philippines — The World Health Organization (WHO) on Monday backed the Duterte administration’s policy not to announce vaccine brands to be used in inoculation sites to avoid congestion arising from people’s preference for a certain brand.

President Rodrigo Duterte ordered a stop to the announcement of brands after scores of people flocked to a shopping mall and failed to observe proper distancing as a protocol during the pandemic in an attempt to get the Pfizer vaccine.

An individual would only be informed of the brand at the vaccination site and could still refuse to be given it.

The brand-agnostic policy would help in preventing crowds and would also convince people to get whatever vaccine is available, said Rabindra Abeyasinghe, the WHO representative to the Philippines.

“I think this is a correct step in the right direction because this will help us to manage these kinds of superspreader events from happening and will also encourage people to accept the vaccines that are being rolled out. So we are supportive of this effort,” he said in a Malacañang-led briefing.

Abeyasinghe said there was a need for the government to manage the congestion at vaccination sites so as not to increase coronavirus infections. It does not matter which brand an individual would receive as all COVID-19 vaccines are effective in preventing deaths and severe disease, he said.

The WHO official said vaccine preference should not be interpreted as hesitancy, which he added was considered to be a problem in the Philippines. Traditionally, he said, the country had some vaccine hesitancy, but people now want to get inoculated.

“Actually, the issue is that the vaccine supply cannot meet the demand,” Abeyasinghe said. More people want to get inoculated than there are doses available, he said.

“What we are seeing now is that people are eagerly ready to receive vaccines and it is in some situations, local governments are unable to keep up with the demand. So it’s not actually an issue of vaccine hesitancy. There are many, in some places, preference for brand A or B of a vaccine. That should not be interpreted as vaccine hesitancy,” he said.

Meanwhile, presidential spokesperson Harry Roque said the President’s inoculation with the Sinopharm vaccine, which has yet to get emergency use authorization in the Philippines, would help bolster confidence in Chinese vaccines.

Roque made the statement when asked if a different standard applied to the President since the administration had been asking the public not to be selective when it comes to COVID-19 vaccine brands.

The only Chinese vaccine that has been allowed for emergency use in the country is the one from Sinovac.

According to him, Duterte did not select a “stateside brand” that is apparently preferred by many.

“Our problem now is that it seems many prefer stateside vaccines,” he said.

Two million doses of the Pfizer vaccine are expected to be delivered to the Philippines before the end of June or as early as within the next 10 days, Abeyasinghe said. But, he said, it was unclear if the doses would come in one shipment or two tranches.

Another two million doses of the AstraZeneca vaccine are set to be delivered to the Philippines within June, he said.

The COVAX facility, a WHO-led procurement mechanism to ensure the equitable distribution of vaccines, has committed to providing vaccines to cover 20 percent of the Philippine population, comprising front-line health workers and elderly people.

Abeyasinghe said the vaccines would maximize impact on the pandemic by reducing deaths, ensuring that front-line healthcare workers are fully protected, and reducing congestion in hospital settings.

The COVAX facility was set up through contributions, overseas development assistance, and bilateral donations, and in support of lower- and middle-income countries, he said.

As of Sunday, the Department of Health (DOH) reported that 949,939 people had been fully vaccinated while 3,147,486 had received at least one dose. The country is administering an average of 162,514 doses daily, it said.

Health Undersecretary Maria Rosario Vergeire said vaccinating at least 70 million Filipinos to achieve herd immunity against COVID-19 was a long-term goal due to the availability of vaccines. The short-term goal, she said, was to reduce hospitalizations and deaths.

“For us to reach the 70 million target, we need around 500,000 jabs a day. But for us to do that, we will still be highly dependent on the supply of vaccines,” Vergeire said on Monday.

The DOH backed the use of churches to ramp up mass vaccination against COVID-19 as proposed by its experts for the National Immunization Technical Advisory Group (Nitag).

“Churches are usually well ventilated, especially the bigger ones. These can be of big help to our inoculation efforts,” Vergeire said.

“We talked to the private sector and all of them are very much willing to help us,” said Vergeire.

The Catholic Bishops’ Conference of the Philippines has offered churches as vaccination sites since January.