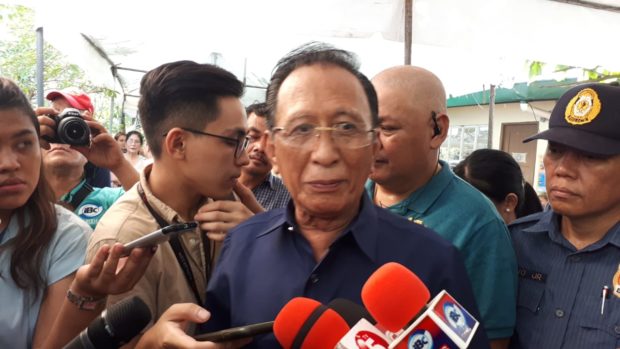 Crisologo, along with his son lawyer Frederick William, were arrested on Sunday for alleged obstruction of justice after allegedly trying to stop the arrest of his supporters supposedly involved in a vote-buying incident in Barangay Bahay Toro in Quezon City.

However, Esquivel said that the police would still conduct a preliminary investigation between 10 to 15 days of Crisologo’s release.

Crisologo, his son and 44 others, are facing complaints of such as unjust vexation, direct assault, and obstruction of justice, violation of the Omnibus Election Code, disobedience and resisting arrest, usurpation of authority and illegal detention.

In an interview with reporters, Crisologo said he felt vindicated after the resolution allowing his release was approved.

“Yes, because I know it was a false charge,” Crisologo told reporters when asked if he feels vindicated after his release.

“[It is] a charge to prevent me from exercising my right to vote and to demoralize my followers. But I think it worked the other way around; I got sympathy perks,” he added.

The mayoral candidate denied the police reports claiming he shouted at and humiliated the police officers during the arrest.

He earlier claimed that the arresting officers were not in uniform and did not have a warrant to search the premises.

Crisologo also claimed that the station commander of Quezon City Police station 3 did not respect their rights during the arrest.

“He did not respect anymore the rights of a lawyer, ‘sige posasan na yan’ [sabi ni Colonel Alberto], pinosasasan anak ko, pinosasan ako so what kind of police do we have?” the QC mayoral bet said.

“Talagang ang daming testigo na nakakita n’on. So we will follow that after the elections,” he added.  (Editor: Jonathan P. Vicente)