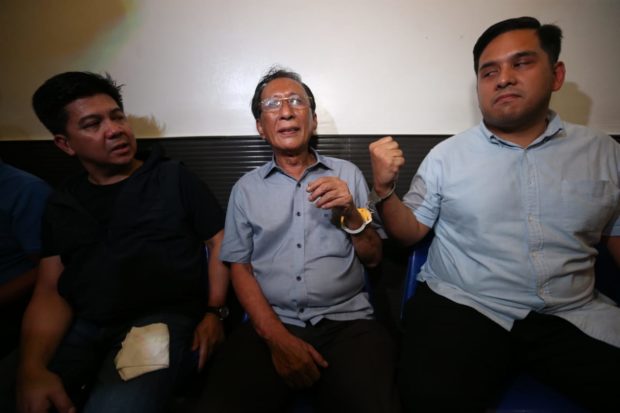 Crisologo and his son were arrested in a vote-buying operation in Brgy. Toro, Quezon City on Sunday night.

“He is being charged for obstruction of justice,” PNP chief Gen. Oscar Albayalde said in a press conference in Camp Crame in Quezon City.

Albayalde explained that Crisologo went to the police operation on vote-buying in Brgy. Toro and reportedly barred the police officers from going outside by padlocking the gate.

Crisologo was also said to have shouted at the police officers and “intimidated” them.

Aside from obstruction of justice, Crisologo and his son is also facing charges of unjust vexation and direct assault, Albayalde said.

However, Crisologo’s campaign manager earlier said Crisologo and his son only went to the said area after receiving a report that police officers had raided the house of one of their poll watchers for alleged vote-buying.

The elder Crisologo also earlier claimed that their rights were not read to them and that they were not informed of the nature of the arrest.  He also claimed that the police officers were not wearing any uniforms and did not have a search warrant.

He sought the help of his supporters through a Facebook post, asking them to go to Camp Karingal, headquarters of the QCPD, to press for his release.

Albayalde said the PNP will investigate the matter and the policemen involved will be “made answerable.”

“Pasasagutin natin sa mga allegations na ‘yun na hindi sila (police) naka-uniporme, bakit nila pinasok yung bahay without any search warrant. I’m sure they have the reason why,” he said in a separate interview with reporters at Camp Karingal.

He added that it is Crisologo’s “right” should he decide to file a complaint against the arresting officers.