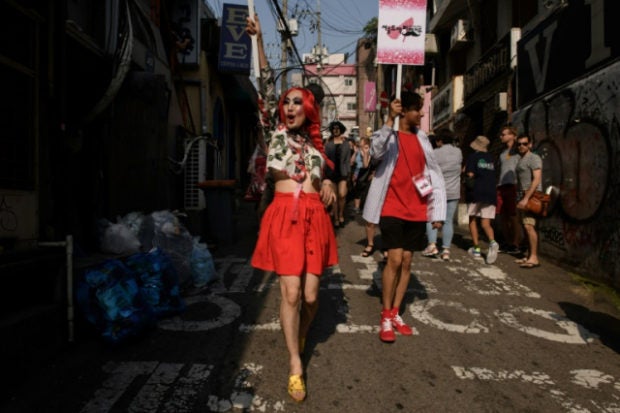 South Korea held its first ever drag parade this weekend, a small but significant step for rights activists in a country that remains deeply conservative when it comes to gender and sexuality.

Dozens of drag queens and kings marched through Itaewon on Saturday, a suburb of Seoul best known for its nightlife and a nascent but vibrant gay scene.

Carrying rainbow flags, they cheered and strutted their best outfits, receiving shouts of support and the odd baffled look from those they passed.

While homosexuality is not illegal in South Korea, same-sex marriage is not recognized and people cannot legally change their birth gender.

The country is home to a large evangelical Christian community and LGBT people feel pervasive pressure to to stay closeted.

“When it comes to South Korea, human rights guarantees for sexual minorities are insufficient,” Yang Heezy, a drag queen and the organizer of Seoul Drag Parade, told AFP.

“Today’s drag parade and more queer culture festivals should take place to bring attention to sexual minorities and help those who are not from those minorities learn more,” he added, sporting a flame red wig and floral dress.

Both South Koreans and foreigners participated in Saturday’s parade.

One participant, who gave her drag queen name Lola Bank, said there was a feeling of exhilaration among marchers.

“The fact that we are able to be in public in drag is a huge milestone to queer acceptance in Korea,” Lola enthused, dragging on a cigarette.

“I’ve always struggled with my masculinity and my femininity. And when I get in drag I’m saying kind of like a ‘fuck you’ to society’s expectations of how I should behave as a male.”

Gay pride parades have been a fixture in South Korea for years but have often been protested by religious groups, who have held rival anti-homosexuality rallies while trying to physically block marchers.

Gay rights activists claim that some progress has been made in recent years, with surveys showing increasing tolerance — particularly among young people — and growing participation at gay pride events.

Lee Hyang-soon, an elderly street vendor, smiled and waved to participants as they passed.

IN PHOTOS: Coming together for love and equality at the 2017 Metro Manila Pride March