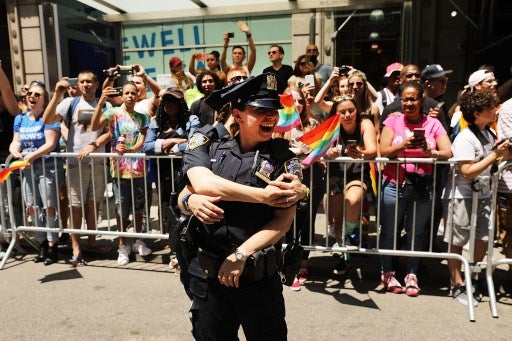 Two female police officers embrace as people march down 5th Ave. in the annual New York Gay Pride Parade, one of the oldest and largest in the world on June 25, 2017 in New York City. Thouands cheered as members of LGBT community danced and marched under a bright summer sun. Many participants carried political themed signs as President Trump’s adminstration has angered some in the LGBT community. AFP/GETTY IMAGES FILE PHOTO

On foot, astride motorcycles or riding on flatbed trucks, participants slowly covered the 2-mile (3-kilometer) route from Midtown Manhattan to Greenwich Village, where the movement for homosexual rights was born after the so-called Stonewall riots of 1969.

New York’s Gay Pride march has spawned copycat demonstrations in almost every corner of the world. But while police in Istanbul fired rubber bullets at participants to disperse marchers, the parade in New York is a long-accepted institution.

Under a brilliant sun, hundreds of police officers and some of New York’s most prominent politicians — Mayor Bill de Blasio, Governor Andrew Cuomo and Senator Chuck Schumer, all Democrats — marched cheerfully alongside participants, some of the latter in the scantiest of outfits.

The 2015 edition of the march celebrated the nationwide legalization of gay marriage.

Last year, the mood was somber, coming after a shooting massacre at an Orlando, Florida gay nightclub left 49 people dead.

This year, many marcher carried “Resist” posters, expressing their disdain for President Donald Trump’s policies and priorities — notably the effort to roll back the Obamacare health reforms, as well as moves to curtail the rights of transsexuals.

Gavin Grimm, a transsexual student whose demand that he be allowed to use the boys’ bathroom at his high school gained nationwide notoriety and was taken up by the American Civil Liberties Union, was designated a grand marshal of the parade.

He told the Agence France-Presse that the recent Supreme Court decision to review the matter was “unfortunate (and) very disappointing,” but added that “I feel it was only a roadblock in a fight that we all know was going to be long anyway.”

While many participants were clearly, and vocally, opposed to Trump, many others said they did not want the march to become a politicized event.

“It’s not political, its social,” said Cara Lee Sparry, a New Yorker who has taken part in a dozen such marches.

“Just to be surrounded by hundreds and thousands of people going ‘Yeah’ for hours, is incredible. You can’t beat it!”/rga