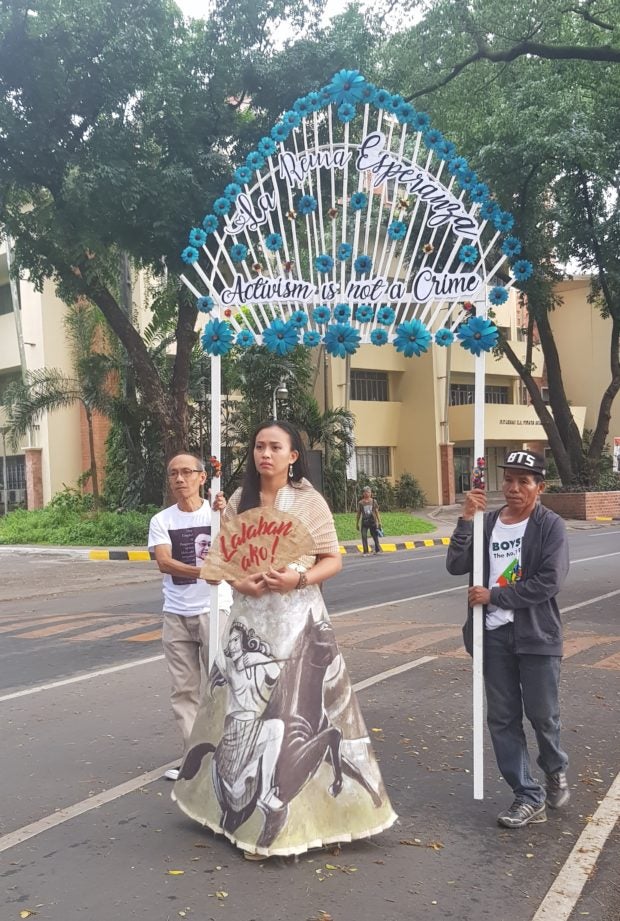 Protesta de Mayo, a political version of the traditional Flores de Mayo religious procession held at the University of the Philippines in Diliman on Saturday, featured five women activists dressed in symbolic gowns to represent “injustices experienced mostly by women” under the Duterte administration.

Clad in a black-gold gown, De Guzman decried the hardships and struggles experienced by all political prisoners arrested on trumped-up charges for their activism.

The organizers said her sun headdress symbolizes how the struggle for the oppressed radiated like “sunburst,” while her shackles depict how the current administration “persecutes those who stand up for truth and justice.”

“It seems our family is under fire. My father is a peace consultant. I and my partner are activists. We have been a picture of the crackdown on activists,” De Guzman said.

“But I know this is not the end, especially that I see the support of the people. This is part of a bigger fight…for human rights, against tyranny… The only way to overcome this is to fight,” she added.

De Guzman, who has a degree in political science from UP Diliman, was with her nine-year-old son, Julius Raphael Li Maga, during the procession.

“Gusto po natin ipakita ang totoo (We want to show the truth), to stop the killings, to stop political prisoners…Wala po silang kasalanan (It’s not their fault). Ginawa (sa kanila) ito para mapalungkot ang mga pamilya nila (This was done so their families will suffer),” the younger Maga, who wore a Katipunero outfit, said when asked why he joined the procession.

De Guzman called for the immediate release of all political prisoners, including her father and partner who were arrested this year. Her son had the same wish for his father and grandfather.

Eleanor de Guzman, as La Reina dela Justicia, demands the release of all political prisoners including her father and partner. PHOTO by Jodee A. Agoncillo

She also denounced the systematic filing of trumped-up charges against activists and peace advocates and expressed hope that the resumption of the formal peace talks between the government and the communist rebels in June would be based on respect for human rights, addressing the roots of armed conflict, and complying with previously signed agreements and both parties’ commitment to pursue just and enduring peace.

Meanwhile, Deborah Escudero was dressed in a bloodied Filipiniana gown dotted with a bullet hole near the chest designed by fashion designer Albert Fontanilla. As La Reina delos Martires, she also wore a yellow sash that says “police line do not cross.”

She said her attire represents the fight of all victims of extra-judicial killings, including her brother Ephraim who was killed in September last year.

In an interview, Escudero said her 18-year-old brother went missing last September 19 and turned up dead five days later in Pampanga, his body wrapped in a packaging tape.

Closed-circuit television footage showed that his brother was driving his motorbike when two unidentified suddenly appeared and rode his vehicle. One of the men, who, according to reports, had just been released from prison, was also found dead later. The other man was identified as a “police asset.”

Escudero denied her brother’s involvement in illegal drugs, saying that even people who are involved in the drugs trade still have rights and do not deserve to die.

She said joining the procession is her way of continuing the fight for her slain brother who left two children aged 3 and 2.

Meanwhile, Miranda Dacillo, a Karapatan volunteer, represented the victims of extrajudicial killings of journalists and those deprived of their rights to self-expression.

As La Reina de Verdad, she wore a skirt made of newspapers designed by former College of Editors Guild of the Philippines (CEGP) presidents Rey Asis and Jani Llave.

Joy Alvarez, a Lumad youth, was La Reina dela Paz Gleeza and represented the struggles of the Mindanaoans. The activist groups said there have been at least 49 Lumad peasants and Moros killed, as well as thousands of people displaced due to the military operations under martial law. 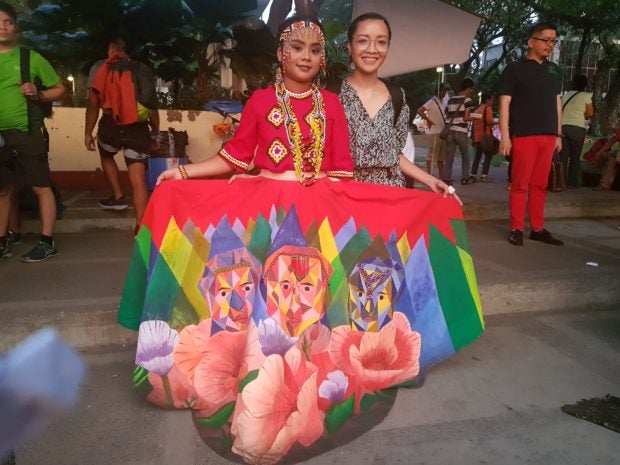 Joy Alvarez, a Lumad youth, represents the struggles of the Mindanaoans as La Reina dela Paz Gleeza. PHOTO by Jodee A. Agoncillo

Karapatan legal counsel Maria Sol Taule, one of the lawyers of Australian missionary Patricia Fox, designed the gowns of Omano and Alvarez.

Omano’s gown featured the figure of revolutionary leader Gabriela Silang on her skirt, which shows people that activism is not a crime, according to Taule.

Alvarez, meanwhile, wore a traditional Manobo blouse with Taule’s handpainted design depicting the indigenous people’s struggle for peace, and their rights to ancestral domain and self-determination.

The parade, organized by human rights activist groups Karapatan and Hustisya, is part of the  Babae Ako, Lalaban Ako campaign against the President’s “misogyny and sexism,” according to Cristina Palabay, Karapatan secretary general.

Palabay said the political procession has been held three times has since the time of former president Gloria Arroyo.