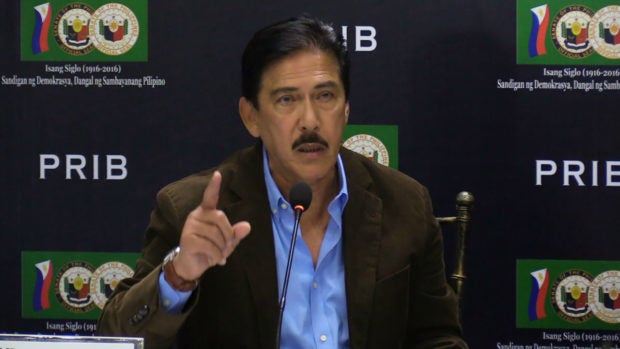 At least 14 senators have signified their intention to choose Sen. Vicente Sotto III as the next Senate President, replacing Sen. Aquilino Pimentel III, according to a highly placed source privy to the matter.

The Senate majority is expected to hold a caucus next week to discuss the chamber’s leadership, among other issues.

Pimentel is expected to file his certificate of candidacy (COC) in October to seek reelection, and Sotto has expressed willingness to replace him with the support of the majority.

On Tuesday, Pimentel told reporters that “there might be” a shakeup in the Senate leadership, and that anybody should always be ready for changes.

He also joked that if possible, he wouldn’t have to leave the position.

“But it’s like this—we should not be too attached to the position. If there’s a change in sentiment, we follow the sentiment,” he said.

Pimentel explained that there was a good reason for having a Senate President whose term would go beyond June 30, 2019, as it would ensure continuity in the chamber after next year’s midterm elections.

His term ends on that day.

At least one senator has been vocal for her support for Sotto as the next Senate President.

Sen. Nancy Binay told reporters last week that she wanted Sotto to be at the helm of the Senate at the start of the 17th Congress in 2016.

But the majority chose Pimentel, the President of the Partido Demokratiko Pilipino-Lakas ng Bayan and party mate of President Duterte, and she went along with their decision.

In a Senate forum last month, Sotto said he was open to succeeding Pimentel because, at the start of the 17th Congress, both had talked about a possible leadership change before the filing of COCs later in the year.

The two chambers of Congress will declare a sine die adjournment on June 1.

Congress will open regular sessions on July 23 and, later in the day, hold a joint session to hear the President deliver his State of the Nation Address.