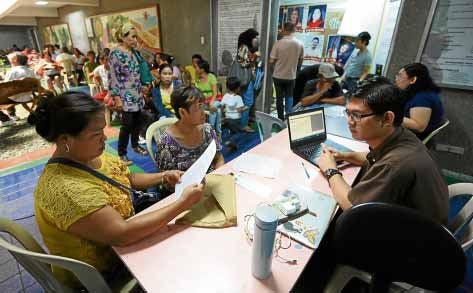 MARCOS VICTIMS The Human Rights Victims’ Claims Board has wrapped up its work to process compensation claims of victims of human rights violations during the Marcos regime.—NIÑO JESUS ORBETA

A number of lawmakers also assailed House Bill No. 7376, which was approved on final reading by a vote of 165-7 on Tuesday.

The first official act of Corazon Aquino after she assumed the presidency following the 1986 Edsa People Power Revolution was the creation of the PCGG to recover the ill-gotten wealth of the Marcoses and their cronies.

The family of the dictator, who ruled the country for 20 years, and their cronies are said to have amassed between $5 billion and $10 billion in ill-gotten wealth and have been linked to the killing, torture and forced disappearance of political foes.

Calling the measure “unacceptable,” the martial law survivors urged the Senate to reject the House bill once it reached the upper chamber.

“We therefore call on the Senate and the public to outrightly expose the bill and reject it for what it is,” said Akbayan emeritus chair Loretta “Etta” Rosales, a martial law detainee and torture victim.

HB 7376 would “strengthen” the OSG by making it the sole authority in all government cases and by placing it under the Office of the President for budgetary purposes.

The functions of the PCGG would be taken over by a special task force composed of at least five divisions, according to the bill.

The task force would maintain and preserve assets pending judicial determination if they were ill-gotten.

Proposals to delegate the functions of the PCGG to Solicitor General Jose Calida, a known supporter of the Marcoses, will not help,  said Rosales, a former Commission on Human Rights chair.

Abolishing the PCGG and giving its powers to a “blind Marcos follower like” Calida is like rubbing salt on the wounds of martial law victims, according to Rosales.

Zenaida Mique, executive director of Claimants 1081, said her fellow members were worried that the passage of the  House bill would make it even harder for claimants to recover the ill-gotten wealth of the Marcoses.

“The move is just another manifestation that the President, his administration, is paying his debts to the Marcoses, paving the way to preserve the behest loans and fruit of corruption of the former dictator’s family,” she said.

Albay Rep. Edcel Lagman said the House of Representatives gifted Calida with expanded powers “[a]s if causing the removal of the Chief Justice through an irregular quo warranto petition is not enough arrogation of power” by the solicitor general.

Lawmakers belonging to the Makabayan bloc reiterated on the floor their earlier objections to the bill’s passage.

ACT Teachers Rep. Antonio Tinio said the PCGG was being abolished despite the fact that it still had to recover more of the Marcos ill-gotten wealth.

According to the PCGG, it recovered more than P170 billion in ill-gotten wealth from the family of the late dictator and his cronies from 1986 to 2015.

“We’re seeing here the continuing efforts of the Duterte administration to rehabilitate the Marcos family—from his allowing the burial of the dictator’s remains at Libingan ng mga Bayani [in 2016] to his support for the vice presidency” of Bongbong Marcos, Tinio said.

The recount of votes for the vice presidency being contested by the younger Marcos is underway.

In the Senate, the chair of the justice and human rights committee said there might not be enough support in the Senate for a counterpart bill.

Sen. Richard Gordon, one of the senators who filed similar bills abolishing the PCGG and strengthening the OSG, said he was no longer in favor of scrapping the agency.

“I’m going to call one more hearing to make sure. They (PCGG) have been able to get back quite a bit. We just need to give it a timeline to finish the work and give it the support needed.”

Sen. Bam Aquino said the move to abolish the PCGG could be a part of a ploy to revise history about the ill-gotten wealth of the Marcoses.