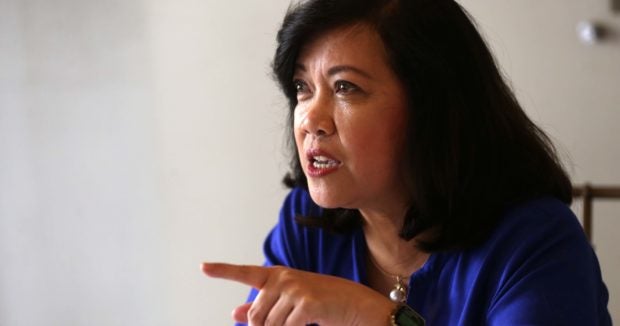 IT AIN’T OVER Chief Justice Maria Lourdes Sereno maintains she did not commit any impeachable offense and has no plans to resign, her spokesperson says. INQUIRER file photo / LYN RILLON

Whether or not the quo warranto case or impeachment complaint against Chief Justice Maria Lourdes Sereno prospers, it would still be a “very sad day” for the judiciary and the High Court, an opposition lawmaker lamented on Tuesday.

“Whatever happens, I think it will be a very sad day for the Supreme Court,” Caloocan City 2nd District Rep. Edgar Erice, a member of the “Magnificent Seven” minority bloc in the House of Representatives, said in a press briefing.

“Because if they act on the quo warranto, it will be unconstitutional. But if they will not act and proceed with the Senate trial then the six justices who participated in the justice house hearings would be reduced into political pawns of politicians,” he said.

“And the end game will be that these justices would be subjected to cross examinations by both lawyers of CJ and senators themselves,” he added.

Erice said the six justices were among the seven SC justices who “figured prominently in the ouster move against Sereno which ended in forcing her to go on an indefinite leave.”

Magdalo Rep. Gary Alejano likewise lamented how the alleged “connivance of some justices with some members of the House to oust Sereno” could weaken the SC as an institution.

“In the next administrations, all those (justices) who connived with the House to the ouster could also be impeached… Pagdating ng panahon, lalong hihina ang ating institusyon dahil silang mga natira na justices pwede rin matanggal,” he added.

(The time will come that our judicial institution will weaken because the justices themselves who remained there could also be impeached.)

Contrary to their views, House Speaker Pantaleon Alvarez, as well as House Majority Leader Rodolfo Fariñas see the quo warranto petition against Sereno as valid, saying it should independently proceed with the ongoing impeachment proceedings against the top magistrate.

On Monday, the Office of the Solicitor General (OSG) filed the quo warranto case to invalidate Sereno’s appointment, accusing her of failing to disclose in full her wealth.

Albay Rep. Edcel Lagman said it was on record that Sereno asked the Judicial and Bar Council (JBC) to excuse her from producing her prior statement of assets, liabilities and net worth (SALNs) when she was a professor in the UP College of Law.

“And the JBC proceeded to include her in the shortlist of nominees for appointment as Chief Justice,” he said, noting that quo warranto petition “has long expired under the Rules of Court” because said case should be filed within one year from the cause of action. /jpv