From appointees being rejected to officials being fired, 2017 marked swift changes in the composition of President Rodrigo Duterte’s “rainbow” Cabinet and administration.

In a span of 12 months, Duterte has sacked several officials, including his longtime friends and allies since his term as mayor of Davao City, over accusations of corruption and wrongdoing. 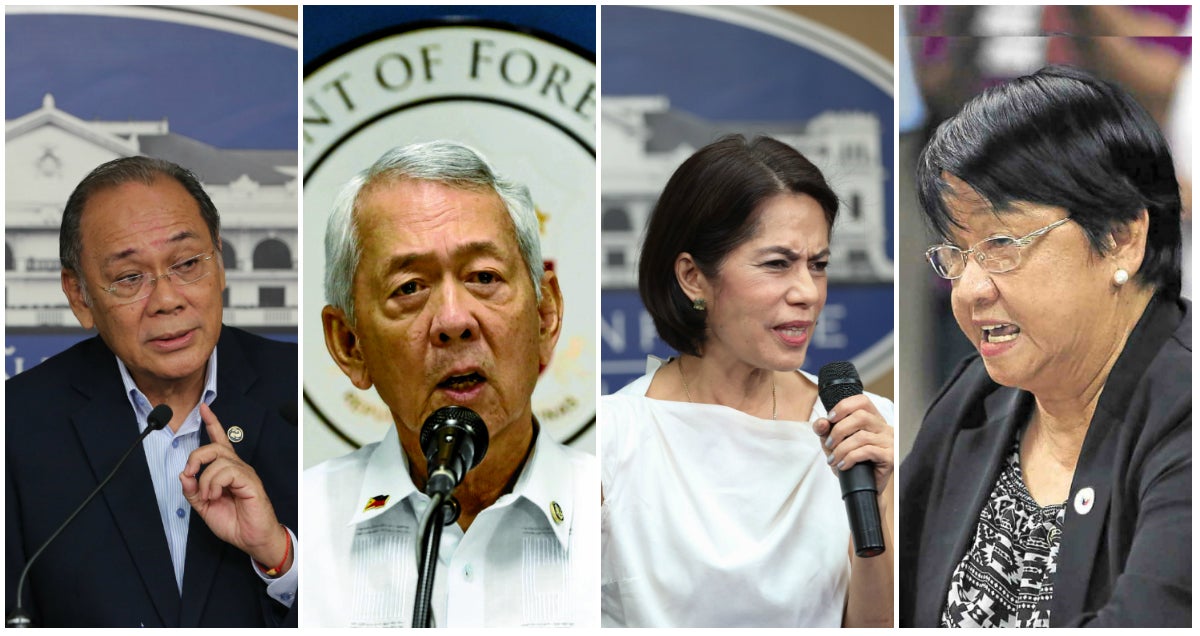 Meanwhile, at least four failed to hurdle the powerful Commission on Appointments (CA)—three of them were people known to have stood firm on their advocacies and beliefs to stir social change.

As 2017 ends, INQUIRER.net looks back on the year that has gone in the Duterte administration and some of the top officials that came with it.

Former Presidential Spokesperson Ernesto Abella, whose manner of speaking is complete opposite of his boss’, was sacked by Duterte in November for reasons he did not disclose. The President only said replacing his mouthpiece was his “personal decision.”

Sources, however, said that Duterte fired Abella because the chief executive was not satisfied how the spokesperson addressed the issue of the administration’s dwindling performance in surveys.

Foreign Affairs Secretary Perfecto Yasay Jr. was the first member of the Duterte Cabinet to be rejected by the powerful CA in March over questions on his citizenship.

Yasay was found to have lied before the CA about his citizenship. He initially told the panel that he never held a U.S. passport but later admitted that he had been granted one in 1986. He argued, however, that it was voided after abandoning his residency in the States.

He was replaced by Sec. Alan Peter Cayetano.

Gina Lopez, known for her strong anti-mining stance, was the second appointee to be rejected by the CA.

During her stint at the DENR, Lopez had ordered the closure of 23 mining operations and the suspension of five mining firms following an industry-wide audit of 41 large-scale mines nationwide. The audit, which uncovered the companies’ non-compliance with mining regulations, was considered by environmental advocates as an unprecedented and historical move to protect the country’s protected areas from degradation.

Her advocacy, however, ended after 10 months into office in May, with the Mining Industry Coordinating Council overturning her decision to ban open-pit mining. She was replaced by former military chief Roy Cimatu.

Judy Taguiwalo, a longtime activist and professor, was the third Duterte appointee and the first nominee of the Communist Party of the Philippines to be rejected by the CA.

The former Social Welfare Secretary said that her opposition to the pork barrel system and the Duterte administration’s tax reform package could be the reasons behind her rejection.

Many expressed dismay over her rejection, including Sen. Ralph Recto who said that Taguiwalo was “not there to represent one color in Digong’s rainbow cabinet. She’s there to serve all the colors of the tapestry of our democracy. She represents all of us, all our dreams, all our aspirations for our nation, our people and our children.”

Duterte then appointed Undersecretary Emmanuel Leyco as the Officer-in-Charge of the DSWD.

Rafael “Ka Paeng” Mariano, former representative of Anakpawis Party-list, was the fourth Duterte appointee and the second nominee of the CPP who failed to hurdle the CA in September.

Before facing the powerful commission, Mariano faced ten oppositions against his confirmation, three of which came from barangays in Tarlac. And during the hearings, Mariano had to defend himself from the allegations that had direct involvement in the series of New People’s Army (NPA) attacks in Davao last April and his supposed links with the CPP. He denied all the accusations.

Although his rejection was expected by many, farmers’ groups expressed their dismay over his exit from the agency, saying it would only benefit the landlords and oligarchs in the country.

Interior Secretary Ismael Sueno lost his job in April over the alleged irregularity in the procurement of firetrucks from Austria without competitive public bidding.

But on top of that, Sueno reportedly had a row with three of his undersecretaries, who accused him of corruption, shielding a politician linked to illegal drugs and other wrongdoings. One of them was John Castriciones, who is now the DAR OIC.

He was sacked together with the four other commissioners, Melissa Aradanas, Joan Lagunda, Manuel Serra Jr., and Noe Indonto.

Ridon, a former representative of Kabataan Party-list, maintained that his trips abroad were officially sanctioned by the Office of the President.

READ: Duterte on firing Ridon: He traveled 7 times, rarely had meetings at PCUP

NIA chief Peter Laviña, Duterte’s campaign spokesperson, was sacked by the President in February over allegations of corruption.

Laviña allegedly received 40 percent kickbacks from contracts of the agency. He denied the allegations, emphasizing that he never betrayed Duterte’s trust.

Just five months into his job, DDB chair Dionisio Santiago was fired by Duterte in November not only because of publicly contradicting the chief executive but also for his supposed junkets abroad and favors from drug lords.

Days before he was sacked, Santiago said that constructing the mega-rehab center in Nueva Ecija was a “mistake.” The Malacañang, however, said it was not the sole reason for Santiago’s termination but also of the complaints about his trips overseas with his alleged mistress, friends, and favorite DDB employees.

He was also accused of receiving a house from suspected and slain drug lord Ozamiz City Mayor Reynaldo Parojinog.

Santiago suffered the same fate of his predecessor, Benjamin Reyes, who was sacked in May after contradicting Duterte’s statistics on the number of illegal drug users in the country.

But prior to her termination, DAP employees urged Duterte for her frequent personal and official foreign travels, allegations of mismanagement, and untoward attitude to employees. /je