Jinggoy Estrada: No plan yet to make me DAP witness | Inquirer News

Jinggoy Estrada: No plan yet to make me DAP witness 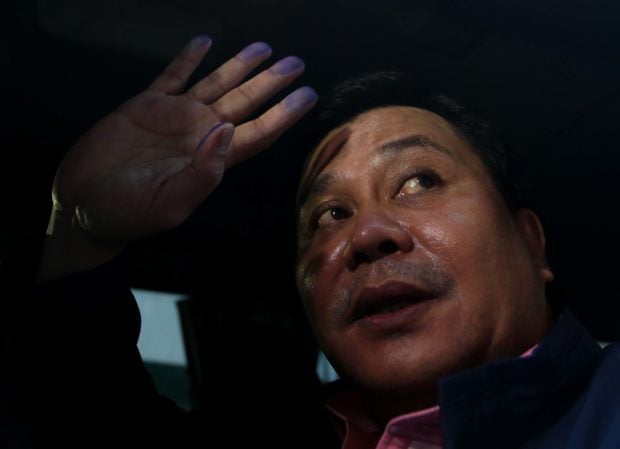 Former senator Jinggoy Estrada on Monday said he was not yet approached by the administration to testify as witness in the case build-up involving the alleged misuse of Disbursement Acceleration Program (DAP) funds.

Estrada attended his scheduled plunder trial on Monday as a free man, after the Sandiganbayan allowed him to post a P1.33 million bail from plunder.

In an interview after the hearing, Estrada said he has no knowledge yet about a reported plan of Justice Secretary Vitaliano Aguirre II to have him testify about the previous administration’s liability in the DAP anomaly.

“Wala akong alam doon. I haven’t heard of anything. Nobody has talked to me about it,” Estrada said.

He said his parents, former president now Manila mayor Joseph Estrada and mother former senator Loi Ejercito, are the happiest about his release from three years of detention.

He said that should he have been required to wait over the weekend to post his bail, he would have no problem with it, having come from being detained for three years at the Philippine National Police Custodial Center.

READ: Is processing of Estrada bail on a Saturday normal?

After receiving the favorable court resolution that granted his second bail plea, Estrada was allowed to post his P1.33 million bail on a Saturday at the Sandiganbayan.

Estrada’s plunder trial was cancelled Monday because of lack of quorum among the justices. It was reset to October 2.

READ: Jinggoy Estrada out on bail; Bong Revilla may be next

Estrada was allowed to post bail when the Sandiganbayan Special Fifth Division introduced the new doctrine brought about by the Supreme Court decision that dismissed the plunder case of former president Gloria Arroyo.

The anti-graft court said there is no strong evidence to show Estrada is the main plunderer, a jurisprudence set by the Arroyo case.

Estrada first blew the lid on the alleged misuse of DAP funds, which were allegedly given as incentives to senators who voted to convict the late Chief Justice Renato Corona in the latter’s impeachment trial.

READ: What is Jinggoy Estrada’s advice to Aquino amid DAP controversy?

But the Ombudsman cleared Aquino from liability and instead indicted his budget secretary Florencio “Butch” Abad for allegedly usurping the power of the purse of Congress in realigning the country’s savings under DAP. /je