(Updated, 10:38 a.m.) The camp of former senator Jinggoy Estrada posted a P1.33-million bail on Saturday at the Sandiganbayan for his temporary release from detention at the Philippine National Police Custodial Center in Camp Crame, where he had been detained since June 2014 for plunder and graft and corruption allegations.

Estrada’s camp, led by his lawyer, Alexis Abastillas-Suarez, posted the bail at 10 a.m. at the Sandiganbayan, which keeps a skeletal force on Saturdays for requests like posting of bail.

The camp paid a total of P1.3 million for his bail—P1 million for the plunder charge, and P330,000 for 11 counts of violations of the Anti-Graft and Corrupt Practices Act—and P23,350 for the legal fees.

Suarez, in an interview, said the anti-graft court’s decision to grant bail may be an indication that the case against the former senator was “not strong.”

“It’s an indication that’s why sinasabi niya ever since naman that the evidence against him is not strong,” Suarez said.

“Sana it will be an indication also for the granting of bail kasi the evidence given by the prosecution will also be the same evidence, will be adopted by the court during the trial of the case,” she added.

The senator posted bail a day after the Sandiganbayan Fifth Division granted his bail petition despite facing the non-bailable offense of plunder. 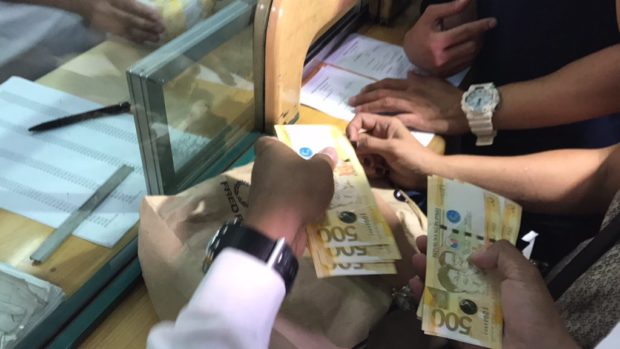 The anti-graft court said “there was no strong evidence” that Estrada was the “main plunderer” in the alleged P10-billion pork barrel scam.

It said that it was businesswoman Janet Lim-Napoles, tagged as the mastermind of the corruption scheme, who appeared to have the “extensive control” in the scam.

“Although there is evidence to show that there were glaring irregularities in the disbursement of accused Estrada’s PDAF allocations and that he received a sum of money from his participation in these irregularities, there is no strong evidence to show that he is the main plunderer within the contemplation of the plunder law and as alleged in the information,” the court said.

Last year, the court with a different composition of judges denied Estrada’s bail plea for lack of merit. /idl

READ: No bail for Jinggoy