No bail for Jinggoy | Inquirer News

No bail for Jinggoy 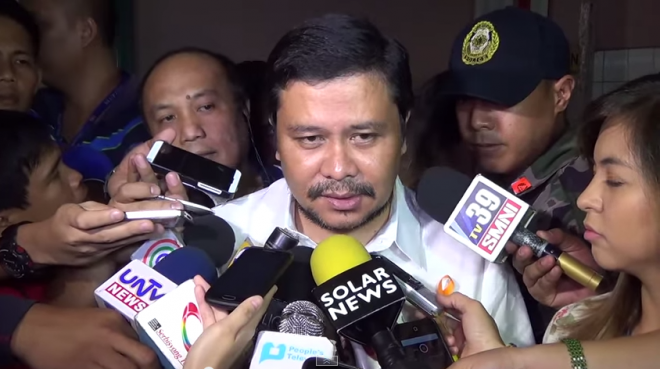 The Sandiganbayan on Thursday threw out the petition for bail of detained Sen. Jinggoy Estrada, who has been locked up in Camp Crame since June 2013 for his alleged role in the P10-billion pork barrel scam.

The antigraft court’s Fifth Division also denied a similar petition filed by businesswoman Janet Lim-Napoles, the alleged mastermind in the raid of the Priority Development Assistance Fund (PDAF), the official name of the lawmakers’ pork barrel.

In its 215-page resolution, the court gave credence to the testimonies of principal whistle-blower Benhur Luy, socialite Ruby Tuason and other state witnesses who admitted participating in the elaborate scam perpetrated by the fake nongovernment organizations (NGOs) founded by Napoles.

It said the Office of the Ombudsman was able to provide “strong evidence of guilt” against Estrada in support of its claim that he should be held liable for graft and plunder for receiving P183 million in kickbacks from Napoles.

“That the whistle-blowers were told of how Senator Estrada’s PDAF was allocated is relevant in their testimony on how the bogus NGOs operated as they were all part of the grand scheme,” the court ruled.

“Wherefore, the motion for bail filed by… Estrada is denied after finding that the prosecution presented a strong evidence of guilt against him,” it said.

The court also gave weight to Tuason’s testimony, who had admitted in open court that she delivered portions of Estrada’s kickbacks.

Said the court: “Even if Senator Estrada denies the delivery of funds to him by Tuason, fact is, Tuason is the lone witness who positively declared personally handing money to Senator Estrada from his PDAF.”

“This court has not heard any denial from Senator Estrada himself, and hence, between his unsubstantiated denial as against Tuason’s categorical and positive testimony, the latter prevails,” it stressed.

The court said the admission of Tuason, who served as social secretary of Estrada’s father, former President and now Manila Mayor Joseph Estrada, had remained “unrebutted.”

While Tuason could not recall the amount she had actually delivered to the senator, it said it “does not necessarily taint her credibility.”

It also played down Estrada’s argument that none of the whistle-blowers had personal knowledge of how he supposedly received his commissions from PDAF-funded projects of Napoles-owned foundations.

“For all these witnesses to have personal knowledge of how accused Estrada amassed wealth is actually contrary to the nature of plunder,” it said.

The court considered the report submitted by the Anti-Money Laundering Council, which scrunitized the bank accounts of Estrada, members of his family and his alleged dummies.

It also took note that Estrada did not declare “significant investments” in 2011 and 2012 in his statement of assets, liabilities and net worth which could explain how he had amassed his wealth.

Estrada, allegedly known by the alias “Sexy” in the ledger of suspected scam mastermind, surrendered to the police on June 23, 2014 but also immediately requested to be granted bail. He is accused of pocketing P183 million from the PDAF and of 11 counts of graft. If convicted, he would face life imprisonment. With a report from Marielle Medina, Inquirer Research