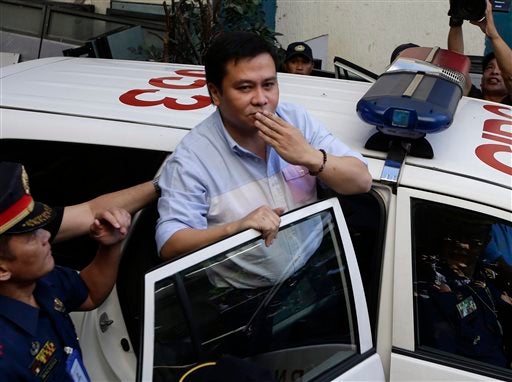 (Updated; this story was first published at 12:05 a.m. on September 16) The Sandiganbayan Special Fifth Division which granted the bail plea of former senator Jinggoy Estrada said there was no strong evidence to show he was the “main plunderer” in the alleged pork barrel scam.

In its resolution Friday, the anti-graft court said its resolution was a takeoff from the Supreme Court’s ruling that dismissed the Philippine Charity Sweepstakes Office plunder case of former president Gloria Arroyo

“Although there is evidence to show that there were glaring irregularities in the disbursement of accused Estrada’s Priority Development Assistance Fund (PDAF) allocations and that he received a sum of money from his participation in these irregularities, there is no strong evidence to show that he is the main plunderer within the contemplation of the plunder law and as alleged in the information,” the court said.

“Thus his admission to bail is in order,” it added. The court set a bail application of P1 million in cash.

In granting Estrada bail, the court cited the former senator’s political stature and prominence, and his voluntary surrender in 2014, to show that the probability of flight “is not that much.”

“The fact that he surrendered himself voluntarily to the authorities and remained in detention for almost three years now also negate the intention or inclination to evade the legal processes,” the court said.

While sources said the filing of a second bail plea is prohibited under court rules, the court in its latest resolution said the newest bail petition is not infirm because it was filed at a time a new jurisprudence was set by the Supreme Court decision on plunder in the Arroyo case.

“As the previous resolution denying bail predates the Arroyo case, the rulings in the latter case could not have been raised and considered when the bail petitions were resolved. The Arroyo case is a judicial decision by the country’s highest court interpreting the plunder law. This Court is duty bound to follow and apply the Supreme Court’s rulings in that case,” the court said.

The anti-graft court said it should also apply the Supreme Court’s ruling that a plunder charge should identify a main plunderer to be sufficient.

While the Fifth Division in 2016 denied Estrada’s first bail plea because of strong evidence of guilt, the Special Fifth Division (composed of new justices) said the prosecution’s evidence in the bail hearings “do not strongly show that the ones strongly identified as main plunderers are really the main actors or the masterminds of the scheme.”

The court in applying the “wheel of conspiracy” said the PDAF scam may have been facilitated through Estrada’s endorsement of the bogus foundations that implemented ghost projects, but it was Napoles who controlled these NGOs that were central to the scam.

“After going through the evidence presented in the bail hearings, it is not clear what conspiracy is present as shown by the evidence. It could be that as to Estrada’s PDAF allocation, he could be the central figure, considering that none of the transactions could ever be initiated and facilitated without his initial decision to proceed. But it cannot also be denied that the elaborate scheme is not his own doing, and is in fact the handiwork of accused Napoles,” the court said.

The court added that there is no basis to dismiss the case due to a defective information, because the charge sheet identifies a main plunderer, who is the mastermind Napoles.

The grant of Estrada’s bail plea, that reversed the court’s earlier denial of his bail, may set a “domino effect” on the related plunder cases of former senators Ramon “Bong” Revilla Jr. and Juan Ponce Enrile, sources feared.

Read Next
Transport exec berated by boss for taking ‘illegal’ motorbike ride
EDITORS' PICK
House energy committee chair Arroyo bats for cheap electricity
How not to retire as an ex-president
Lawmakers eyeing more changes in Maharlika plan
The vivo Y02 is now available in the Philippines for only PHP 5,299
Shop smarter with vivo’s big 12.12 holiday deals
Hidilyn Diaz wins only gold missing from her collection
MOST READ
Don't miss out on the latest news and information.