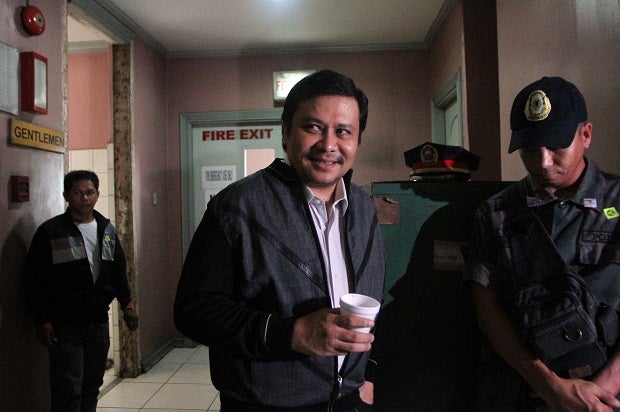 MANILA, Philippines – Detained-Senator Jinggoy Estrada may again be in hot water not just for plunder, but for possibly misdeclaring his wealth and laundering millions of alleged kickbacks from the pork barrel scam, according to a report by the Anti-Money Laundering Council (AMLC).

The AMLC is set to show its report to the Sandiganbayan on Monday during Estrada’s bail hearing.

In a 90-page report obtained by INQUIRER.net, the AMLC noted the following findings:

Estrada might as well brace himself for possible violation of the law on public officials’ Code on Conduct and Ethical Standards as the AMLC noted various discrepancies between his cash in banks and the cash on hand/in banks as declared in his SALN, making him liable for misdeclaring his wealth.

“(T)he rate of variance is at least 100 percent. Those variances are considered undeclaration of cash on hand/in bank in the SALN of Senator Estrada for the years 2006 to 2012,” the report said.

The report said the highest rate of variance was in 2009 when Estrada’s cash in his bank accounts amounted to P39.285 million when the declared cash on hand/in bank in Estrada’s SALN was only at P5.613 million – a rate of variance of almost 600 percent.

Included in the computation of his bank account is that of his wife Presentacion Ejercito. Under the law, the assets of a public official’s spouse should be considered in the SALN, AMLC said.

Meanwhile, Yenko issued the highest amount of checks to Ng worth P13 million, and to Estrada worth P2.18 million, AMLC said in its report. Yenko also transferred funds to the business listed in Estrada’s SALN as his business interests.

More controversial is Ng, who was spotted by the AMLC as receiving funds directly from a foundation linked to Napoles. What is perhaps more damning is that the same check was issued to Estrada himself in one of his bank accounts.

The report said around P10 million was debited in the account of Social Development Program for Farmers Foundation, Inc. (SDPFFI), a Napoles NGO which was presided by Luy, for a cashier’s check issued for Ng on April 13, 2010.

In what could be the most glaring link between Estrada and Napoles, this same check was issued for the PBCom account under Estrada’s name.

“In this instance, it is clear that the P10 million received by Ng from SDPFFI is for Senator Estrada, and Juan Ng was just a conduit and his account was a pass thru account,” the report said.

All in all, Ng transferred to Estrada 84 checks payable to cash amounting to P57.036 million.

The AMLC also found it suspicious that Ng used two different signatures in his bank transactions. In his more unconventional signature, the handwriting was even similar to the checks issued by Estrada himself. 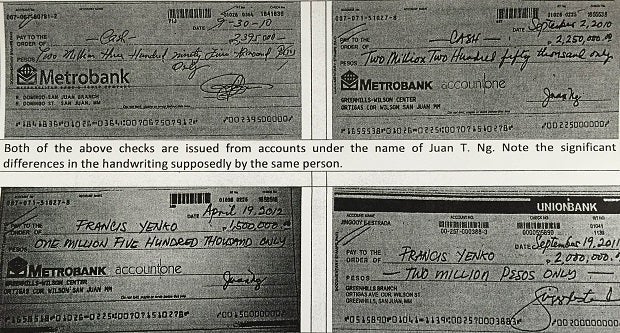 AMLC also noted that Estrada, Labayen, and Ng deposited millions of funds to their bank accounts around the time Luy recorded in his ledger that they received their alleged kickbacks from the scam.

While the other bank transactions did not match with Luy’s ledger, there were spot on similarities that raised AMLC’s eyebrows.

For one, Estrada deposited P2 million to his PBCom and Sterling Bank accounts on November 13, 2008 around the time another alleged conduit Ruby Tuason, who turned provisional state witness against Estrada, was said to have received P2 million from Napoles on October 16 and 28, 2008, according to Luy’s ledger.

Tuason has testified in a Senate probe that she delivered duffels of bags of kickbacks in Estrada’s Senate office. After going into hiding since the scandal blew, she returned to the country and became whistleblower due to her conscience.

Another, Estrada deposited P1 million in his Chinabank-Corinthian account on January 22, 2010 or around the time Luy said Estrada received P1 million from Napoles’ cash vault on January 6, 2010.

Labayen, who is Estrada’s deputy chief of staff who fled her plunder charges, was also alleged by Luy to have received P1.9 million from another Napoles NGO (Peoples Organization for Progress and Development Foundation or POPDFI) on March 8, 2010. Labayen’s brother Carl Dominic meanwhile received a fund transfer to his bank account amounting to P1.9 million, stemming from a debit memo under POPDFI for the same exact amount.

On April 20, 2010, Luy said he encashed P6 million from the Metrobank account of Masaganang Ani Para sa Magsasaka Foundation Inc. (MAMFI), another Napoles NGO. This encashment was confirmed by AMLC in the foundation’s bank account.

On the day of the encashment, Estrada made a cash deposit of P2 million on April 20 and P4 million on April 21, 2010. Notably, while Luy said in his ledger that the P6 million was given to Estrada in cash, Estrada’s deposits were also made in cash.

On March 15, 2012, Napoles’s Metrobank account was debited for a check issuance of P9.75 million for Ng, Luy said in his ledger. AMLC confirmed the debit memo of Napoles’ bank account, and added that Ng on the same day deposited the said check to his Metrobank-Greenhills account worth the very same amount of P9.75 million.

All in all, AMLC’ findings showed that “Within 30 days, from the dates mentioned in Luy’s summary of rebates, Senator Estrada, by himself or either through Pauline Labayen, Carl Dominic Labayen and Juan Ng, received commissions or rebates from his PDAF in an amount aggregating to P70.748 million.”

But this does not include other transfers which came from Ng, Yenko, and directly from Napoles and her corporation not included in Luy’s summary of rebates, totalling P86.875 million, AMLC said.

“Therefore, the total commissions or rebates received by Estrada from his PDAF amounted to more or less P157.623 million,” AMLC said.

According to Estrada’s plunder case before the Sandiganbayan, Estrada connived with Labayen and Napoles in pillaging at least P183.79 million from his PDAF.

AMLC noted that Estrada closed four (of his nine active bank accounts) with an aggregate closure balance of P76.446 million in September 2013, when the PDAF scam investigation was ongoing and public interest in the media was high.

Ng also closed three bank accounts supposedly controlled by Estrada around the time the PDAF scam investigation was ongoing – a Metrobank account in Greenhills with closure balance of P12.631 million closed on July 2013 (this same account was the one which received funds directly from Napoles and her coporations); two Metrobank Time Deposit accounts terminated on May 2013 (Jinggoy’s son Joseph Luis Ejercito was in fact made payee for the two accounts closure proceeds of $425,918.48); and a Metrobank account terminated on July 30, 2013 with total proceeds of P16.182 million (this account was the one which received as its initial deposit a check from Napoles).

AMLC said “there are indications of money laundering scheme using the aforementioned bank accounts.” “There is however a need to conduct further investigation to determine the extent of the subjects’ participation,” it added.