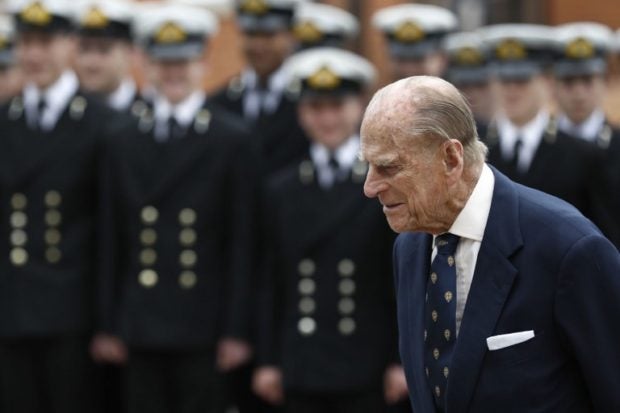 This file photo taken on May 09, 2017 shows
Britain’s Prince Philip, Duke of Edinburgh visits Pangbourne College, in Berkshire County on the occasion of the school’s centenary.
After a lifetime of public service by the side of his wife Queen Elizabeth II, Prince Philip will finally retire on August 2, 2017 at the age of 96. The Duke of Edinburgh will attend a parade of Royal Marines at Buckingham Palace, the last of 22,219 solo public engagements since she ascended to the throne in 1952.
AFP FILE PHOTO

LONDON—After a lifetime of public service by the side of his wife Queen Elizabeth II, Prince Philip will finally retire on Wednesday at the age of 96.

The Duke of Edinburgh will attend a parade of Royal Marines at Buckingham Palace, the last of 22,219 solo public engagements since she ascended to the throne in 1952.

He has attended countless more events with the queen, now 91, but both have slowed their pace in recent years, handing over responsibilities to the younger royals.

“Prince Philip is entitled to slow down a bit,” the Daily Telegraph newspaper wrote in an editorial, adding: “This is a man who has always put his country first.”

The former World War II naval officer has carried out 637 overseas visits on his own in the past 65 years, given almost 5,500 speeches, and was patron, president or a member of more than 780 organisations.

His final engagement on Wednesday will honor his military background, as he attends the end of a charity challenge in which Royal Marines ran 1,664 miles over 100 days to mark the founding of the commando force in 1664.

Philip has been captain general of the corps since 1953, taking over from the queen’s father king George VI, who had died the year before.

The queen has described Philip, her husband of almost 70 years who is now the longest-serving consort in British history, as “my strength and stay”.

But after announcing his plans to retire in May, he joked he was the “world’s most experienced plaque-unveiler”.

The prince’s often politically incorrect sense of humor has got him into trouble in the past, although for many of the queen’s subjects, it has also provided some welcome warmth into the institution of the monarchy.

“Humor is important. The Duke’s has brightened these decades,” the Telegraph said.

Philip is still in good health for a man of his age, although he was hospitalized for two nights in June for the treatment of an undisclosed infection.

A spokeswoman said his individual program of public engagements had come to an end, but “he may choose to attend engagements alongside the queen from time to time”.

When he announced his retirement, Prime Minister Theresa May offered him Britain’s “deepest gratitude and good wishes”.

Both the senior royals have taken a step back in recent years, leaving their eldest son and heir Prince Charles and grandson Prince William to take their places.

William, the Duke of Cambridge, ended his brief career as an air ambulance pilot last week and will now turn his full attention to royal duties, alongside his wife Kate.

But while the queen supports her husband’s decision to retire, experts say her own sacred vow at her 1953 coronation to serve for life was unbreakable.

“Her Majesty will continue to carry out a full program of official engagements with the support of members of the royal family,” the palace said earlier this year.