Faeldon: I wanted to quit 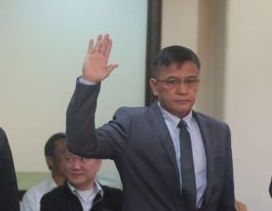 Customs Commissioner Nicanor Faeldon swears before the start of the House investigation on the P6.5-billion shabu that allegedly slipped into the country in May. INQUIRER FILE

Customs Commissioner Nicanor Faeldon on Wednesday admitted he wanted to quit amidst growing issues in Bureau of Customs (BoC), but insisted that he was on a mission to serve the country.

“You know I wanted to quit. The only qualification I have is that I say no to anyone who wants to influence me. I will continue to say no. I am here to serve our country,” Faeldon said in a press conference.

The Commissioner said President Rodrigo Duterte continued to trust him to run the Bureau of Customs’ (BoC) despite him being under fire for alleged mishandling of the case of 605 kilos of smuggled shabu.

Faeldon met the President in Malacanang Tuesday afternoon during an emergency meeting.

Several lawmakers are calling for Faeldon’s resignation after the P6.5-billion shabu shipment  passed the BoC without inspection and ended up in a warehouse in Valenzuela City in May.

During a hearing at the House of Representatives on Tuesday, the embattled Customs chief said he had been instituting reforms at the bureau and stopping major smuggling attempts.

Faeldon presented information which tended to show that his one-year stint at the bureau had almost matched some of the achievements of the previous administration for the past six years. CBB