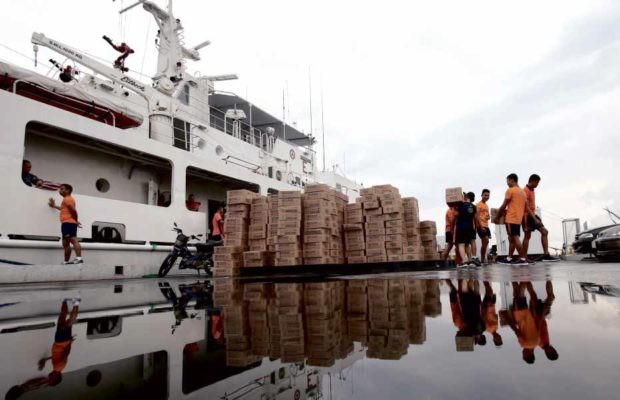 Boxes of relief supplies are loaded onto the BRP Pampanga as the flow of aid to residents of Marawi City continues.Other government agencies, like those involved in housing, had been ordered to do their share. —INQUIRER PHOTO

Cabinet Secretary Leoncio B. Evasco has ordered government housing agencies to use half of their gender and development (GAD) budgets to immediately help Marawi evacuees.

In a special meeting last month, Evasco ordered the agencies under the Housing and Urban Development Coordinating Council (HUDCC) to help women and children who fled Marawi and start planning for the city’s reconstruction.

He said the GAD funds could be used for hygiene kits and psychosocial support services for women in the evacuation centers.

Evasco noted that the Magna Carta for Women mandates government agencies to allot five percent of their budgets to GAD programs for gender issues and concerns but agencies were having difficulty utilizing their GAD budgets.

The housing agencies should reallocate half their current GAD budgets and all their remaining GAD funds from the previous year to help the women in evacuation centers, Evasco said.

The agencies under HUDCC include the National Housing Authority, the Social Housing Finance Corp., Home Development Mutual Fund (Pag-ibig Fund), the Housing and Land Use Regulatory Board, Home Guarantee Corp. and the National Home Mortgage Corp.

Evasco said he hoped other agencies would take the initiative and find a way to immediately help the Marawi evacuees.

Meanwhile, Vice President Leni Robredo has reacted to the annual audit report recently released by the Commission on Audit (COA), which stated that only P130 million — or about 60 percent of the 2016 funds given to help poor Filipinos — was used.

Reelection restrictions hindered her predecessor from spending much of the allocation for financial assistance, but the use of the funds “normalized” during the second half of the year under her watch, she said.

“When we assumed office, the use of the funds normalized again,” Robredo said in Filipino during Sunday’s episode of her radio program “BISErbisyong Leni” aired on RMN-dzXL 558 kHz.

Robredo said the spending of the funds “somewhat slowed down” from February 2016 during the run-up to the May presidential elections.

“Services somewhat slowed down. We were not seated yet,” she said.

Robredo also claimed that of the P219-million purse, only P151 million was actually released. This meant the utilization rate was actually 86 percent, instead of the 60-percent figure reported by the COA.

She said the unreleased allotments could still be used this year.

She stressed her office’s mandate to provide assistance to the poor through the Angat Buhay program, even bringing up the savings incurred from transferring the office from the Coconut Palace that served as the office during Binay’s time.