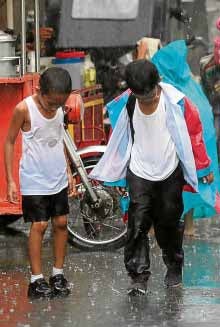 Scenes like this, of children walking in the rain from school, are common during the rainy season. —GRIG C. MONTEGRANDE

The Department of Health (DOH) appealed to the public to be ready for illnesses associated with the rainy season by taking precautions against the so-called “WILD” diseases.

He added: “If each of us will be ready in avoiding these diseases, then we can prevent getting sick this rainy season and we won’t have to be absent from work or school.”

Earlier, the state weather bureau announced the start of the rainy season, with three tropical cyclones expected to enter the country this July.

Diarrhea and cholera are considered to be waterborne illnesses which may spike during the rainy season.

Tayag reminded the public to ensure that their water supply is safe to drink by boiling the water.

“Expect diarrhea cases in areas where there’s contaminated water and where it rains often. There’s a chance that bad water sanitation might contaminate drinking water as well,” he said.

In addition, the DOH spokesperson reminded individuals, especially children, to get their antiflu shots.

Taking precautions, Tayag said, would help prevent influenza and other respiratory diseases that manifest themselves through symptoms like cough, colds, flu and fever.

Tayag made the appeal as the Philippine Atmospheric Geophysical and Astronomical Services Administration (Pagasa) said Tropical Storm “Emong” left the Philippine area of responsibility (PAR) on Monday although the southwest monsoon would continue to bring rains in Luzon and the Visayas.

In a forecast issued at 4 p.m. on Monday, Pagasa said Emong gained strength as it left PAR, packing sustained winds of 90 kph and gustiness of 115 kph.

Pagasa, however, warned that rains were expected in the Visayas and western section of Luzon because of the southwest monsoon.