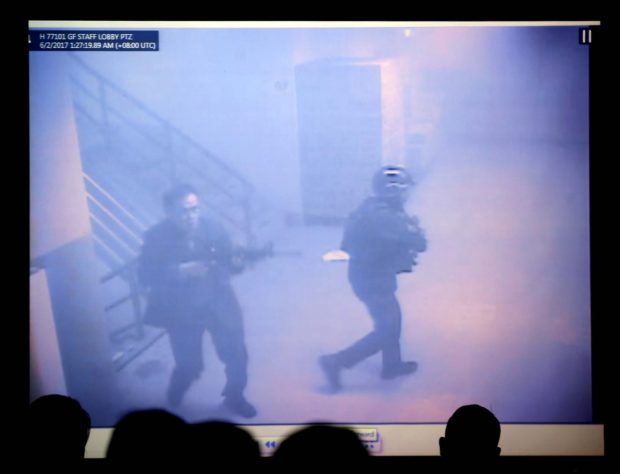 CCTV footage on the misencounter between police personnel and Resorts World Manila staff Bernard Cajigas (L) during the attack by gunman Jessie Javier Carlos at the RWM premises last June 2, 2017. Cajigas was shot by police responding to the site, contrary to his previous claim that he was shot by Carlos. A short part was shown to congressmen as requested by RWM officials during the second House inquiry into the Resorts World Manila incident last June 2, 2017 held in Congress.
INQUIRER PHOTO/LYN RILLON

There was an apparent “misencounter” between the SWAT team and a security personnel of Resorts World Manila at the height of the June 2 attack of a lone gunman at the hotel-casino complex, lawmakers learned Wednesday.

During the resumption of the House inquiry into the casino attack that killed 37 people, Resorts World Manila chief legal officer Georgina Alvarez showed to lawmakers the CCTV footage of two teams firing at each other in the hallway.

The footage showed that Bernard Cajigas, Resorts World security manager who led the special reaction team, shot at the SWAT members after Cajigas did not respond to the call of the police team.

“Some officers were coming from the other way. When they saw each other, they fired at each other… Nagkagulatan po sila, nagkasalubong,” Alvarez said, calling the incident a “misencounter.”

Cajigas was grazed by a bullet in the body  before he fell down the stairs as shown in another footage, Alvarez said, adding that Cajigas’ wound was not fatal.

Police inspector Freddie Mercado, who was part of the SWAT team, said they called on Cajigas to respond but he failed to do so.

Cajigas, who then was only wearing slippers and civilian clothes, fired first at the SWAT team, which later retaliated, lawmakers learned from the police.

The SWAT team also did not see the police officers accompanying Cajigas because they were out of sight, the police said.

Mercado said Cajigas was wounded before running off and apparently falling down the stairs.

“Nagkaputukan and then he ran off. And then after that, sir, hindi nag-appear, tumakbo silang lahat,” Mercado said.

Resorts World Manila chief operating officer Stephen James Reilly said the misencounter added to the confusion during a tense situation at Resorts World Manila, where most of the victims suffocated because they would not come out of their hiding places.

This because the gunman threw a bag of 300 rounds of ammunition at a burning casino table, setting off the bullets and giving the mistaken impression there were more than one gunman.

“It does show a degree of confusion between the groups on the ground communication,” Reilly said./ac

Read Next
Village councilor shot dead in front of wife in Sorsogon
EDITORS' PICK
Infants bundled off; no one hurt in PGH fire
Tired of your Wi-Fi signal problems at home? Here’s a solution!
OPINION: Mischief Reef – where it all started
POVA x Mobile Legends Bang Bang: A partnership that’s built to win
CPA Australia and their designation: Advance your career
Fire-damaged PGH calls for donations
MOST READ
Leonen impeachment case moves forward in House
Hot, humid weather for PH on Monday — Pagasa
Longest recession since Marcos era
Long working hours are a killer, WHO study shows
Don't miss out on the latest news and information.