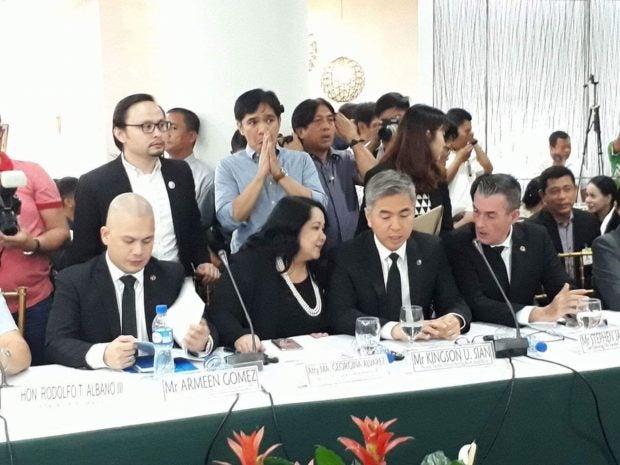 During the resumption of the House of Representatives inquiry into the casino attack, Resorts World Manila chief operating officer Stephen James Reilly insisted that their CCTV surveillance rooms were manned, even as the police insisted that there were no personnel at the time.

But Sr. Supt. Dionisio Bartolome Jr., Pasay city police chief, said that when the police was pursuing the gunman, Jessie Javier Carlos, they chanced upon a surveillance room with no personnel inside.

A Resorts World personnel who guided the police inside the casino could not pinpoint the locations being shown in the video bundles at the CCTV room saying he was only a perimeter guard, Bartolome said.

“We chanced upon a CCTV room, walang tao. Even the Resorts World guide, hindi niya masabi ano nakikita namin sa video bundle. When I asked why, he said he’s a perimeter guard. Even our guide can’t also tell us where the suspect was at the time,” Bartolome said.

Reilly refuted Bartolome’s statement, adding that he even has a picture to show that a security agent, Philippine National Police (PNP) officials, and a SWAT team were present in a surveillance room.

Reilly said of the three surveillance rooms, one was active while the other two were evacuated.

Antipolo Rep. Romeo Acop, chairperson of the public order and safety committee, corrected Reilly and said the personnel did not evacuate but abandoned the surveillance room.

“They did not evacuate. They abandoned their post. They were supposed to stay there,” Acop said.

National Capital Region Police Office director Oscar Albayalde said what Reilly was referring to was when Bartolome had already called for Resorts World to man one CCTV surveillance room.

Albayalde lamented that the police was “blind” initially because the Resorts World Manila management was able to lead the police to a secondary monitoring room later on, because all the other surveillance rooms were abandoned.

PNP chief Director General Ronald “Bato” Dela Rosa, who acted as ground commander during the casino incident, said he was told by Resorts World Manila security chief Armeen Gomez that the personnel in the surveillance rooms had evacuated due to presence of smoke.

“Upon my arrival, the first question I asked Mr. Armeen Gomez was: were all the guests evacuated? He said yes, and number two, where is your CCTV room? I want to monitor the situation. He told me in-evacuate namin, at wala nang tao doon kasi malakas yung usok,” Dela Rosa said.

Dela Rosa said Gomez then informed the police of another monitoring room at Remington Hotel where they were able to review the incident from the time the gunman barged in.

“I want to put that on record. Around 45 minutes, he offered me the CCTV monitoring room at Remington, that’s why we’re able to review yung mga pangyayari from start of the incident so walang naiwan sa CCTV room dahil malakas ang usok,” Dela Rosa said.

Resorts World Manila President Kingson Sian clarified Reilly’s statement, adding that what the chief operating officer only meant was that there was no point during the attack that all three surveillance rooms were abandoned.

This is because the surveillance room at Remington Hotel was manned at the time, Sian said.

During Wednesday’s hearing, lawmakers were also shown the CCTV footage showing the gunman leaving behind a bag of ammunition in a burning casino table.

Around 300 rounds of ammunition went off when the gunman threw them on the burning tables, causing bullets to fly everywhere between midnight and 12:30 a.m., giving the impression that there were many attackers that night.

Sian said most of the fatalities died of suffocation because they were too afraid to come out of hiding because of this mistaken impression.

READ: People died in RWM fire because gunfight prevented them from fleeing

Lawmakers during the earlier hearing noted the security lapses of Resorts World Manila, which was then manned by a lone lady guard even as the license required the casino to be secured with two guards.

The police had described Carlos as a gambling addict who was banned from all casinos and was deep in debt before he carried out the attack.

During the casino attack on June 2, Carlos went into the casino carrying a rifle and fired shots once he was inside. He went on to torch casino tables and looted P113.1-million worth of casino chips.

As security was in hot pursuit, Carlos holed himself up inside a hotel room and then burned himself to death.

The police have deemed the attack as a robbery instead of a terrorist act even though the Islamic State claimed responsibility for the attack.

Carlos, a former tax specialist at the Department of Finance, was dismissed by the Ombudsman for alleged ill-gotten wealth and faced a forfeiture case before the Manila Regional Trial Court. JPV

Parents of gunman in Resorts World attack ask for forgiveness