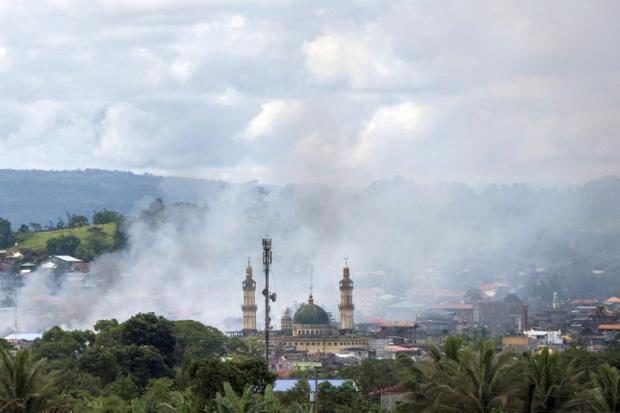 Smoke rises after aerial bombings by Philippine Air Force planes on Islamist militant positions in Marawi in Lanao del Sur in Mindanao on Thursday, June 6, 2017. With bomb-proof tunnels, anti-tank weapons hidden in mosques, human shields and a “mastery” of the terrain, Islamist militants holed up in a southern Philippine city are proving a far tougher opponent than military chiefs expected. (Photo by NOEL CELIS / AFP )

MANILA — The Armed Forces of the Philippines (AFP) has pledged not to bomb mosques occupied by Islamic extremists in Marawi City but has urged Muslim religious leaders to dissuade the gunmen from using mosques in their attacks, a military spokesperson said Wednesday.

Brig. Gen. Restituto Padilla, AFP spokesperson, said AFP Chief of Staff Eduardo Año had promised not to bomb mosques while asking religious leaders to dissuade Maute extremists from using the places of worship as staging grounds for their attacks.

“There’s a commitment on the part of the Armed Forces and the Chief of Staff himself that we will not bomb mosques,” Padilla said in a press briefing.

“But we call upon all religious leaders to more or less dissuade any of those that they may reach in those mosques from using those areas of worship as agents of war in this armed confrontation,” he added.

In a statement, the AFP said it respected places of worship and other cultural and heritage sites.

“As such the Chief of Staff of AFP gives his assurance that the AFP will do everything possible to protect and preserve these places. We do call on our religious leaders of every faith to call upon all parties to respect these places,” it said.

The military issued the statement after a military spokesman in Mindanao said on Tuesday that they were forced to target mosques in their surgical strikes because terrorists had taken refuge in these areas.

“As you can see, they are making these (mosques) as their logistical hub and snipers’ nest,” said Lt. Col. Jo-ar Herrera, spokesperson of the Army’s 1st Infantry Division.

However, the AFP in a statement categorically said yesterday that it “had not bombed and will not bomb mosques” in Marawi.

“The Armed Forces leadership is firm in its commitment to use other options that would flush out this Maute/Daesh-inspired group from these places of worship that they have converted into machine gun and sniper nest, defensive position, and arsenals for their war activities,” Padilla said, reading the AFP statement.

“The AFP assures our Muslim brothers and Islamic faithfuls that it will not go down to the level of these terrorists who desecrate places of worship to lure government security forces into responding to their
violent activities in a similar manner,” he added.

Padilla said they were confident that “through other options available to the Armed Forces,” government troops will be able to retake the remaining portion of Marawi occupied by thee terrorists.

“Please pass it on to our Muslim brothers and sisters who have since last night been clarifying the issue and so this categorical statements hopefully will put the questions that have been put forward to the Chief of Staff because of this news,” he said.  SFM

Read Next
Unknown number killed in massive London high-rise blaze
EDITORS' PICK
vivo brings to the Philippines a powerful smartphone with a slimmer body, the vivo Y02s for only PHP 6,499
Palace: Biggest supermarkets in PH commit to sell sugar at P70 per kilo
What to watch out for when selecting a video surveillance solution
Heads may roll at BOC, says Palace if sugar smugglers are allowed to use recycled import permits
House energy committee chair Arroyo bats for cheap electricity
DOH reports increase in daily COVID-19 deaths, mostly unvaxxed
MOST READ
Brian Poe-Llamanzares receives his PhD in Public Administration
Metro Manila’s No. 1 wanted man arrested, says NCRPO
Alyssa Valdez to miss Creamline’s AVC Cup campaign
DepEd to give teachers P5K cash allowance within first week of classes
Don't miss out on the latest news and information.