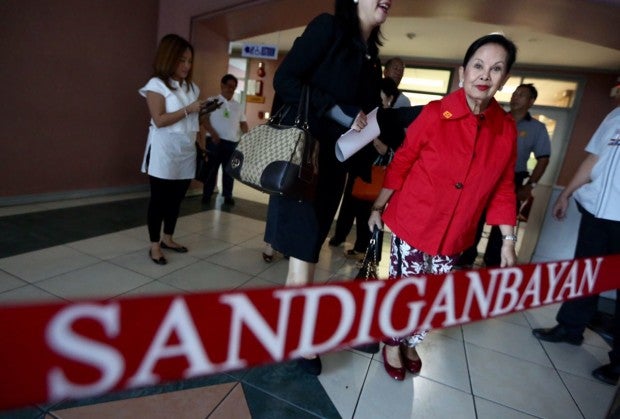 The Sandiganbayan Third Division has denied the motion of former Makati mayor Dr. Elenita Binay to defer all her previously scheduled graft and malversation hearings before the court.

In a resolution promulgated on April 18, the anti-graft court said Binay’s motion to defer proceedings had no merit, as “there is no sound reason for the Court to suspend the proceedings in these cases.”

In her motion, Binay asked the court to defer the proceedings until the Supreme Court resolves a petition for certiorari that she was planning to file to question the Sandiganbayan’s resolutions denying her motion to re-raffle her cases for separate trials, and denying her bid to have Presiding Justice Amparo Cabotaje Tang inhibit from the case.

The wife of former vice president Jejomar Binay filed a motion to defer the proceedings of her malversation and graft cases over the anomalous purchases of hospital beds and sterilizers, as the court scheduled the prosecution’s presentation of evidence on April 19 and 20 and May 16 and 17.

Binay however said that she was asking the court to defer the proceedings “in the interest of justice” and “to protect her constitutional rights,” and not “in any way intended to merely delay the proceedings.”

But the court, in a resolution penned by Cabotaje-Tang and concurred with by the two other members, said it could not defer the proceedings without a temporary restraining order issued by the Supreme Court.

The court cited its rules that a petition for certiorari does not stay the proceedings unless the Supreme Court issues an injunction.

While there are cases that the lower courts suspend the proceedings even without an injunction over “judicial courtesy” if the issues before the higher court would be rendered moot due to the continuation of proceedings, the Sandiganbayan said this is more an “exception rather than the rule.”

“In these cases, there is no pending petition for certiorari as accused Binay merely

intends to file one. Moreover, the said accused has not explained how the issues she will raise before the Supreme Court would be rendered moribund as a result of the continuation of the proceedings in these cases,” the court said.

Binay planned to elevate her appeal to the Supreme Court after the Sandiganbayan Third Division denied her motion to re-raffle the cases for separate trials and her motion to have Presiding Justice Tang inhibit from her case.

In her motion for inhibition, Binay asked Tang to inhibit herself from the case due to questions on her impartiality.

Binay through her lawyers cited an Oct. 13, 2016, hearing when Tang was personally offended when Binay filed an omnibus motion for a re-raffle of the case to hold separate trials.

Binay said she was “astounded” by the Tang’s “adverse reaction” that gave the impression she was “personally offended” by the motion for a re-raffle of the consolidated case.

Binay, who was mayor from 1998 to 2001, was charged with two counts of violation of Section 3 (e) of the Anti-Graft and Corrupt Practices Act for causing undue injury to the government and giving unwarranted benefits to a private party, and two counts of malversation of public funds under Article 217 of the Revised Penal Code.

The graft and malversation cases stemmed from the alleged irregularities in the procurement of hospital beds worth P36.43 million in 2001 and P8.83 million worth of dry heat sterilizers in 2000 for the Ospital ng Makati.

Binay sought Tang’s inhibition from the case following her victory in the other Sandiganbayan divisions.

Meanwhile, the Sandiganbayan Fourth Division acquitted her of graft in the alleged overprice of P13.25-million purchase of furniture for the city hall in 1999.

In 2011, the Sandiganbayan Second Division dismissed a graft case against her over allegedly overpriced furniture worth P58.04 million purchased from October to December 2000.

She still faces another graft case in the Fifth Division over the anomalous purchase of furniture and fixtures worth P72.06 million in 1999.

Meanwhile, her husband and her son former Makati mayor Jejomar “Jun-Jun” Binay Jr. also face graft, malversation and falsification of public documents charges over their role in the allegedly overpriced Makati car park building when they were Makati mayor.  CBB