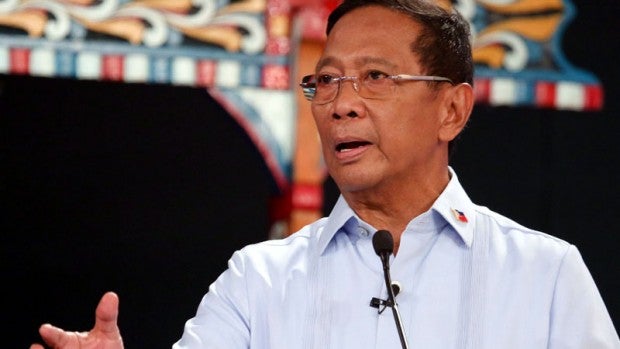 Former vice president Jejomar Binay Sr. was formally charged with malversation, graft, and falsification of public documents over the allegedly rigged procurement for the construction of the P2.28-billion Makati Parking Building II.

Binay Sr.’s son, dismissed Makati mayor Jejomar Erwin “Junjun” Binay Jr., was also included as a coaccused in his father’s malversation charge and in the two counts of Binay Sr.’s graft charges. Binay Jr. was earlier charged for graft and falsification of public documents in a separate case.

The charges against the former vice president were filed when his term ended upon the expiration of his immunity from suits.

Ombudsman prosecutors arrived at the docket section of the Sandiganbayan around 8 a.m. and delivered piles of documents.

Binay Sr. decried political harassment by the Ombudsman to derail his presidential bid, citing that he could not be investigated because he was immune from suit. The Ombudsman said it would file the charges only after his immunity from suit ends.

According to the charge sheet, Binay Jr. and Sr. face a malversation charge for misappropriating P11.011 million as payment to Mana Architectural and Interior Design (MANA) for the architectural design of the building and dispensing with public bidding to enter into a negotiated contract with MANA.

In its resolution finding probable cause against the two, the Ombudsman said the documents showed that Binay Jr. and Sr. had approved the Bids and Awards Committee resolutions, notices of awards, contracts and payments using unnumbered/undated disbursement vouchers and obligation requests despite glaring procurement violations.

The Binays released the payment to MANA despite its failure to submit the approved plans and specifications for the construction of the Makati car park building.

Binay Sr. also faces four counts of graft for causing injury to government and giving undue advantage to MANA, the winning firm for the architectural design, and Hilmarc’s Construction the firm for the construction of the building which started in 2007.

Binay Sr. and Binay Jr. were charged with one count of graft each for acting with manifest partiality, evident bad faith and gross inexcusable negligence when he awarded the design contract to MANA despite violations of procurement laws and failure to deliver the approved plans and specifications.

The prosecution said Binay Sr. entered into a contract with Hilmarc’s despite the absence of accepted and approved plans and specifications of the project.

“(The Binays) caused undue injury to the government by depriving Makati city of the opportunity to obtain the most advantageous offer for the project,” the prosecution said.

In connection with the falsification charges, Binay Sr. allegedly conspired with the city administrator and bids and awards committee members in falsifying two 2007 issues of the newspaper “Balita,” one 2008 issue, and one 2009 issue to make it appear that invitations to apply for eligibility and to bid (IAETB) were published “when in truth and in fact… said publisher did not do so, and no such IAETB was published.”

He was also accused of fabricating affidavits of publication to make it appear that the publisher authorized the publication of invitations to bid when in fact there were none.

He was also charged for allegedly falsifying the unnumbered BAC resolutions declaring Hilmarc’s as the bidder with the lowest calculated bid for the first three phases of construction.

The resolutions made it appear that invitations to bid were published and a public bidding was conducted even though these were “untruthful statements” embodied in the statement of facts of the resolution.

The Ombudsman earlier noted the following anomalies – the Bids and Awards Committee completed the procurement process for the building with undue haste or only 11 days; the procurement for the construction was awarded to Hilmarc’s Construction despite lack of invitations to bid with Hilmarc’s as lone bidder in four phases of the project; the construction also began despite the absence or approved design standards, contract plans, agency cost estimates, detailed engineering and programs of work; and the city officials and Hilmarc’s colluded to rig the public biddings.

Ombudsman Conchita Carpio Morales in an earlier interview said the office is still investigating Binay Sr. for plunder, a nonbailable offense of earning at least P50 million in ill-gotten wealth.

The former vice president was the subject of a year-long Senate Blue Ribbon investigation into the allegations of kickbacks from overpriced infrastructure deals in Makati.