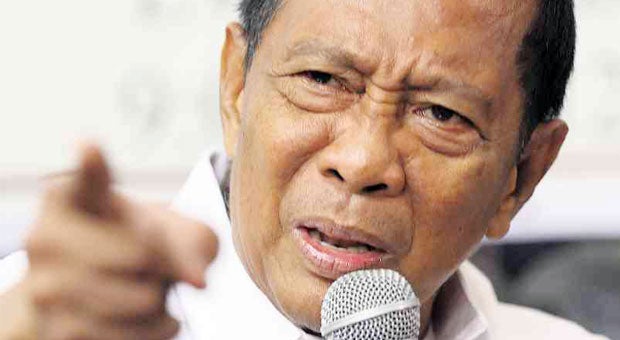 Vice President Jejomar Binay appealed to the Office of the Ombudsman to reverse its graft indictment against him over the allegedly overpriced Makati carpark building.

In a statement sent by his office which cited the motion for reconsideration, Binay through his lawyers said the Ombudsman’s finding of probable cause to charge him for graft is a political tactic to derail his presidential bid in 2016.

This is because the Ombudsman announced the graft indictment on Oct. 12, or just a few hours after Binay filed his certificate of candidacy for president with his running-mate Senator Gringo Honasan at the Commission on Elections.

“With the Questioned Resolution publicized and made the main topic of media coverage, one cannot help but conclude that it is calculated to destroy Respondent’s candidacy instead of achieving justice,” Binay said in his motion for reconsideration.

“The Questioned Resolution was served first to the media even before it was personally served on Respondent Binay,” his motion said.

Binay had criticized Ombudsman Conchita Carpio Morales of selective justice in targeting the administration’s opponents. A retired Supreme Court justice, Morales was appointed by President Aquino to the Ombudsman.

Binay maintained that as an impeachable officer, he cannot be charged by the Ombudsman for graft over the allegedly rigged procurement for phase 1 and 2 of the P2.28-billion Makati Parking Building II, deemed the country’s most expensive car park building.

His right to due process was also allegedly violated when the Ombudsman still approved the charges against him even though he as an impeachable officer can only be held accountable after his term.

“In proceeding with the investigation and subsequently issuing the Questioned Resolution, this Honorable Office clearly violated the Constitution and established jurisprudence on the matter. It acted without jurisdiction,” his motion said.

The Ombudsman pinned Binay in the allegedly rigged procurement because his signatures appeared in the approval of the Bids and Awards Committee recommendation for a negotiated procurement for the design and construction of the controversial building.

Binay maintained that he only signed the pertinent documents because it is only “ministerial” for him as then Makati mayor to sign these.

“It imputes guilt based on the minutest imperfections that could be conceivably found in the bidding process. The Questioned Resolution ascribes guilt to Respondent Binay even if he is not responsible for the bidding process and that he merely signed the BAC (bids and awards committee) Resolution and authorized payment/s as part of his ministerial duties,” his motion read.

Binay through his lawyers cited the Supreme Court decision Arias vs. Sandiganbayan which ruled that a public official “had every right to rely in good faith upon the recommendations of his subordinates.”

“We would be setting a bad precedent if a head of office plagued by all too common problems—dishonest or negligent subordinates, overwork, multiple assignments or positions, or plain incompetence is suddenly swept into a conspiracy conviction simply because he did not personally examine every single detail, painstakingly trace every step from inception, and investigate the motives of every person involved in a transaction before affixing, his signature as the final approving authority,” the Supreme Court ruling read.

Binay hit the Ombudsman for instilling in the mind of the public that he was already guilty of the crime when it found probable cause to charge him for graft.

“The Resolution is highly anomalous. On one hand, it creates the public perception in the minds of the public that Respondent Binay is indeed guilty of the crimes imputed against him. Hence, the finding of probable cause to order his indictment,” the motion read.

Vice President Binay is set to face four counts of violation of Section 3 (e) of the Anti-Graft and Corrupt Practices Act or Republic Act No. 3019, six counts of Falsification of Public Documents and one count of Malversation for his involvement in phases 1 and 2 of the carpark project.

While the Ombudsman approved the filing of charges, the Vice President as an impeachable officer can only be charged for graft after his term.

In its resolution, the Ombudsman said the documents showed that the Vice President and his son, dismissed Makati mayor Junjun Binay, had approved the Bids and Awards Committee resolutions, notices of awards, contracts and payments using unnumbered/undated disbursement vouchers and obligation requests despite the anomalies.

The Binays awarded the procurement of the design to Mana Architectural and Interior Design (MANA) despite lack of public bidding, the Ombudsman said.

The Binays also allegedly rigged the bidding to favor MANA and approved the release of P11.97-million payment to MANA despite the anomalies.

The Bids and Awards Committee also completed the procurement process for the building with undue haste or only 11 days.

Meanwhile, the procurement for the construction was awarded to Hilmarc’s Construction despite lack of invitations to bid with Hilmarc’s as lone bidder in four phases of the project.

The Ombudsman also noted collusion among city officials and Hilmarc’s to rig the public biddings.

Also set to face charges with the vice president is his son, who had been ordered dismissed and perpetually barred from public office in connection with his administrative offense for misconduct and dishonesty for allegedly rigging the bidding for the construction and design of the Makati carpark building project.

While the Binays face graft probe, his running-mate Honasan faces a malversation and graft complaint before the Ombudsman in connection with the pork barrel scam.

Vice President Binay faces five plunder and graft complaints before the Ombudsman over the alleged anomalies involving the Makati Parking Building II, Makati Science High School Building, University of Makati, a Fort Bonifacio property, and over an allegedly anomalous land deal between the Alphaland and the Boy Scouts of the Philippines, where Binay is long-running President. Binay decried political harassment by his detractors in the allegations. IDL