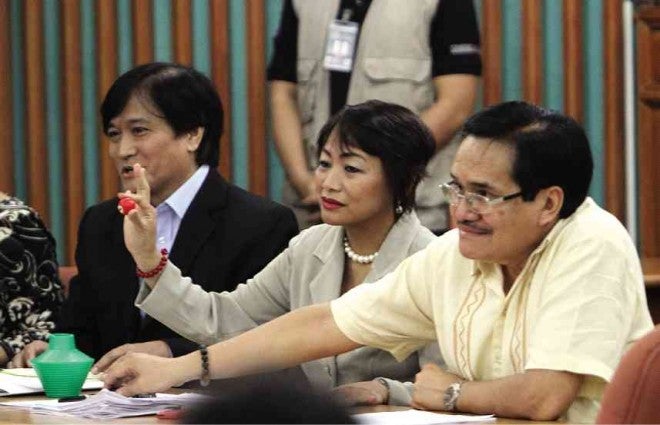 Former Makati mayor Dr. Elenita Binay was not yet done with her bid to inhibit Sandiganbayan Presiding Justice Amparo Cabotaje Tang from her cases in court.

This as she appealed the Sandiganbayan Special Third Division’s resolution dismissing her motion to inhibit Tang from her malversation and graft cases over the anomalous purchases of hospital beds and sterilizers.

“With all due respect, the Honorable Presiding Justice’s denial of the Motion for Inhibition should be revisited and reconsidered,” Binay said through her lawyers.

Binay said she took exception with the court’s pronouncement that her earlier motion for a re-raffle of her cases to other divisions was meant to delay the disposition of the case.

She said Presiding Justice Tang’s pronouncement only gives credence to her alleged prejudice in her case, Binay said.

“This unjust pronouncement is another evident indication of the Honorable Presiding Justice’s personal and prejudiced treatment of the case,” Binay said.

Binay reiterated her position about Presiding Justice Tang supposedly taking offense in her motion for re-raffle, which the justice in a hearing interpreted as having the effect of a motion for inhibition.

“The seemingly personal take of the Honorable Presiding Justice… affects the fundamental fairness of the trial to which Accused will be subjected to,” Binay said.

“There is no valid or just reason for the Presiding Justice to voluntarily disqualify herself from hearing these cases,” the resolution read.

The court added that Binay’s allegations of Tang’s alleged “bias” and “tenor and language” do not show there was “prejudgement” in hearing the cases.

“Allegations and perceptions of bias from the mere tenor and language of a judge (are) insufficient to show prejudgement,” the court said.

The court added that granting Binay’s motion for Tang to inhibit from her cases would “open the floodgates to abuse.”

“Unless there is concrete proof that a judge has a personal interest in the proceedings, and that his bias stems from an extrajudicial source, this Court shall always commence from the presumption that a magistrate shall decide on the merits of a case with an unclouded vision of its facts,” the court ruled.

According to the Rules of Court, a judge may be disqualified from a case if he or she is “pecuniarily interested” as heir, legatee, or creditor, or if he or she is related by sixth degree of consanguinity to either party, or by fourth degree to a counsel.

The denial of Binay’s motion paves the way for the continuance of her trial, which was suspended last Nov. 22 to enable the court to decide on her motions.

In her motion for inhibition, Binay asked Tang to inhibit herself from the case due to questions on her impartiality.

Binay through her lawyers cited an Oct. 13, 2016, hearing when Tang was personally offended when Binay filed an omnibus motion for a re-raffle of the case to hold separate trials.

The court also denied this motion for re-raffling the cases.

According to the transcript, Tang felt like the defense panel was questioning the court’s impartiality.

“If you are saying that there should be appearance of impartiality, you are somehow casting aspersions on the impartiality of this court,” Tang said during that hearing.

Binay said she was “astounded” by Tang’s “adverse reaction” that gave the impression she was “personally offended” by the motion for a re-raffle of the consolidated case.

“With all due respect, herein, Accused submits that the foregoing statements of Presiding Justice Cabotaje-Tang give an appearance of bias and prejudice as to the handling of the cases,” Binay said in her motion.

“The demeanor of the Honorable Presiding Justice affects Accused Binay’s confidence that she will get a fair trial that respects her constitutional rights,” she added.

Binay asked the court to grant her motion for Tang to inhibit from the case “to rest all the apprehensions as to the personal inclinations of the Honorable Presiding Justice” and to “uproot vestiges of doubt on the impartial disposition of the cases against her.”

Binay, who was Makati mayor from 1998 to 2001, was charged with two counts of violation of Section 3 (e) of the Anti-Graft and Corrupt Practices Act for causing undue injury to the government and giving unwarranted benefits to a private party, and two counts of malversation of public funds under Article 217 of the Revised Penal Code.

The graft and malversation cases stemmed from the alleged irregularities in the procurement of hospital beds worth P36.43 million in 2001 and P8.83 million worth of dry heat sterilizers in 2000 for the Ospital ng Makati.

Binay sought Tang’s inhibition from the case following her victory in two other Sandiganbayan divisions.

The Sandiganbayan Fourth Division acquitted her of graft in the alleged overprice of P13.25-million purchase of furniture for the city hall in 1999.

The court recently dismissed Binay Sr.’s similar motion for a re-raffle of the case. CDG/rga