CPP says US involved in Abu Sayyaf attack in Bohol

The Communist Party of the Philippines (CPP) on Friday accused the United States of being behind the Abu Sayyaf attack in Bohol.

“The news stories regarding the supposed arrival and presence of members of the Abu Sayaff criminal bandit group in Bohol island smacks of a US yarn,” the CPP said in a statement.

It questioned statements from the Philippine government and called the military operations “overkill.”

“The AFP media office, known for spinning fake news stories, has produced a highly dubious story of no less than 60 fully armed men who traveled three hundred kilometers by boat from Sulu to Bohol, unhampered by the whole AFP establishment, then upstream to a place unknown to them with only a general plan to ‘target tourists,’” the CPP said.

Earlier this week, members of the Abu Sayyaf arrived in Inabanga, Bohol.

Units of the Armed Forces of the Philippines (AFP) were later deployed in a bid to neutralize the bandit group. Residents evacuated amid the firefight.

Abu Sayyaf leader Abu Rami was identified as one of those killed.

An Inquirer report said some of the people killed who were identified as bandits were later revealed to be residents.

The CPP said it was suspicious that the US issued a travel advisory days before the incident, warning its citizens against traveling to Cebu and Bohol because of a “terror threat.”

“This story is a typical of the tall tales spun by the US Central Intelligence Agency and their conspirators within the Philippine defense and security establishment,” it said.

The CPP, which has been waging the longest communist insurgency in Asia, alleged that the Abu Sayyaf has “long been collaborating with the AFP and the US military.”

It claimed that the Abu Sayaff was actually formed by “a group of armed men recruited by the US military to join the Taliban group which waged a CIA-hatched ‘jihad’ against the then Soviet-supported Afghanistan government.”

It said the Abu Sayaff has been used by the US and the AFP to discredit groups in Mindanao that are calling for self-determination or autonomy.

“It has been used to carry out terrorist bombings and other dirty jobs for the CIA to justify its ‘war on terror’ and the presence of US foreign troops in the country,” the CPP said. “Its bandit activities, mainly kidnapping-for-ransom, has been lucrative for the Abu Sayaff ringleaders and their AFP handlers.”

The CPP claimed that the recent incursion of the Abu Sayyaf will be used by the US military to increase its presence in the Visayas. /atm 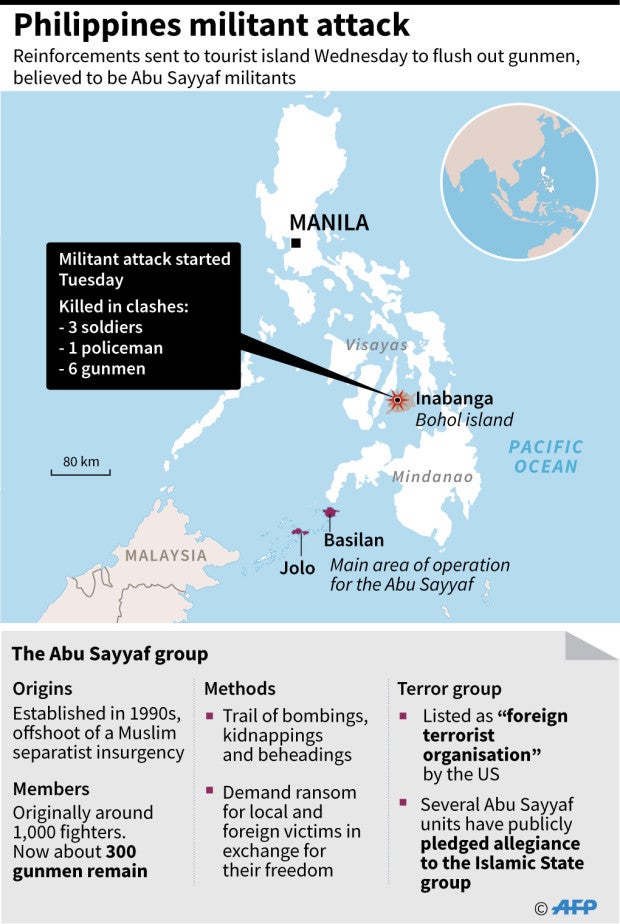 Map of the Philippines locating Bohol island where at least 10 people were killed in clashes between security forces and suspected members of Abu Sayyaf Tuesday. Includes factfile on Abu Sayyaf group. AFP