WHO: Smoking to kill 200 million in China this century 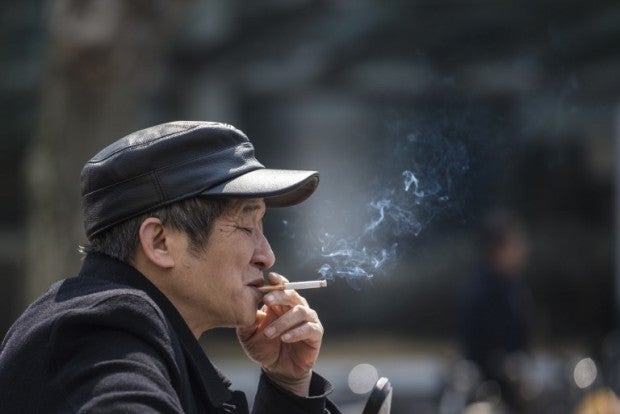 In this photo taken on February 28, 2017, a man smokes a cigarette on the streets in Shanghai.
Shanghai widened its ban on public smoking March 1 as China’s biggest city steps up efforts to stub out the massive health threat despite conflicts of interest with the state-owned tobacco industry. / AFP PHOTO / Johannes EISELE

Smoking-related diseases will claim 200 million lives in China this century and plunge tens of millions into poverty, a report said Friday.

China is the world’s largest consumer and producer of tobacco, and the industry provides the government with colossal sums.

But a report by the World Health Organization (WHO) and United Nations Development Program (UNDP) said Friday that the Asian giant will suffer an economic toll if it does not urgently reduce its smoking population.

The paper — called “The Bill China Cannot Afford” — estimated that the total annual economic cost of tobacco use in the country in 2014 was 350 billion yuan, up tenfold from 2000.

“If nothing is done to reduce [the death rate] and introduce more progressive policies, the consequences could be devastating not just for the health of people across the country, but also for China’s economy as a whole,” WHO China representative Bernhard Schwartlander said in a statement.

The calculation includes both the direct costs of treating tobacco-related illness and the indirect costs such as lost work productivity.

“The rapid increase in costs associated with tobacco use in China is unsustainable,” Schwartlander added.

Twenty-eight percent of all adults and 50 percent of men in China are estimated to smoke regularly.

Rural-to-urban migrants are more likely to be smokers, the report said, adding that they risk descending into poverty when smoking-related medical costs become too great — a reality at odds with the government goal of eradicating poverty nationwide by 2020.

The organizations recommended a smoke-free policy across the country akin to laws in Beijing and Shanghai, where smoking is banned in most public places.

However, enforcing anti-smoking measures can be difficult in China as the state-owned China National Tobacco Corp, which enjoys a near-monopoly, shares offices and senior officials with the national tobacco regulator.

A 50 percent increase in the retail price of cigarettes would prevent 20 million premature deaths over 50 years, the report said.