(Updated, 12:59 p.m.) An Abu Sayyaf leader was among those killed in a firefight with government security forces in the tourist island of Bohol, the Armed Forces of the Philippines (AFP) said on Wednesday.

In a press briefing in Bohol, the AFP confirmed the death of Abu Sayyaf sub-commander Muamar Askali alias “Abu Rami,” saying it would conduct a DNA test to verify his identity. Abu Rami’s death was earlier announced by the Regional Intelligence Division (RID) or Police Regional Office 7.

Abu Rami had been blamed for the beheadings of two Canadians and a German hostage and was apparently attempting another kidnapping mission, the military chief said Wednesday.

AFP chief of staff Gen. Eduardo Año told The Associated Press (AP) that troops have recovered and identified the remains of Abu Rami at the scene of the battle in a far-flung coastal village in Bohol island, where five other Abu Sayyaf gunmen were also killed, along with four soldiers and policemen. They apparently had traveled there on another kidnapping mission. 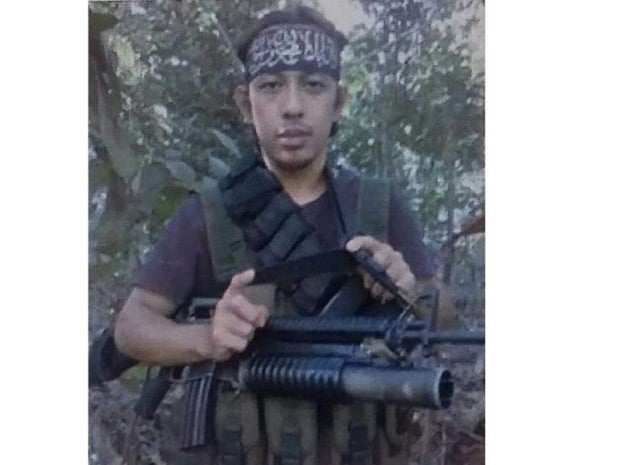 Abu Rami was an emerging hard-line leader of Abu Sayyaf and had pledged allegiance to the Islamic State group. He had received bomb-making training from Malaysian Zulkifli bin Hir, or Marwan, a top Southeast Asia militant leader who was killed in 2015, according to a police profile.

“This is a major blow to the Abu Sayyaf,” Año told The AP. “If they have further plans to kidnap innocent people somewhere, they will now have to think twice.”

AFP Major Gen. Oscar Lactao said the military was looking into several circumstances on how Abu Rami and his men arrived in Inabanga, Bohol as clearing operations continue. 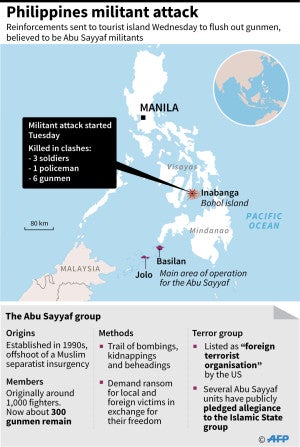 Map of the Philippines locating Bohol island where at least 10 people were killed in clashes between security forces and suspected members of Abu Sayyaf Tuesday. Includes factfile on Abu Sayyaf group. AFP

The firefight in Sitio Ilaya, in the remote village of Napo left six suspected Abu Sayyaf members, three soldiers, and one policeman dead, and about 1,200 displaced from their homes. More than 24 hours since the clash started, government security forces have cordoned off the village some 10 kilometers from the national highway as Special Action Force troopers from Manila arrived in the area.

Despite the terror threat, Lactao maintained that Bohol was the “safest place on earth” as he urged residents to remain vigilant.

“The threat of terrorism is always there, but our country, our government is resilient. The resiliency of the local gov’t and community is the best defense against terrorism,” he said.

“Return to normalcy is the best antidote versus terrorism. We are assessing the situation, checking on needs of displaced residents. Bohol is a peaceful province. We maintained our composure,” Lactao added.

It’s the Abu Sayyaf’s first known attempt to carry out ransom kidnappings deep in the heartland of the central Philippines, far from its jungle lairs in the southern provinces of Sulu and Basilan.

While the bold kidnapping attempt appears to have been foiled, the militants’ success in penetrating the bustling region of beach resorts and other popular attractions could raise concern among tourists and businessmen.

The US Embassy in Manila had earlier advised Americans to take precautions amid “unsubstantiated yet credible information” of possible kidnappings by terrorists in Bohol and other central areas.

The United States and the Philippines both list Abu Sayyaf as a terrorist organization for bombings, kidnappings for ransom and beheadings.

Abu Sayyaf militants have crossed the sea border with Malaysia on powerful speedboats and kidnapped scores of foreign tourists in past years, reflecting their growing capability and desperation for money. In 2001, they sailed as far as western Palawan province, where they seized 20 people, including three Americans, from a resort.

Philippine President Rodrigo Duterte has ordered troops to destroy the extremists and has threatened to declare martial law in the country’s south if the threat posed by the Abu Sayyaf and other extremist groups aligned with the Islamic State group gets out of control.

Although Abu Sayyaf have been weakened by years of battle setbacks, they beheaded two Canadians last year and a German hostage earlier this year after ransom deadlines lapsed. Askali was involved in those kidnappings and the captives’ gruesome murders, Ano said.

The militants are still holding at least 29 captives in Sulu’s jungles, many of them foreign tugboat and cargo ship crewmen seized in the seas surrounded by southern Philippines, Malaysia and Indonesia. with a report from the Associated Press. IDL