At least nine people were killed on Tuesday in a gun battle between government troops and suspected Abu Sayyaf bandits in Bohol province, far from the terrorists’ southern jungle bases and in a region where the US government had warned the gunmen might carry out kidnappings.

Five Abu Sayyaf bandits, three soldiers and a policeman were killed in the gun battle in the mountain village of Napo, Inabanga town, according to a joint statement issued by Chief Supt. Noli Taliño, head of the Police Regional Office in Central Visayas, and Lt. Gen. Oscar Lactao, chief of the military’s Central Command.

Director General Ronald dela Rosa, the chief of the Philippine National Police, said troops and policemen attacked the bandits early Tuesday in Inabanga, where the gunmen had arrived aboard three fast boats.

She said residents of Napo reported the presence of the armed men to the police, who immediately sent officers and soldiers to the area.

Dela Rosa said the intruders took cover in three houses as the firefight broke out.

The firefight started around 5:20 a.m. on Tuesday and was still raging late in the afternoon.

The Philippine Air Force joined the fray in the afternoon, dropping bombs on the gunmen’s location.

As of 4:40 p.m., nine bombs had hit the area, shaking the ground as they exploded.

The more than 60 bandits had either been forced out or killed in the two houses and the others were holed up and surrounded by government forces in the third house, Dela Rosa said.

If it is proven that the gunmen were from Abu Sayyaf, it may be the bandit group’s first known attempt to carry out ransom kidnappings deep into the heartland of Central Visayas, far from its jungle lairs in the southern provinces of Sulu and Basilan. 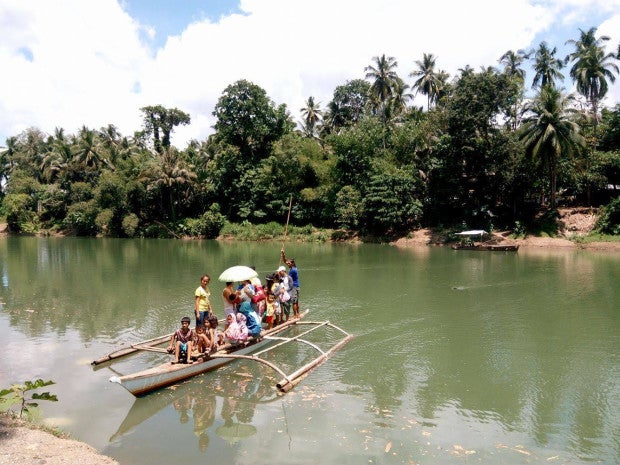 Abu Sayyaf bandits have crossed the sea border with Malaysia on powerful speedboats and kidnapped scores of foreign tourists in past years.

“Based on the information, they arrived in the area in boats, which is the modus operandi of the Abu Sayyaf. If they were New People’s Army, they would have arrived by land. So most likely, they are Abu Sayyaf,” Dela Rosa told reporters.

“If we were not able to monitor this and engage them with our government forces, it’s a cause for alarm if they were able to carry out kidnappings,” he said.

The US Embassy recently advised Americans to take precautions amid “unsubstantiated yet credible information” of possible kidnappings by terrorists in Bohol, nearby Cebu province and other areas in Central Visayas.

The Australian Embassy also warned its citizens about possible kidnappings by “terrorist groups” in Central Visayas.

On Tuesday, the British Embassy issued a similar warning to its citizens in the Philippines. 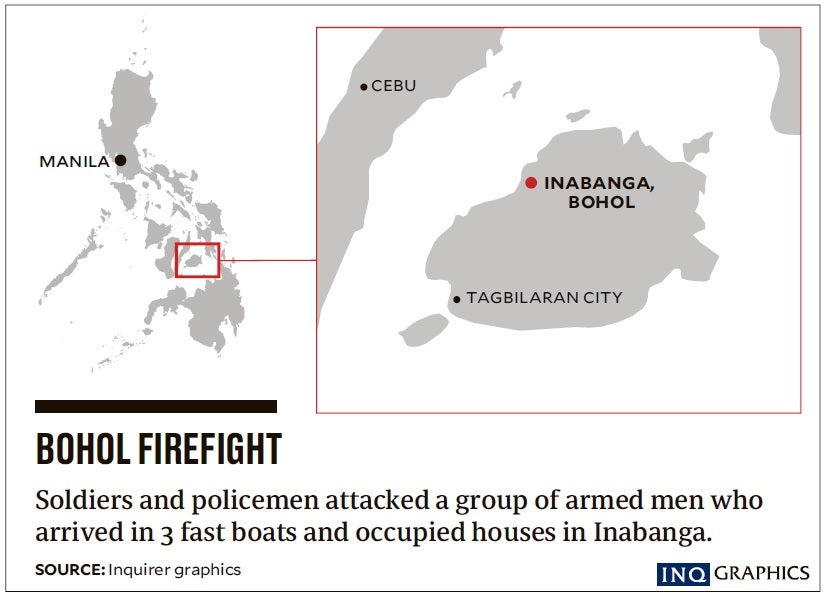 Dela Rosa said he could not say whether the gunmen were the group referred to in the US Embassy advisory.

He said the threat monitored by the Central Visayas regional police was an Abu Sayyaf plan to kidnap people in the region.

“But it did not say where or when. The threat was generic, general and nothing specific. If this is confirmed to be Abu Sayyaf and it’s confirmed that their purpose is to kidnap [people] in Cebu and Bohol, then that’s it,” he said.

“As of now, our men on the ground are saying that these are Abu Sayyaf members. We still don’t know the situation of the enemy if they have been killed or they have been able to run away,” he added.

Dela Rosa on Monday confirmed a terrorist threat to kidnap tourists in Central Visayas, but gave assurance that the police had taken steps to protect tourists traveling to the region.

He said the PNP had monitored the threat that led to the US Embassy advisory.

Gen. Eduardo Año, the Armed Forces of the Philippines chief of staff, told The Associated Press (AP) that military intelligence operatives had been trying to track down the movements of the suspected Abu Sayyaf bandits, who first traveled from Sulu to southern Zamboanga Peninsula.

The attack on Inabanga came a day after Año said the military did not see any terror threat in central Philippines despite the US Embassy warning.

President Duterte, speaking at a news conference in Davao City before leaving for a three-country tour of the Middle East on Monday, also played down the US Embassy warning, saying the government could handle any terror threats. 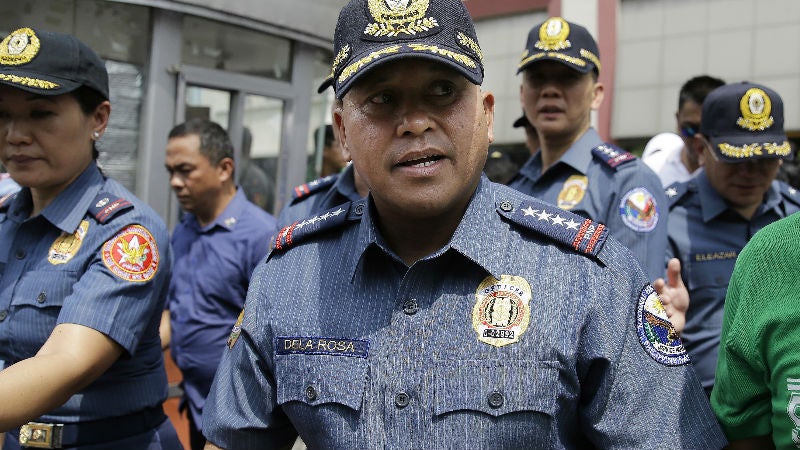 Philippine National Police Chief Ronald dela Rosa walks after an anti-terror simulation exercise at a bus terminal in Quezon city, north of Manila, Philippines on Tuesday, April 11, 2017. Dela Rosa said at least several people have been killed in battle between government forces and suspected Abu Sayyaf militants on a central resort island, far from the extremists’ southern jungle bases and in a region where the U.S. government has warned the gunmen may be conducting kidnappings. (AP Photo/Aaron Favila)

The United States and the Philippines have separately blacklisted the Abu Sayyaf as a terrorist organization for bombings, kidnappings for ransom and beheadings.

Some Abu Sayyaf commanders have pledged allegiance to the Islamic State group of jihadists in Iraq and Syria.

Mr. Duterte has ordered the military to destroy the Abu Sayyaf in Sulu and in outlying island provinces.

In Riyadh, Saudi Arabia, where Mr. Duterte was visiting, presidential spokesperson Ernesto Abella on Tuesday declined to confirm whether it was the Abu Sayyaf behind the attack in Inabanga.

“We still have to further clarify the identity of those behind the attack. We’ll wait for (National Security Adviser Hermogenes) Esperon and Defense Secretary (Delfin) Lorenzana,” he said.

Col. Edgard Arevalo, chief of the AFP public affairs office, praised the residents of Napo for alerting the military to the arrival of the gunmen.

He said cooperation between communities and security forces was important in containing the spread of terrorism from Mindanao to nearby places.

Read Next
Brother of self-confessed drug ring bagman killed in Bacolod
EDITORS' PICK
A delightful blessing!
Gov’t plans to open COVID-19 vaccination for 5- to 11-yr-olds by January 2022
Gov’t eyeing COVID-19 vaccine booster for essential workers, indigents by Dec. 10
Villar Group gears up for AllValue Shopping Party on Dec. 3; around P 1-million promos and discounts up for grabs
Omicron variant detected in more countries as scientists race to find answers
Legarda: Ending Violence Against Women, a cause for all
MOST READ
Omicron poses ‘very high’ global risk, countries must prepare–WHO
Quiboloy warns of ‘much worse than Omicron virus’ if his ‘persecution’ is not stopped
Bongbong Marcos’ conviction in tax case not a crime involving moral turpitude — lawyer
Marcoleta defends pol ads on ABS-CBN
Don't miss out on the latest news and information.